City Feed Unite experienced energizing labor and community solidarity at their first union rally in Jamaica Plain, Massachusetts, April 24. The rally took place down the street from City Feed and Supply, a local high-end grocery store and cafe with two locations and approximately 40 employees. The store sells “fair trade” products and union-made merchandise but has not yet welcomed a union of their own workers. 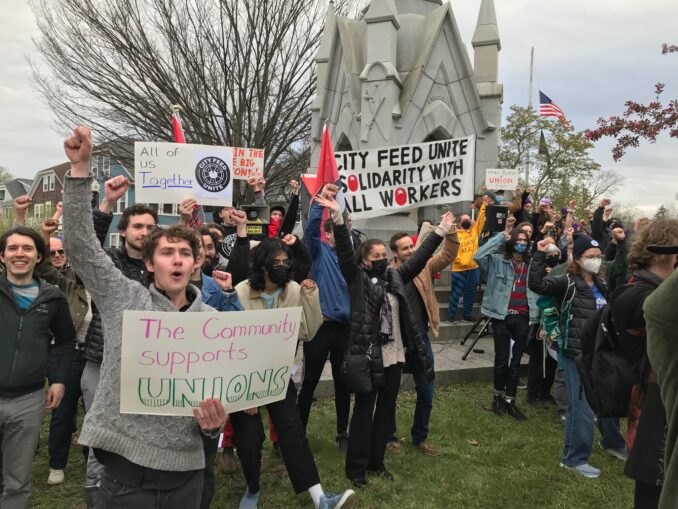 CFU has joined the wave of baristas filing for unions in the past year. From Starbucks to Pavement to Darwin’s Coffee, workers are demanding a seat at the bargaining table. CFU has organized under the Industrial Workers of the World Boston. The rally was called in response to the owners’ refusal to voluntarily recognize the union two weeks prior, despite the outpouring of support and excitement from customers, local residents, and union organizers across the city.

According to CFU organizer Emery Spooner who opened the rally, the demands of the union include “health care for each and every worker, so we can afford to go to the doctor, guaranteed paid sick time if we are infected with COVID-19, a workplace that is consistent and transparent [around wages] and basic dignity and respect on the job.”

CFU announced the formation of their own union, while gaining immense inspiration from the thousands of Amazon and Starbucks workers organizing against inadequate benefits and treatment by their billionaire bosses. They assert that small-business employees should be guaranteed the right to “agency and self determination over working conditions and our own well-being.”

Boston being a union town, representatives from the Boston Teachers Union; the Boston School Bus Drivers, Steelworkers Local 8751; the Coalition of Black Trade Unionists; unionized coffee shops; and leftist groups Workers World Party, Socialist Alternative and DSA came to demonstrate that they have CFU’s back!

Jamaica Plain resident and revolutionary musician Evan Greer opened their performance at the rally with a lively rendition of “Which Side Are You On?” which stated that “no business should be afraid of a union unless they’re exploiting their workers. At Amazon and Starbucks, Pavement and City Feed, every worker needs a union to fight the bosses’ greed.”

The workers are preparing for their upcoming NLRB election to ensure that as many employees as possible who want to cast a vote are able to attend. More information on their organizing efforts, including the CFU Petition of Community Support, can be found at linktr.ee/cityfeedunite.