Despite threats of retaliation from officials in the Oakland Unified School District and the Port of Oakland, teachers and longshore workers went out on strike on April 29. They shut down public schools and the port for the entire day to protest school closures and the pending sale of Howard Terminal to the Oakland Athletics baseball team. Solidarity built the day’s actions and made them happen. 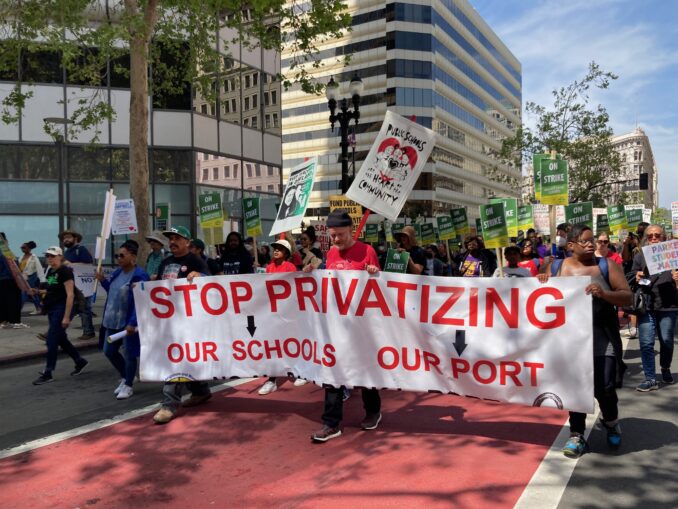 The state Public Employment Relations Board denied a last-minute request for an injunction sought by OUSD. So at 6:30 a.m. April 29, picket lines were set up at every Oakland public school. This reporter joined the picketers at United for Success Academy, where not one student came to school or crossed the line.

Teachers at other schools reported similar experiences. Sibling unions representing custodians and office staff told their members that they would not face retaliation for engaging in a sympathy strike.

After taking a membership vote, the Oakland Education Association called the one-day strike to support its Unfair Labor Practices claim against OUSD for ordering the closure of up to 11 schools over the next two years without soliciting community or labor input. Many family members of students and community supporters walked the picket line in the morning at two of the schools slated for closure, La Escuelita Middle School and Parker Elementary School.

Schools and labor vs. privatization

Tireless organizing by a new coalition, Schools and Labor Against Privatization (SLAP), provided the momentum for the one-day strike and the other actions on that day, organized by International Longshore and Warehouse Union (ILWU) Local 10, the OEA, Service Employees Union Local 1021, Oakland students, parents and community organizations.

After the morning picket, OEA called for a family friendly “block party” at the Lake Merritt Amphitheater. There, people made signs, listened to music, ate lunch and prepared for the rest of the day. At 1 p.m., SLAP members and OEA teachers led the group to Oscar Grant Plaza for a community rally, which was joined by ILWU members after their May Day union meeting in San Francisco.

Hundreds of people filled the plaza in front of City Hall. As marchers entered the plaza, they were greeted by chants by Demi, an Oakland elementary school student and daughter of Misty Cross, an activist with Moms for Housing.

Speakers included Moses Omolade, an education worker from Westlake Middle School, who went on a hunger strike when the school closures were first announced. Parents of students impacted by the closures and cuts in services addressed the rally. These included Max Orozco, whose child attends La Escuelita, and Kristina Molina, a mother of children with special needs. Isaac Murillo, an eighth grade student from La Escuelita also spoke.

‘Public resources for people, not billionaires’

Trent Willis, past president of ILWU Local 10, spoke on behalf of his local and Longshore and Warehouse workers in Locals 6 and 34. He told of the united fight of the teachers and the longshore workers against the gentrifiers like John Fisher, the owner of the Oakland Athletics, and the charter school companies. Willis told the crowd that we are here to fight for the public resources. He stressed: “Public resources are meant for the public, not for the billionaires!”

OEA President Keith Brown stated: “When we fight, we win!” He talked about the struggle of the teachers and the Oakland community against the racist closure of schools in Oakland’s Black and Brown communities.

The crowd then marched down Broadway to the empty offices of the OUSD. Since the beginning of the pandemic, its staff has been working virtually. The school district’s building has been empty for two years, while the monthly rental fee is $250,000. Yet the school district claims it has no money!

A unified march of longshore workers including the ILWU Local 10 Drill Team, OEA teachers and residents of Oakland occupied the street in front of the school district’s building and continued their rally. A local community artist facilitated the painting of a mural, on which was written: “Save the schools! Save the port!”

Then, at 4 p.m., hundreds of teachers, parents, and community supporters headed to the Middle Harbor, Shoreline Park in the Port of Oakland to shut down the second shift of longshore workers. This was a strong act of solidarity after a long day of picketing and marching. ILWU contracts contain language supporting their members against crossing picket lines.

‘Oakland is not for sale!’

Members of the Arab Resource and Organizing Center and the Palestinian Youth Movement and Filipino activists from Gabriela stepped forward to lead picket lines at five gates at the port. Striking teachers led chants and kept the lines going. The purpose of this final act was to send a strong message to the forces of gentrification and privatization that “Oakland is not for sale!” At 7:45 p.m., the port arbitrators officially shut down the second shift.

This unified one-day strike was a first for the Oakland community and it was certainly not the last. The community will continue to fight against both the school closures and the gentrification of the Port of Oakland.

The writer is a proud member of the Oakland Education Association and a union representative for the Oakland substitute teachers.