It quickly turned into a celebration with TikTok dancing when dozens of Starbucks workers, unionized baristas from Pavement Café and Darwin’s Café, and supporters from labor and socialist organizations gathered to watch the vote count for the first two Boston area Starbucks stores to file for union representation. Ballots marked “yes,” shown by National Labor Relations Board staffers on a Zoom screen, added up to a unanimous landslide for Greater Boston Starbucks Workers United at the Coolidge Corner and Alston stores April 11. So far 16 stores have filed. 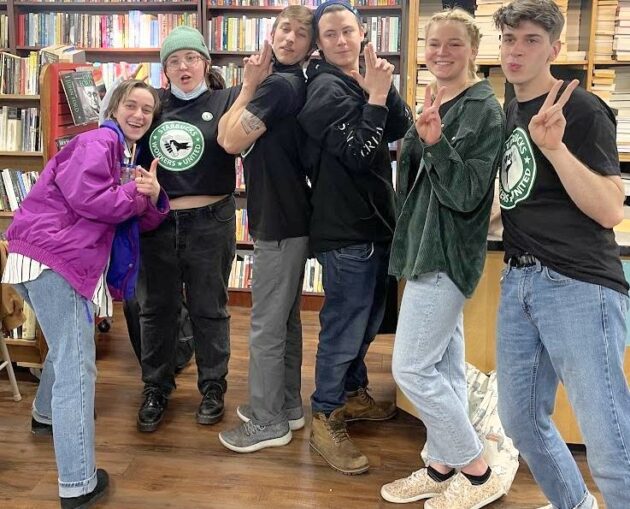 Maria Suevo, an artist and Coolidge Corner barista, opened the victory press conference addressing “the working class in this country at all corporations like Starbucks.”

“My biggest take-away from this experience,” said Suevo, “is that literally every store can do this. McDonalds workers, if you’re out there, you can do this!  Wendy’s, I’m looking at you. You can unionize!  If we can get through the union busting, you can, too!”

The Boston victory came seven days after billionaire Starbucks CEO Howard Schultz declared that “corporations are under assault by unions” and the same day Schultz posted a “help wanted” ad for a labor lawyer “experienced in strike contingency planning.”

“Understand this, Howard Schultz,” declared Tyler Daguerre, a lead organizer at the Coolidge Corner shop. “Workers don’t want NFTs. They want you to sign the fair elections principles, and they would like you to stop union busting.”  Daguerre was responding to Schultz’s ridiculous suggestion that workers should be satisfied with a bit of a digital picture investment scheme instead of a union contract. 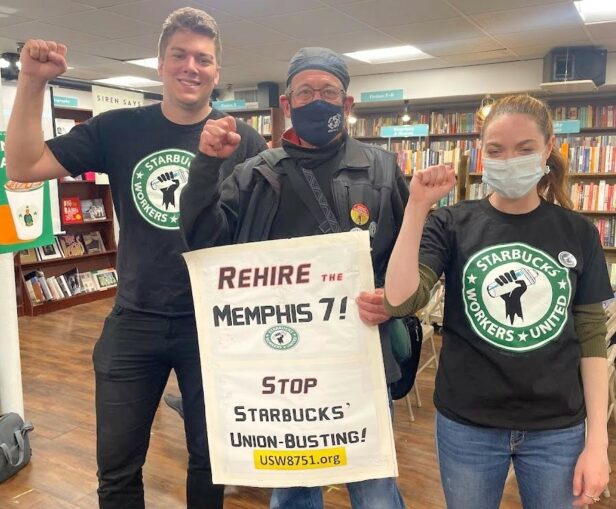 “This victory is all of ours collectively — not just our stores, but our community and every worker here and around the world,” Daguerre continued.  “This is a sign that we’re not going to take corporate greed. This is us standing up and fighting back.”

What has stunned the likes of Schultz, and sparked a new generation of union militants, who’ve now captured the attention of established unionists, is the rank-and-file organizing tactics, resourcefulness, and class conscious leadership of the young, multinational, multi-gender organizers at Starbucks and Amazon.

This worker-to-worker approach is spreading like prairie fire. At Boston’s vote count were barista leaders Casey Moore and Brian Murray, who traveled overnight from Buffalo, New York. Moore and Murray were among baristas who initiated organizing efforts in Buffalo last summer that led to the first union Starbucks stores in the U.S on Dec. 6, 2021.

These Buffalo leaders, with new leaders stepping forward in cities and towns faster than reporters can track, form the core staff of Starbucks Workers United. Their love, solidarity, optimism and “not gonna take it anymore” attitude – borne of their formative participation in the Black Lives Matter movement under pandemic precariousness – are this new labor movement’s main assets.

With advanced communications and technical skills, artistic merchandise and logos, and coordination through traveling and social media, organizers are reviving and sharpening rank-and-file organizing methods employed by socialists in the steel mills of Buffalo nearly a century ago. At the Boston vote count, some of these young organizers were discussing the old pamphlet “Unionizing Steel” by William Z. Foster [Workers Library Publishers, New York, August 1936], citing it as a source of their own “deep organizing.”

On March 3, Boston coffee shop organizers met in the same unionized bookstore to form a new city-wide coalition of coffee workers who use the hashtag #coffeeworkersolidarity.  Emboldened by the joint May Day 2022 “Call to Action” by Starbucks Workers United and Amazon Labor Union, organizers from Starbucks, Pavement Café, Darwin’s LTD, City Feed and other local shops and supporters have put out a call for a mass May Day rally and march beginning at Cambridge Commons at 3:00 p.m. Sunday, May 1.

A powerful new labor movement is brewing to fight and win against Wall Street Goliaths, whose union-busting attacks are intended to deepen class exploitation.

Steve Gillis is a member of the executive board of United Steelworkers Local 8751, the Boston school bus drivers’ union.