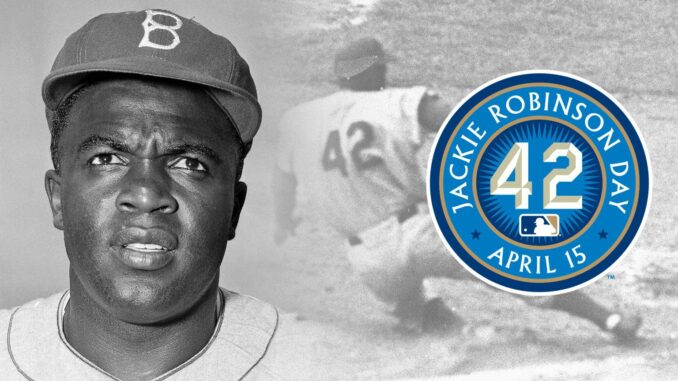 This year marks the 75th anniversary of the great baseball Hall of Famer, Jackie Robinson, who broke the color barrier of segregated all-white Major League Baseball on April 15, 1947. This coming October also marks the 50th anniversary of Robinson’s death due to a heart attack, with complications from diabetes, at the age of 53.  That lethal combination of diseases is not uncommon for African American men to suffer in disproportionate numbers even today.

Robinson’s number 42 was retired from all teams in the MLB on April 15, 1997.  Since 2004, all National and American League teams have worn number 42 jerseys April 15 on “Jackie Robinson Day” in recognition of his historic rookie debut with the then Brooklyn Dodgers.

Robinson, like so many other great Black baseball players, played in the Negro Leagues prior to 1947. As soon as Robinson stepped foot on the Dodgers’ Ebbets Field, he had to endure incredible racist taunts and epithets from white players, including some of his teammates, and fans.  His family did not escape this horrific trauma when Robinson received letters with death threats at his home. 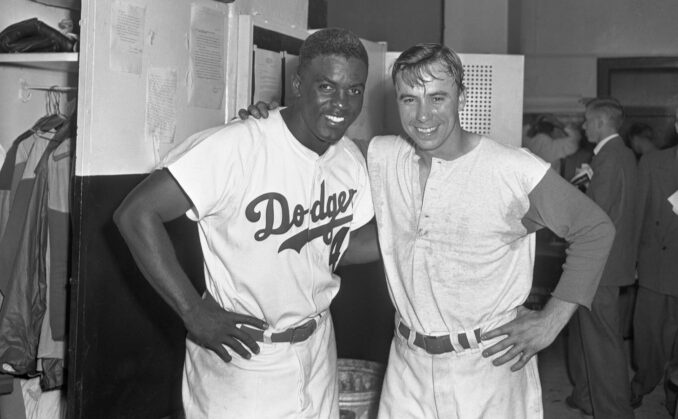 The white Dodgers shortstop, Pee Wee Reese, temporarily left his position during a game in Cincinnati in 1948 to put his arm around Robinson’s neck. This modest show of solidarity was viewed as a revolutionary act at the time. It silenced the fans who were taunting Robinson then, as was happening at so many away and home games.

One reporter who recorded Reese’s gesture was Lester Rodney, a reporter for the Communist newspaper, the Daily Worker, one of the few newspapers that consistently covered Robinson’s rookie year.

Today MLB is composed of fewer than 8% African American players and has only two Black general managers out of 30 – Dusty Baker with the Houston Astros and Dave Roberts with the Los Angeles Dodgers. Robinson lamented the fact that baseball owners were reluctant to hire Black managers, saying: “I am not convinced that baseball is ready to allow Negro players or ex-players to enter the executive suite. In fact, I feel that there is as much resistance on the part of the top brass of baseball to the idea of letting Negroes get to the top as there was in the early forties to allow Negroes to play.”

He added that “baseball owners are willing to “exploit the talent of Negro and other colored players, but after their playing careers are over, they have nowhere to go. Because the owners don’t have the courage or decency to think in terms of the contributions these players have made to their fortunes, they just let them go.” (Washington Post, April 14)

More than a baseball player

Never known as a radical, Robinson nevertheless became a national hero on and off the field because he changed the “color” of baseball – still known as “America’s pastime” and the most popular sport in the U.S. in his day.  Even before becoming famous, he opposed racial segregation whenever and wherever he could.  For instance, while living in Pasadena, California, in 1938, Robinson was arrested for defending a friend who was unlawfully detained by police. When he joined the segregated U.S. army during World War II, he was arrested for refusing to sit in the back of a military bus.

He became a prominent civil rights figure before the Civil Rights Movement gained prominence in the early 1950s, including when segregated schools were legally outlawed by the U.S. Supreme Court in 1954.

After playing 10 years in the MLB, Robinson was forced to retire prematurely due to diabetes. He then marched alongside Dr. Martin Luther King, Jr., during the 1963 March on Washington for Jobs and Justice.

Robinson’s legacy is that he fought for racial equality not only inside baseball but also throughout society until the day he died.