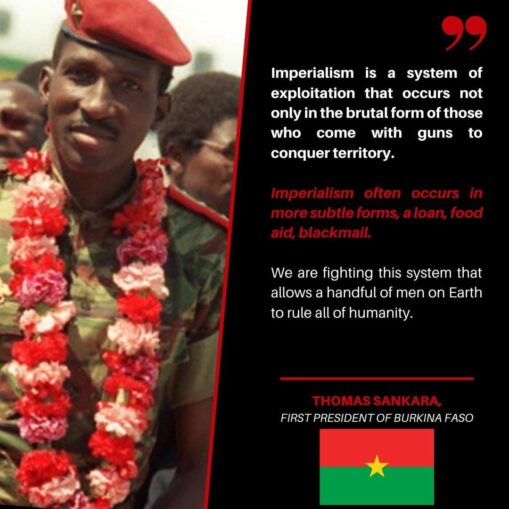 The trial of the Burkinabè soldiers who in 1987 killed Thomas Sankara, the president of Burkina Faso, and some of his closest advisors ended April 6 with a guilty verdict and life sentences. The role in the assassinations that was played by French imperialism and its agents in the neighboring Ivory Coast is still unclear.

Sankara was a conscious revolutionary. His political views and organizational steps as president were modeled on those of socialist Cuba.  (See Workers World,  Nov. tinyurl.com/2z68hpva)

Alouna Traoré, who was Sankara’s legal counselor in 1987, left the court smiling this time, 35 years later. He had somehow survived the deadly attack on Sankara and twelve of his advisors, according to an Aug. 4, 2015, interview with Le Pays, a daily newspaper in Ouagadougou, Burkina Faso’s capital.

This week Traoré told German media giant Deutsche Welle, which covered the trial, “They attacked our dream thinking they could kill him. Thirty-five years later, I realize that the Burkinabè dream holds water. This excites the whole continent, the lines are moving.

“Thomas [Sankara] has done useful work, his example is being followed,” Traore added. “Our joy is that young people, future generations, use it for better fights, so that we can turn these so-called territories of misery and precariousness into territories of happiness and well-being.”

Images of Sankara pop up all over West Africa – on cars, t-shirts, scooters – particularly on t-shirts in demonstrations. His modesty, lack of ostentation and humility, his defense of women’s rights and education, his concern over Burkinabès having enough to eat and a healthy lifestyle, even though he was only president for four years, has kept his memory alive. This legacy has supported the progressive movement in Burkina Faso and his family over the decades as they pushed for a trial.

The large statue of Sankara outside the building where he was killed is a major tourist attraction in Ouagadougou.

Sankara actively encouraged countries in Africa, particularly countries that were former colonies of French imperialism, to stop paying the foreign debt, which was forced on them by their former colonial overlords.

Nearly half the countries in Africa were French colonies or protectorates and France still dominates their economies, maintains military bases and conducts military operations against a variety of  groups. The fall of Muammar Gaddafi in 2011 produced a flood of weapons as the West Africans who fought in his army made their way home with their weapons.

Although the United States competes with France for domination of the region, it  provides extensive help to the French military in West Africa. This can be logistical aid, intelligence sharing from the big drone base in Niger up to rapidly deploying forces.

There are armed insurgencies throughout the Sahel – a band of semi-arid land south of the Sahara and north of the Savanna that stretches across Africa and includes Burkina Faso.  There was a major attack on an army base in northern Burkina Faso the first week of April during which 16 soldiers lost their lives.

Throughout the Sahel, there have been sharp signs that show an increase in mass pressure against the French presence.  In Senegal, French stores and gas stations have been broken into; in Burkina Faso, tailors cut up French flags to sew into Russian flags; in Mali, French advisors and military technicians are no longer welcome, and have been replaced by Russian professional soldiers from the Wagner Group based in St. Petersburg.

In Niger, a French military convoy shot at protesters trying to block it, killing two protesters.  This protest raises questions about France’s ability to supply its forces.

More general questions remain in the background: Will French imperialism be able to maintain its presence in Africa and how will this impact the U.S. role?