Emmanuel Macron, from the party En Marche, whose job history as a banker primed him for his current role as a bankers’ president, came in first in France’s presidential vote held April 10 with 27.4%. Macron is a supporter of the European Union, which is basically the organ of the European banks.

The far right-wing candidate Marine Le Pen, representing the Rassemblement National, in her third run for president, came in second with 24.1% of the votes cast.

Jean-Luc Mélenchon, of the anti-capitalist, working-class party France Insoumise, came in a close third behind Le Pen with 21.5% of the vote.

Presidents in France are elected by direct popular vote, generally in two rounds. In the first round, candidates from a variety of parties compete. The two top vote-getters in the first round compete in the second and the winner in this round becomes president with extensive powers.

Since this way of selecting presidents went into effect in 1965, there have been two rounds of voting. There is no early voting or voting by mail.

Le Pen’s RN is a party which wants to change the French constitution so it can legally discriminate against people whose national identity is not French – like the millions of people living in France whose ancestors came from Africa or the Middle East. RN demands a total ban on the public display of Islamic symbols. Le Pen is for complete prohibition of abortion and for allowing discrimination against women.

Le Pen has waffled on Ukraine, not really opposing NATO expansion, but at the same time advocating for France to leave NATO. She responds to questions about Ukraine by opposing attacks on the French standard of living caused by the war and sanctions, yet also says she has no use for unions – which defend the living standards of workers. 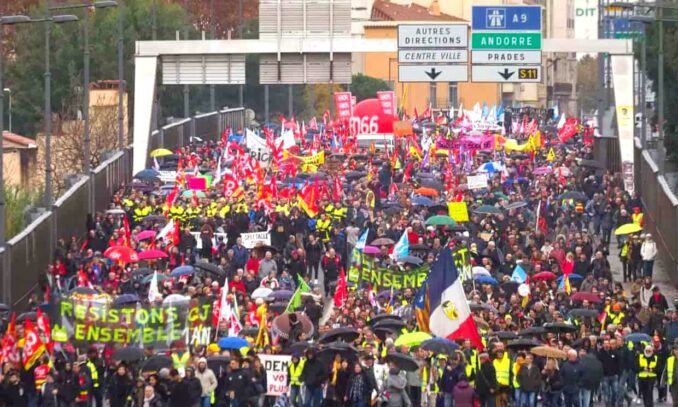 There were six left-wing parties running in this election. At the beginning of March, Mélenchon’s FI had a 13% approval rating. When the war in Ukraine started, two of the alleged left-wing parties, the Greens and the Socialist Party, each with a substantial approval percentage, immediately backed NATO’s role and pushed for France to take strong measures to support Ukraine.

FI, in contrast, demanded an immediate cease-fire and a Europe-wide security conference. Mélenchon opposed the economic sanctions against Russia and opposed sending arms to the Zelensky government. He also demanded that France withdraw from NATO. These positions are shared by the French Communist Party. (France TV Info, March 9.)

FI has the reputation as a struggle party, a party that gets things done and is open to the youth. It militantly fights for jobs and one of its well-known militants, François Ruffin, helped found the Nuits Debout movement and led a struggle to get jobs back that was the basis for the hit film “Merci, patron!” or “Thanks, boss!” (Available on Netflix France)

This reputation and the desire of progressives in France to cast a “useful vote” in the first round led to a strong swing of support for FI, as it was the only left party that had a chance of making the second round.

France is the seventh largest economy in the world. It has an aircraft carrier, nuclear weapons, and military bases in a number of African countries and the Caribbean. Islam is the religion in France with the largest number of practising members.

Since members of the French parliament run in single-seat districts, it is easier for a small party, either from the left or right, to win a seat. The same two-round system is used.

France is a country of demonstrations, where everyone from workers and students to lawyers, doctors and judges, take to the streets.

Sometimes it is a mass movement like the Yellow Vests that hits the streets all over France in protests against increasing taxes, higher rents and police violence. The CGT, a militant and very progressive labor union currently led by a Spanish immigrant, has led millions of workers and youth out into the streets, to protest changes to the labor code and retirement programs.

The French working class faces a big challenge: Le Pen winning would be a big step towards fascism and would disrupt solidarity among workers from diverse ethnic or religious backgrounds.

With no left candidate in the run-off election April 24, progressives have to mobilize against Le Pen while still giving no support to nor showing confidence in Macron. The main resistance will have to be in the streets.