by Workers Assembly Against Racism

The news release below was issued April 9 by Workers Assembly Against Racism to announce a demonstration outside the luxury penthouse of Starbucks CEO Howard Schultz to protest Starbucks’ union busting. The action will take place Thursday, April 14, 6:00 PM 155 West 11th Street, between 6th and 7th Avenues in New York City, and is demanding Starbucks rehire the Memphis 7 and other workers fired for union organizing. 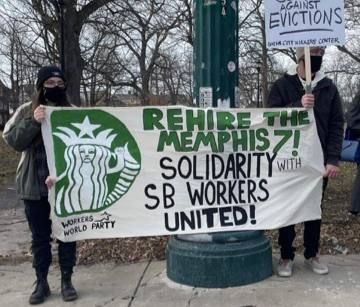 The Manhattan luxury penthouse of Starbucks CEO Howard Schultz – who claimed last week that the rich are being “assaulted” by the “threat of unionization” while he fires union organizers left and right – will be the site of a protest this week at 6:00 p.m. Thursday, April 14, at 155 West 11th Street, in New York City.

The protest will be held by the May Day 2022 Organizing Committee, a coalition of groups including the Laundry Workers Center, Coalition of Black Trade Unionists NYC, Coalition of Labor Union Women, Teamsters Local 808, and Workers Assembly Against Racism.

“Starbucks CEO Schultz just publicly claimed his stores were being ‘assaulted’ by the ‘threat of unionization,’” said Joan Hwang, an activist with Workers Assembly Against Racism. “From the Memphis 7 to Phoenix’s Laila Dalton, reality shows it is his workers who are being assaulted by union-busting threats, coercion and intimidation.”

“Such threats aren’t deterring workers from organizing,” Hwang continued. “Sixteen Starbucks stores have voted to unionize. Amazon just won a union election in Staten Island. Workers are waking up, fighting back and winning – but they continue to need solidarity to hold out against these huge transnational corporations.”