What will it take to stop the war against Black and Brown communities?

The 24/7 U.S. media coverage of the war in Ukraine means not much else makes the news. So when Minneapolis prosecutors announced April 6 that they would not bring charges against SWAT officer Mark Hanneman, who shot and killed 22-year-old Amir Locke while delivering a no-knock warrant in the early hours of Feb. 2, this glaring injustice received scant media coverage. 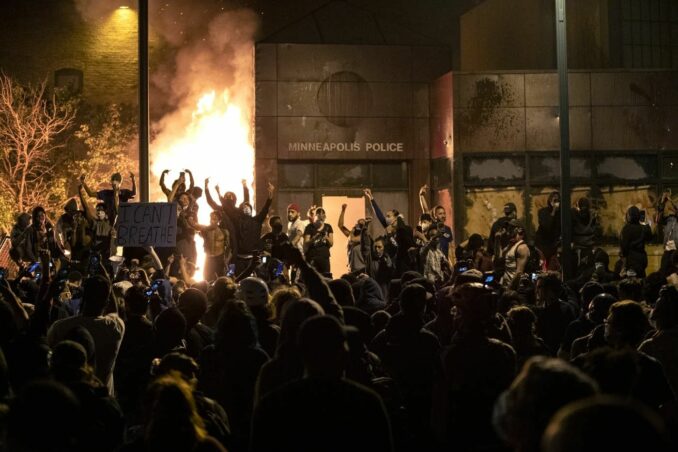 Outrage over police lynching of George Floyd. The Minneapolis police station was burned to the ground May 28, 2020.

Locke, a young Black man, had a license for the gun he held for self-protection, but was given no chance to survive his encounter with Minneapolis police. Hanneman shot and killed Locke nine seconds after entering the apartment with a warrant naming someone else.

Another police officer gets away with murder in the ongoing war against Black and Brown people in the United States. The roots of this war can be traced back to white supremacist policies stemming from enslavement and leading up to the present day.

It is important to put this latest decision involving a murder by Minneapolis police officers in context. This is the same city where in 2020, another Black man, George Floyd was murdered by white police officer Derek Chauvin, who pressed his knee against Floyd’s neck for over 9 minutes, suffocating him.

Historic, massive demonstrations that brought millions of protesters into the streets exploded following Floyd’s killing. In April 2021 Chauvin was convicted in Floyd’s murder. But apparently Chauvin’s conviction was not a deterrent to police brutality.

The massive, global Black Lives Matter protests following Floyd’s lynching raised demands including “Defund the Police” and “Abolish the Police.” In November 2020, Minneapolis Mayor Jacob Frey declared a moratorium against no-knock warrants, yet these continue, averaging around 139 per year in that city.

Across the U.S., politicians promised to deliver policing reforms. Nearly 20 cities either cut funding for police or decreased the number of officers following the summer mass upsurge in 2020. Yet these “reforms” were a drop in the bucket and pledges to make real change were empty promises, designed to deflate the movement.

Under outgoing Mayor Bill de Blasio, in 2021 the New York City Council cut around $1 billion from their $6 billion police budget and voted to use the funds for programs to benefit community youth. One year later, fiscal year 2022, the police budget increased by $400 million, and plans for a new police precinct for southeast Queens replaced plans for a promised community center. In Washington, D.C., after cutting the police budget two years earlier, Mayor Muriel Bowser recently announced plans to re-fund and expand police ranks by 4000 over the next ten years.

While calling for “police reform” during the 2020 election, the Biden-Harris campaign made it clear that if elected, they would not defund police, they would increase funding – precisely what Biden called for in his March 1 State of the Union address. He stated “We should all agree: The answer is not to defund the police. The answer is to fund the police.”

In the same budget – which proposed increasing Pentagon spending by 10% against the background of the U.S./NATO-instigated war in Ukraine – Biden called for at least $30 billion in new police funding. Yet his administration failed to win passage of the George Floyd Justice in Policing Act of 2021 – legislation aimed at combating police misconduct, excessive force and racial bias in policing.

Letting police continually get away with the murders of Black people like Locke raises the question: Do Black Lives Matter?  For police, the response continues to be a resounding: “No.”

Where does that leave the progressive movement?

A major takeaway lesson from the historic 2020 demonstrations is that oppressed communities and their allies cannot rely on their oppressors to legislate the changes that will liberate them. To fight against the war on Black and Brown communities, our united demand must be “Abolish the police!”