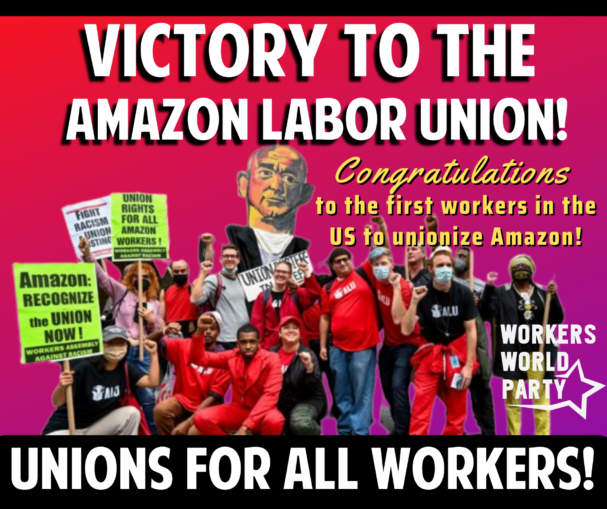 Amazon Labor Union scored an historic victory April 1, becoming the first union at an Amazon facility in the U.S. From March 25 to March 30, all nonmanagement workers at the Staten Island, New York, Amazon warehouse, known as JFK8, had the opportunity to vote on whether to be represented by the ALU. The final totals, certified by the National Labor Relations Board, were 2,654 yes votes to 2,131 no votes, with 67 challenged ballots. Over half of the 8,325 eligible employees participated in the vote. A simple majority was needed to win.

The union campaign began in April 2021, when Amazon failed to address workers’ concerns over the lack of COVID-19 safety precautions. The Staten Island warehouse is a major distribution hub for Amazon’s massive network of delivery stations and fulfillment and sortation centers.

At a rally in Brooklyn in October 2021, ALU president Chris Smalls explained what the union hopes to achieve: “ALU has put together a list of demands which we have full intentions to fight for as a bonafide union. We intend to fight for higher wages, job security, safer working conditions, more paid time off, better medical leave options and longer breaks. We also want to fight to bring back monthly VCP [variable compensation pay] bonuses for attendance and productivity and for becoming shareholders again upon employment with the company on Day 1. Both ended in 2018.”

Smalls emphasized, “This is truly a remarkable historical moment for all Amazon workers all over the country. ALU has already broken barriers and will continue to do so, but we’re not getting complacent. We now need the support of the communities more than ever, as our fight is just getting started.” (Workers.org, Oct. 23, 2021)