A rowdy crowd rallied March 26 outside a Starbucks store in Portland, Oregon, where workers are trying to unionize. Workers from a number of other unions spoke in support of the Starbucks workers; they included representatives of Oregon Coalition of Black Trade Unionists and mechanics at Jim Fisher Volvo, who are working toward an election to be represented by the International Association of Machinists (IAM). The mechanics held their own rally earlier that day. 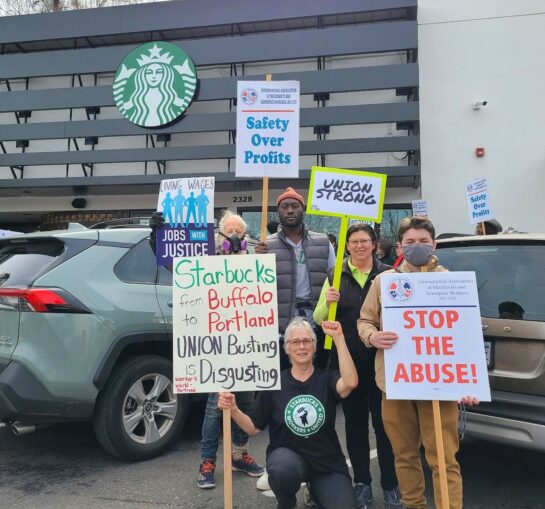 Pam Gordon of the Oregon Nurses Association drove 90 minutes to join the demonstration. She told the crowd, “I didn’t know I was a victim of wage theft until I became aware of the power of unions.”

Starbucks stores in Seattle and Mesa, Arizona, are the seventh and eighth locations across the country to win union representation elections. On March 22, workers at Seattle’s Capitol Hill Starbucks store voted unanimously to join Workers United. Two days later, workers at a Mesa store voted 11 to 3 to unionize, making theirs the second unionized store in that city. A barista at the Mesa location, Bradley Logue said, “This is our opportunity to speak up and have a voice for ourselves. We’re doing this not only for us, but for future generations, too.” (tinyurl.com/3kdtsr7k)

There are at least 157 Starbucks locations in 27 states engaged in unionizing efforts, making it almost certain more workers will join the union. (tinyurl.com/muuan6es) In Portland, there are now eight Starbucks stores trying to unionize, and in Seattle nearly half a dozen. Workers at the Cooper Point Village Starbucks store in Olympia, Washington, walked out March 24, demanding, “Fair contract; Don’t cut our hours; Stop Union Busting.”