“They banned books. We made history!” This was the cry of the founder of the Librotraficante Movement — writer, activist and professor Tony Diaz on March 12. 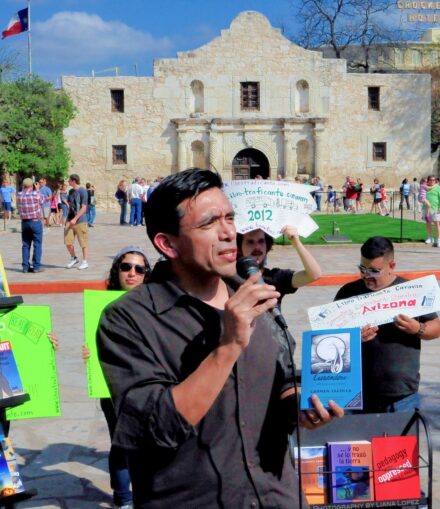 During the 2012 Librotraficante caravan,Tony Diaz speaks in front of The Alamo in San Antonio.

The Librotraficantes and supporters filled Casa Ramirez folk art shop to overflow capacity to celebrate the 10th anniversary of a 2012 caravan that took books banned from the Mexican American Studies (MAS) programs in the Tucson Unified School District back into Arizona.

The original organizers of Librotraficante — along with Diaz — were Liana Lopez, Bryan Parras and Lupe Mendez. Starting in 1998, they moderated a radio show on Houston’s Pacifica KPFT radio station called “Nuestra Palabra: Latino Writers Having Their Say.” When the group learned in early 2012 about the attack on MAS and the book banning in Arizona public schools, they went into action.

They decided to form a group of “book smugglers,” Librotraficantes, and smuggle what they called “wet books” across the border into Arizona — their resistant twist on a racist term for Mexican migrants. A big bus was rented, money and books were collected, and the caravan began.

Along the way, thousands of additional books were donated from around the country, allowing communities to open four “underground” libraries that seemed to unleash a renewed interest in La Raza literary legacy.

The caravan had book readings and rallies and press conferences in every city where it stopped. Caravanistas spoke to students of all ages, from young children to high school and college students.

As activist professor Diaz said, “Tucson school district decided to ban Mexican American Studies classes and proceeded to remove all the books out of every classroom, even in front of the students.They banned our history. We decided to make more.”

The banned titles included staples of Chicano and Mexican American Studies: “Re-Thinking Columbus: The Next 500 Years,” “Occupied America: A History of Chicanos,” and “500 Years of Chicano History in Pictures.”

The founders of the MAS program in Tucson and some of their students filed a lawsuit against the ban. When the case finally finished winding through the courts in 2017, Mexican American Studies won! The court ruled the ban was racist, decided that MAS improved the grades of all students involved and ordered MAS be reinstated.

This writer was part of the original 2012 Librotraficante caravan. Along the way to Tucson, we were met and hosted by many organizations. Two famous Chicano authors stand out. They were Denise Chavez and Rudolfo Anaya (author of “Bless Me, Ultima,” one of New Mexico’s most treasured literary works). Chavez welcomed us into her home and bookstore in Las Mesillas, New Mexico, and served us a huge and delicious breakfast spread. Anaya, considered the godfather of Chicano literature, fed us and talked with us for hours, Then a bottle of tequila was passed around. Eventually this icon gave us his blessing and a charge: Occupy Arizona!

How time flies! The original six-city caravan began with a send-off at Casa Ramirez. Ten years later we were again at Casa Ramirez to celebrate and to continue the struggle. We won a victory in Arizona then, but now there are threats of book banning from Texas to Florida and beyond.

At the anniversary celebration, Diaz asked everyone present to “join us as we launch the next chapter in the Librotraficante Movement. Just in time, as it seems like these book banners ain’t learned their lesson. Time to school ’em again.

“We are taking the Librotraficante Movement to the next level and touring all year long and into next year, the 25th anniversary of “Nuestra Palabra: Latino Writers Having Their Say.”

Texas Lieutenant Governor Dan Patrick is one of the targets of the Librotraficantes. Patrick has said that he will push for a change in state law that would end or revoke professorial tenure to teachers who he says “indoctrinate” students with ideas about critical race theory.

From MAS to African American studies to LGBTQ+ studies, this is the time to organize again: No banning of liberation literature or critical ethnic studies.

Patrick and all the other book banners around the country need to study the history and the power of a peoples’ movement like the Librotraficante Movement, because we have history and righteousness on our side. And we will win!