Bradford Gamble is holding a cell phone to his ear with one hand, his other elbow resting on the arm of his wheelchair. On the wall behind him, beside a mantelpiece with an electric fireplace, is a series of decorative wreaths arranged like letters to spell out the word “home.” He is sitting in the living room of his nephew Shaquan J. Jordan’s West Philadelphia house, a place Bradford just started calling home.

In 2021, Gamble was taken to the medical wing of State Correctional Institution Coal Township, where he had been imprisoned, and was told he was getting a routine colonoscopy. What he did not know was that medical staff at the prison performed a biopsy and extracted a length of his intestines. Their test confirmed that he had colon cancer. For eight months, no medical staff, no prison administrators — no one — relayed this diagnosis back to the patient, whose worsening abdominal pain and other unexplained symptoms were being treated with two Tylenol a day. 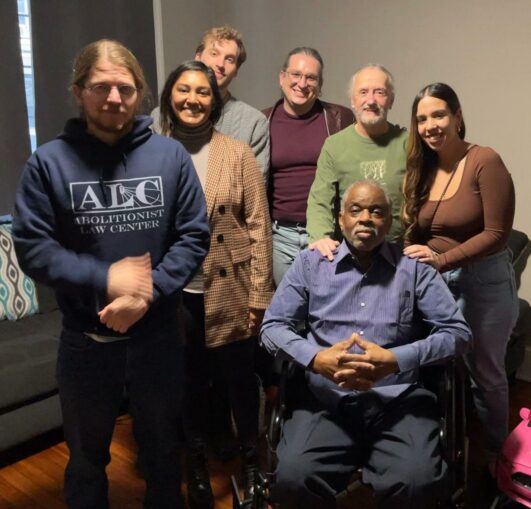 Bradford Gamble (seated) with prison abolition activists who worked for his release, March 13.

Finally, Gamble learned he had undergone a medical test without his knowledge or consent after a member of the medical staff casually inquired as to whether he got the results from his biopsy. He told this purported health care worker that he didn’t know anything about any biopsy. “Oh,” came the reply. “Well, it’s probably cancer.”

After months of Gamble filing numerous grievances with the prison administration and petitioning the prison medical staff with demands to see his own medical records, one day a guard walked past his cell and, without breaking stride, dropped a narrow piece of paper on the floor within reach. It was a medical slip with only a sentence or two printed on it, which confirmed the diagnosis of colorectal cancer, as well as the news that this prognosis was terminal as a result of metastasis. The cancer had spread to his lymph nodes.

In Pennsylvania, in order for an incarcerated person to even be considered for “compassionate release,” they must be too sick to walk and have proof from a medical doctor that they are going to die in less than a year. (The Morning Call, July 26, 2021)

The laws that determine whether a person can be freed from prison because of failing health vary from state to state, but a trend toward establishing procedures for this kind of “compassionate release” has emerged since the First Step Act was passed by Congress and signed by President Donald Trump in December 2018.

Even so, over 20,000 elderly and dying prisoners sent petitions for compassionate release between January 2020 and June 2021. Only 3,608 were granted. (U.S. Sentencing Commission) During that same 18 month period, 2,715 prisoners died as a direct result of the COVID-19, and an additional 400,000 prisoners contracted the virus and became seriously ill — including Bradford Gamble.  (The Marshall Project)

There are over 300,000 prisoners in the U.S. over the age of 50. (Bureau of Justice Statistics) A 2018 report, “The High Costs of Low Risk: The Crisis of America’s Prison Population,” says: “With an estimated 2.3 million people in confinement, one out of every 32 adults under correctional control or community supervision, and roughly one-third of all adults with some sort of criminal record, the U.S. surpasses all other countries in sheer numbers and per capita incarceration and criminalization rates.

“By 2030, the population of people aged 50 and older is projected to account for one-third of all incarcerated people in the U.S., amounting to a staggering 4,400% increase over a 50-year span.”

Gamble was only 20 years old when he was condemned to spend the rest of his life in prison. He’s now 66. No technology existed then that even resembled the mobile device he can now hold in his hand and hear the voice of Bryant Arroyo, an organizer, environmental activist and Workers World contributor.

At 50 years old, Arroyo himself has spent more than half his life behind bars for a crime he didn’t commit. But in addition to waging his own struggle for freedom and exoneration, Bryant fought a relentless battle to win compassionate release for Gamble, whom he calls “Bub.” After months of phone calls, letters, emails, petitions, legal dead ends, obstruction from prison officials, Gamble became one of only 17% of terminally ill prisoners in the country whose compassionate release petition was accepted. (U.S. Sentencing Commission)

“He was Godsent,” Gamble tells the half a dozen people who crowded on the couch in front of him after his release. They’re all abolitionist lawyers and activists assembled by Bryant and organized to advocate for Gamble’s release, including members of the Abolitionist Law Center, the Innocence Project and the Prisoners Solidarity Committee of Workers World Party. “I tell everybody that I talk to, family members, friends, when they ask me, ‘How did you get out?’ I say, ‘Bryant Arroyo.’”

‘We need help, it’s as simple as that’

“I didn’t make it out here just to say, oh, I’m home. Family, friends, it’s lovely. It’s beautiful. But I got more to do.” Bradford Gamble says health care workers in the U.S. need to understand how much rampant neglect and abuse that their purported colleagues are committing in prison medical facilities. And he believes they have an obligation to intervene on behalf of prisoners who are suffering and dying as a result of this ill treatment.

“And we need help; it’s as simple as that. We need help.

“You might say it’s not your problem. But if you had a loved one who was in the same position that I’m in, that I was in, and that people are in jails and prisons all over, you’d think different. So think different now. Don’t wait. Let us know that you love us, that you care about us.

“The word ‘care’ in your job description — health care — should mean a lot.

“We’re not ashamed of saying we’re begging for your help, because we need it. I’m out here now, but I never left the prison mentally, because a lot of the people I love are still there. And they need your help. Please help us.