The author is a Serbian composer living in the U.S. who actively opposed the U.S.-NATO war against Yugoslavia in 1999.

​​On March 24, 1999, NATO crossed its own redline, when it bombed Serbia and Montenegro, the last two republics still remaining at that time in a union of the South-Slavic peoples called Yugoslavia. The 78-day bombing campaign was a criminal act against a sovereign and truly independent nation, unprovoked and justified by lies and demonization of the country’s leader and its people. 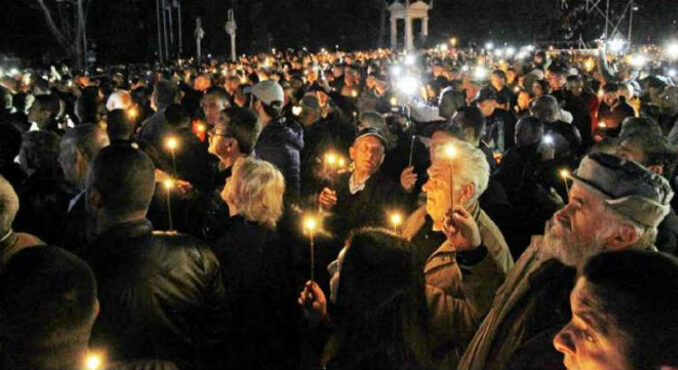 As a result of that war, NATO carved out of Serbia the province of Kosovo and Metohija, a territory that is still not recognized as an independent country by the U.N. Even some NATO countries won’t recognize it. It is an absolutely lawless territory today, dominated by criminal gangs and their masters based in the U.S. military’s Camp Bondsteel.

From a so-called defensive alliance, NATO has become the largest criminal enterprise on Earth. After Yugoslavia, NATO went on to destroy Afghanistan, Iraq, Libya and Syria; and now it is waging a proxy war, with the help of the corrupt Ukrainian right-wing elites, against Russia.

For years, the U.S. has bribed Ukrainian politicians with billions of dollars. A right-wing coup was orchestrated, the elected president removed and the new regime introduced blatantly discriminatory policies toward Russian-speaking citizens of Ukraine. The Ukrainian government’s war against the Russian-speaking population in the Donbass region started seven years ago; 14,000 people have been killed. The war started then, in 2014, not last week.

This massacre has to stop. The only way to achieve a permanent peace between the two neighborly peoples, Ukrainians and Russians, is to stop the U.S. and NATO in their frenzied drive to impose their domination in a unipolar world. The U.S. and NATO could stop the war with a single phone call to the Ukrainian president, with a demand to respect the already signed Minsk agreement of 2015.

The existence of NATO and its current proxy war against Russia is costing dearly. It’s the ordinary people around the world, including here in the U.S., who will suffer in the years to come from the cost of the wars and sanctions. People must organize to stop the military spending and demand their tax money goes to improve their own lives.

Disband NATO, money for free health care, education and housing! Russians are not the enemy, capitalism and militarism are.