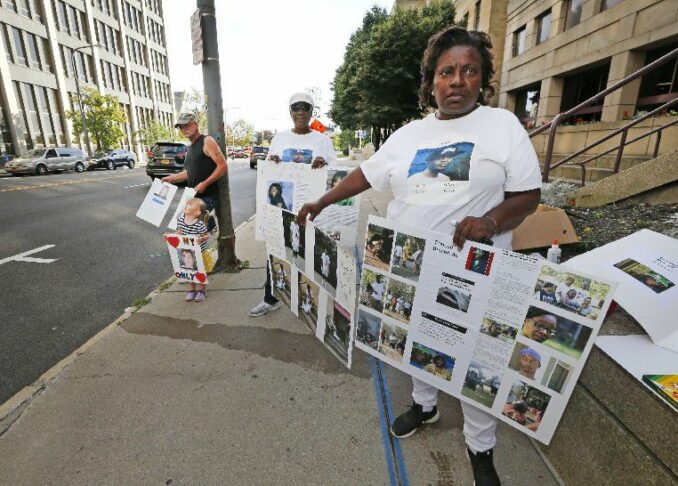 Since July 6, 2021, Eric Lynch has been held in the Erie County Holding Center (where 32 prisoners have died since 2005) with no charges against him, spending around half that time on suicide watch. His mother, Monica Lynch, has agitated tirelessly for his release. Lynch, a 24-year-old Black man with several developmental disabilities is a victim of the byzantine bureaucracy of the U.S. mental health care system and the inhumanity of its carceral system.

Caught between the court’s refusal to release him and New York State’s Office for People With Developmental Disabilities’ (OPWDD) incapacity to place him in an inpatient facility, Lynch’s situation can only be described as Kafkaesque.

Monica Lynch is rightfully worried that her son might die in the ECHC. Her brother, Connell Burrell, died at ECHC in 2019, after lapsing into a diabetic coma due to improper care. She believes strongly that jail is not the right setting for her son and that therapy and medication will do him far more good. As long as the judge refuses to reverse her previous order demanding that Eric Lynch be transferred to an inpatient facility — one that cannot take him — Eric will languish in an infamously inhumane holding center.

Monica Lynch, a veteran of the U.S. Marine Corps, developed cancer in her left arm as a result of exposure to unknown toxins in the first Gulf War, resulting in an almost complete loss of mobility in that arm. Looking for means of supplementing the meager stipends she received from Social Security Disability and Veterans Administration compensation, she became a foster parent.

Monica Lynch and her then-husband took in three boys, whom they later adopted: Tylon and identical twins Eric and Bernard. Eric and Bernard had developmental disabilities from birth; they were born prematurely with fetal alcohol syndrome, and they were later diagnosed with mild intellectual disability, intermittent explosive disorder and psychotic episodes.

The boys benefited from an upbringing enriched by a large extended family and participation in youth sports leagues — though occasionally getting in trouble in school, especially when high pupil-to-teacher ratios meant they couldn’t get the personalized attention that they needed. Ms. Lynch moved her sons from school to school, looking for somewhere that could provide the proper level of care, sometimes public, sometimes private, sometimes homeschooling.

Although the twins’ disciplinary issues at school were typically rather benign — clowning around in class, leaving their desks — two incidents would color their interactions with law enforcement in years to come. While in middle school at Buffalo Traditional, a private school, Bernard found a toy gun on the street and put it in his locker at school. The school, taking this to be an indication that he knew what he was doing was wrong and finding him in violation of their zero tolerance policy, wanted to suspend him from school for a year.

Ms. Lynch withdrew Eric and Bernard from this school and, after homeschooling for a year, placed them in Buffalo Public Schools’ Burgard Vocational High. Here, Eric one day purchased a nickel bag of weed from another student, who then took it back and ran off with it and Eric’s money. Eric, distraught at having been robbed, reported the incident to teachers, not considering that this could get him in trouble. Here again, the school judged that he must have had the capacity to know that what he did was wrong, citing his academic performance — despite their having his mental health record on file.

Rather than have Eric suspended from school for a year, Ms. Lynch opted to move the twins to a different school once again, this time to Baker Victory, another private school, with a program through the OPWDD. Eric and Bernard have been OPWDD clients ever since — though they have received no services from the office, other than a subsidy of their rent.

As Eric and Bernard entered adulthood, Ms. Lynch found herself unable to provide them the care they needed, and she rented them an apartment of their own and later a house formerly occupied by their brother Tylon. In both places they were taken advantage of and harassed by neighbors, with several items being stolen from their home and some people going out of their way to cause conflicts with the brothers.

An incident at a convenience store resulted in Eric being charged with menacing, because he had a razor blade in his pocket when he was arrested, and started a string of arrests for Eric over petty altercations — he would be arrested almost 30 times. Their occasional psychotic episodes at their mother’s house, yelling, damaging property, caused Monica Lynch to get orders of protection against her sons, having been told that creating a paper trail about their mental issues would help get them the treatment and services they needed.

Eric was jailed last July after twice being late for an appearance ticket to see a county forensic psychologist to judge his capacity. He has no charges against him and has never committed a violent crime; but the court has judged him a flight risk, because of an incident where he was released from an inpatient facility on his own recognizance after an altercation with another patient.

OPWDD holds that staffing issues make it impossible for them to take on Eric as an inpatient. Ms. Lynch wants Eric released from ECHC into an Assisted Outpatient Program through OPWDD and has been holding a weekly vigil at the ECHC.