The first casualty of war is truth. The famous ancient Greek playwright, Aeschylus, allegedly said this in 550 BCE. It’s been repeated often, but is no longer accurate.

U.S. imperialism, its spokespeople and media have murdered truth already, before the war starts.

The invective the Biden administration directed at the Russian government and its President Vladimir Putin has been so vicious that everyone should realize a new U.S. aggression in Eastern Europe, directed against Russia, is underway.

The Biden administration invented the story; the corporate media repeated it. Word for word. For months. Few even asked questions.

Not only right-wing media, but also “liberal” CNN, MSNBC, NPR and the New York Times have been running four to six stories a day taking different angles to tell One Big Lie: Putin is about to invade Ukraine. They even named dates for the invasion, now past due.

It got so intense that when these media exhausted lies with geopolitical themes, they spread the attack to the Winter Olympics. First they relentlessly bullied the brilliant 15-year-old Russian figure skater Kamila Valieva for allegedly “doping.” Then when she lost her event, they attacked her Russian coach, Eteri Tutberidze, for lack of empathy. The media wanted it both ways.

With all the attacks on Russia, the media almost ran out of space to attack China, which for months had been their main target. They still managed to criticize the Chinese government for keeping everyone healthy at the Olympics, despite COVID-19. And they attacked China and Russia for being friends.

One AP reporter, Matt Lee, did ask State Department spokesperson Ned Price on Feb. 3 to provide proof that Russia was carrying out some nefarious act that Price charged Russia with. Price chided Lee for daring to question the U.S. government. The only “proof” Price provided was a written transcript of his press briefing. 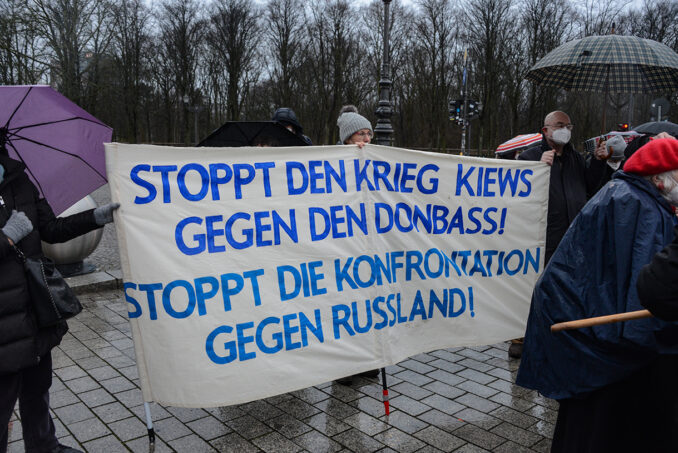 Whoever may still think the media should believe the U.S. imperialist government in a period of buildup toward war, Workers World would like to remind them:

Secretary of State Colin Powell swore to the United Nations in early 2003 that Iraq had weapons of mass destruction. He swore that U.S. intelligence agencies had proof. It was a lie, as Powell later admitted. That lie served as pretext for invasion, a decade-long occupation and the destruction of Iraq and its people.

In January 1999, U.S. officials in the town of Racak, Kosovo, in Serbia manipulated casualties of a battle between Kosovan terrorists and the Serbian Army and framed it as a “Serbian massacre” of civilians to agitate for war on Serbia. Within months NATO opened a 78-day NATO bombing campaign of Serbia and Montenegro and eventually destroyed the Yugoslav multinational state.

In August 1964, the Lyndon Johnson government faked an attack by North Vietnamese patrol boats on U.S. destroyers. It used this lie, later exposed, to provide a pretext for the U.S. Senate’s Bay of Tonkin Resolution. This allowed Johnson to escalate the war against Vietnam.

It might seem irrational for U.S. imperialism to provoke a war with Russia — the Pentagon recently lost a 20-year war with the Taliban — but the intense media demonization of Russia greases a path to war. Truth is the first casualty of the war drive.

Don’t trust any of the charges out of Washington.

Stop the U.S.-NATO war against Russia over Ukraine.