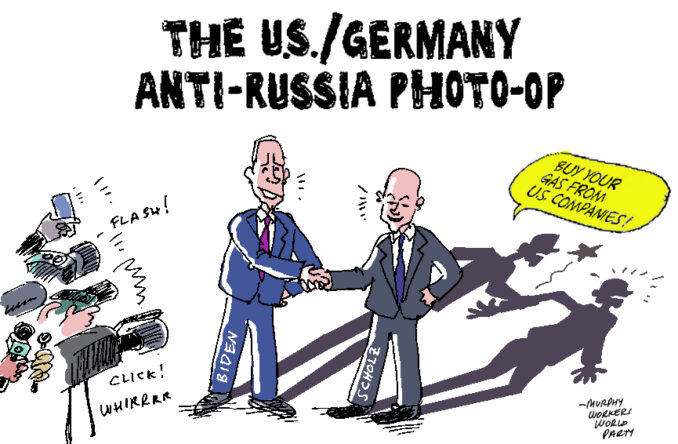 The author is a Venezuelan international relations expert, who was previously Director of the International Relations of the Presidency of the Bolivarian Republic of Venezuela, his country’s ambassador to Nicaragua and an advisor for international politics for TELESUR. Translation: United World International, edited by John Catalinotto.

Feb. 2 — It is almost natural that countries (especially the powers that have more capability of doing so) would like to resolve their internal problems by unleashing conflicts abroad. For that, they invent attacks on their national security, exploit false national interests and make absolutist calls for national unity in defense of the threatened sovereignty and integrity.

Who can doubt that the artificial conflict between Russia and Ukraine corresponds to this logic? Especially given the continual and accelerated failure of the administrations of Joe Biden in the United States and Boris Johnson in Great Britain. Biden’s popularity is one of the lowest of any U.S. president at the end of his first year in office.

According to an article published by the Los Angeles Times on Jan. 20, which cites an Associated Press — NORC Center for Public Affairs Research survey, only 43% approve of the U.S. president’s management. In addition, just 28% want Biden to run for reelection in 2024, including only 48% of Democrats. Regarding the economy the situation for Biden is worse, as scarcely 37% evaluate the president’s management positively. It should be noted that the 2021 inflation rate was the highest in 40 years.

Nor is the popular perception of his handling of the pandemic any better, rejected by 55% of Americans. In the same way, it is considered that the government has been totally inefficient in resolving the migration problem and has not even been able to carry out its spending plan in terms of infrastructure and improvement of the economy.

In general, people perceived Biden as being unable to build consensus with the Republicans — which was a great promise of his campaign — and he has not succeeded in convincing some of the more conservative legislators of his own Democratic Party to support his program. In this context, citizens wonder what is the point of reelecting Biden, whom they see as extending the crisis.

Boris Johnson’s situation is similar. Johnson is being questioned and debated in the midst of a deep political crisis, originating from the leak of an email in which the prime minister’s principal secretary, Martin Reynolds, invited government personnel to a party during full COVID-19 lockdown.

Thus the leader of the Labor Party, Keir Starmer, has called Johnson to resign, while polls show that 90% of Britons think he should step aside.

In this context, whoever has doubts about the true objectives involved in the development of the “Ukrainian crisis” should listen to Johnson, who, after a visit to that country, first apologized for having attended the aforementioned party and then appealed to jingoist sentiment, calling to “concentrate all efforts to confront Russia.” All this after the Scottish deputy Ian Blackford called on him to agree to be “investigated by the police for violating their own laws.” For her part, the deputy Angela Rayner, the Labor Party’s number two, said Johnson “had to go” immediately.

When another deputy accused him of “ruining the country’s reputation, Johnson responded by saying that: “Our country’s reputation in the world is based […] on the fact that we are able to unite allies to oppose Vladimir Putin. This is what the world is focused on right now and what I’m focused on right now,” making it clear what the real goal of his “Ukrainian affair” is.

Likewise, by clearly establishing who would die in a possible war between Russia and Ukraine, Johnson stated that: “The best we can do is inform the Russian citizens that the Ukrainians will fight to the last drop of blood.” Simply put, Johnson decided that Ukrainians must die to save him and Biden from a political debacle.

Some unwary reader might think that what I am writing about the situation on the Russian-Ukrainian border is speculation. That reader should read what the Ukrainian authorities say, those in charge of reporting what is actually happening there. Last Friday, Jan. 28, the president of Ukraine, Vladimir Zelensky, warned that the impression is being created in the West that war with Russia is imminent. Ruling out that this will happen, Zelensky lamented at the same time because the terror created around the alleged war is hurting the national economy.

The Ukrainian president asked, “Are there tanks in the streets?” He himself replied that this was not the case, but that such was the impression that had been created in countries such as the “United Kingdom, Germany, France and Lithuania,” where the media transmitted complete false news about the mobilization of the armed forces and the militarization of the cities.

Nevertheless, a situation of horror is being generated that is causing serious economic damage to the country from what he called a manifestation of frenzy, forcing him to talk with leaders of other countries to clarify that Ukraine is in need of stabilizing its economy, while what they’re doing is spreading news that indicates the opposite.

In a clear but veiled allusion to Biden and Johnson, Zelensky pointed out that: “signs are coming from respected leaders of states who openly, not even in diplomatic language, say that ‘there will be a war tomorrow.’” He pointed out that this produces panic in society, in the markets and the financial sector, stating that a very large sum of money had fled the country in recent days, deploring that “the increase in tension conceived by the media has ‘a high cost’ for the country.”

After the specter of an urgent war was raised in November, which — according to the U.S. network CNN — was even announced by Biden to Zelensky (although denied by Washington and Kiev), more recently, on Jan. 26, the U.S. Undersecretary of State herself, Wendy Sherman put a date on the Russian invasion, when she pointed out: “Everything indicates that [Russian President Putin] “will use military force at some point, perhaps between now and mid-February.”

This statement unleashed the frenzy within the frenzy, as countries like the United States, Canada, Australia and Japan began to withdraw their diplomats from Kiev.

Zelensky commented that such a decision was a mistake, but with the rhetoric typical of subordinate countries, he hastened to clarify that: “I have no right to say that it is a mistake of the governments of respected countries. I think it’s a mistake for us, for Ukraine.”

On the other hand, this situation has continued to deepen inter-European contradictions. The leaders of the Old Continent will have to find arguments to explain to their citizens why, following orders from Washington, they force them to pay for the gas they consume, a price three or four times higher than what they would have to do if they obtained it from Russia.

Such reasoning begins to make an impression on some European leaders, whose rationality does not allow them to understand that they have to “buy” in Ukraine a conflict that they do not consider their own. In this regard, the German Foreign Minister, Annalena Baerbock, stated that NATO’s expansion to the east is not on the Alliance’s agenda.

Similarly, Baerbock reiterated that Ukraine’s inclusion in NATO “is not currently on the agenda,” adding that Ukrainians want to live in peace, so it is essential to return to discussions on the implementation of the Minsk agreements. Interestingly, in that question Germany’s position coincides with Russia’s.

That same day, Jan. 28, confirming the statements of President Zelensky, Ukraine’s Defense Minister Alexei Reznikov told the Parliament that there are no preparations for a Russian offensive against his country. He explained that “At the moment, there is no event or action of a military nature [by Moscow] that is noticeably different from what happened last spring.”

But what was Biden’s decision in this situation, in which one might expect tensions to ease and conditions for negotiation and dialogue to improve? The same day, without commenting on Zelensky’s statement or that of the Ukrainian defense minister, Biden announced that he was going to transfer more troops to Eastern Europe and the NATO countries in the short term.

In parallel, the United States convened a session of the U.N. Security Council which, according to the Russian representative before that entity, Vasili Nebenzia, does not contribute to the resolution of the conflict in Ukraine but rather harms it. Nebenzia said that the open format offered by the United States is a classic example of “megaphone diplomacy,” which does not solve anything and creates more noise by transmitting the wrong message of what is happening.

By the way, has anyone bothered to ask the Ukrainians what they think about joining NATO? The Ukrainian researcher Volodymyr Ishchenko, associated with the Institute of Eastern European Studies of the Free University of Berlin in an article entitled “NATO and Ukraine: let the Ukrainians decide democratically,” published on the portal sinpermiso.info, points out that in December 2007, less than 20% of Ukrainian citizens supported their country’s joining NATO.

Although after the 2013 coup d’état and the referendum in Crimea that established its incorporation into Russia, that figure increased to around 40%, a majority of more than 60% of Ukrainian citizens still reject their entry into the aggressive war organization led by the United States.

However, in his latest article, Ishchenko clarified that “the polls no longer included the most pro-Russian Ukrainian citizens [sic] from the territories that are not under the control of the Ukrainian government: Crimea and Donbass,” which makes it impossible to compare the numbers statistically.

Thus it is clear that the “conflict” in Ukraine is a contrived invention of the United States and Great Britain, with the complicity of European elites aimed in the short term at saving Biden and Johnson from a political debacle. At the strategic level, its goal is to consolidate a U.S.-British domination and hegemony in the world, even if this leads to a new war in Europe with the usual millionfold losses of human beings and material goods that Washington and London will see from afar.

Much later, a new “Normandy landing” [like that of June 1944] will be invented that consecrates the U.S. and Britain (through Hollywood) as “defenders of humanity,” even though they do it on the corpses of millions of citizens who today are hindered from obtaining gas at low prices and later will be cannon fodder for arms dealers to take advantage of the war to increase their profits.