This year’s Beijing Winter Olympics is the first in history to be carbon-neutral. This includes renewable energy in all game venues, introducing new low-carbon technologies and using transportation fueled by hydrogen, natural gas and electricity.

China completed the Zhangbei power grid station in time for the Olympics. That’s the world’s first renewable energy-based, flexible direct current (DC) power transmission system. This means, according to “China Daily,” the system has “strong controllability, fast power adjustment speed and a flexible operation mode, compared with AC and conventional DC. It is considered the “golden key” to solve the problem of large-scale consumption of new energy.” (tinyurl.com/jb24pk3t)

To save energy, China has refitted five venues from their 2018 Olympics, like the Water Cube, converted into a curling rink called the Ice Cube. The construction of 13 new buildings got the highest score under a Chinese green building certification system. 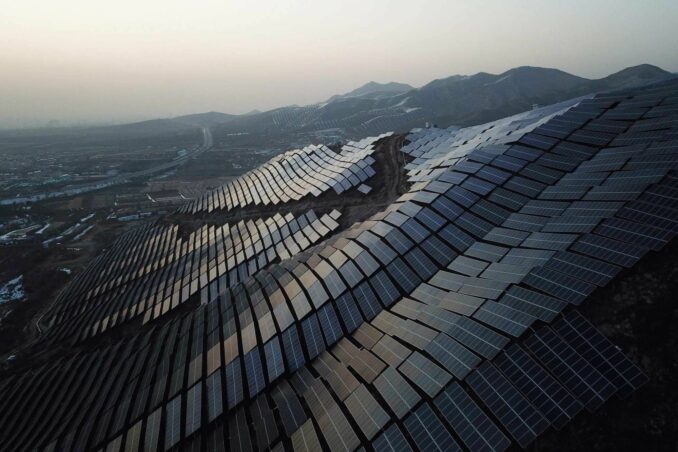 Solar panels on a Chinese mountainside.

China built a wind and solar infrastructure specifically for the Olympics. The country was already investing heavily in renewable energy toward the goal of carbon neutrality by 2060. By the end of 2020, more than 40% of China’s power generation came from renewable resources, supporting nearly one-third of the country’s electricity consumption. According to China’s National Energy Administration, the country generated more solar power than any other country globally and had triple the amount of wind power capacity as it had in 2019. (tinyurl.com/3kd8985f)

To offset this construction and the air travel costs to the environment, China is planting 60 million trees: white birch, oak and ginkgo, which will reduce CO2 output by about 1.1 million tons. From 1990 to 2015, China deployed 60,000 People’s Liberation Army soldiers to reforest large areas of China the size of Ireland. Called the “Great Green Wall” program, it reduced soil erosion, pollution and desertification and absorbed carbon dioxide. NASA satellite data shows that China and India are leading the world in an increase in greening on land. (tinyurl.com/568pbpw4)

These Olympics are the first to use natural CO2 refrigerant (also known as dry ice) to cool skating venues, instead of synthetic hydrofluorocarbon, estimating saving the release of up to 26,000 tons of carbon. (tinyurl.com/42x8ymrw)

China has been heavily criticized for creating artificial snow for sports events, a feature of most winter Olympics. However, Beijing has developed water-conserving technologies to optimize water usage. According to “Nature” magazine, the amount of water used in the Olympics is less than 10% of the water resources for the Yanqing and Zhangjiakou regions, which have more water compared with neighboring areas. China is limiting the impact of snowmaking by collecting the snow and reusing it after it melts. (tinyurl.com/3xrhpc32)

In the middle of the world pandemic, China is limiting the spread of COVID-19 at the Olympics by limiting spectators. This has had the effect of saving more than 500,000 tons of CO2, which would otherwise have been generated by the travel and accommodation sectors. Western media has been highly critical of China’s zero-tolerance approach — despite the fact that China has only had 4,636 COVID-19 related deaths, while the U.S. has had 942,944 recorded deaths as a result of the COVID-19 pandemic. (worldometer.org)

Marie Sallois-Dembreville, director of Corporate and Sustainable Development at the International Olympic Committee, said that Beijing’s thorough approach of accounting for sustainability at all stages of the process is “something we will encourage for future games.” (tinyurl.com/3xrhpc32)