On Jan. 20, hours before members of Boston School Bus Drivers, United Steelworkers Local 8751, were scheduled to take a strike vote, the drivers’ transnational, private employer Transdev and its City of Boston client came to the negotiating table with substantially more wages than the union was officially demanding.

But even in this unprecedented situation, the 1,000-strong Local 8751 made another pass which emphasized solidarity with the communities the union serves. Paid job training to recruit young drivers from the communities, COVID-19 protections, benefits for elder retirees and correcting racist history, in what’s known as “America’s Hometown,” were among the counterproposals dear to the largely Haitian and Cape Verdean drivers’ hearts.

While Transdev and the City have agreed for the first time to replace hated “Columbus Day” with “Indigenous Peoples Day” and delete the word “Thanksgiving” from the drivers’ paid holidays calendar, they have balked at the union’s demand to use Indigenous peoples’ experience and language for the fourth Thursday in November and recognize “National Day of Mourning.”

Below is a letter to Boston’s mayor from United American Indians of New England (UAINE) and the North American Indian Center of Boston (NAICOB) supporting the union’s demand to put its 40 years of solidarity with Indigenous nations into the contract books — and correct history from the workers’ point of view. 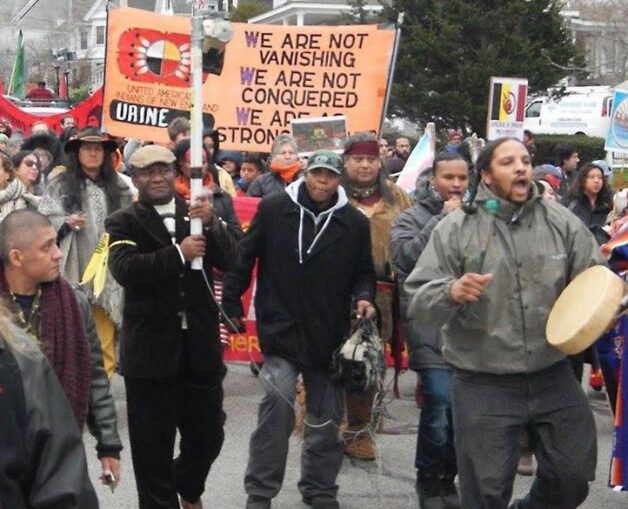 Re: National Day of Mourning in USWA Local 8751 contract language

We write today because we understand that there has been some objection expressed on the part of the City about the request of members of Local 8751 Boston School Bus Drivers to include a reference in their new contract to National Day of Mourning. We hope to be able to give you some background about this so that any impasse can be lifted.

The same holds true with National Day of Mourning. Local 8751 is supportive of the work that we do to dispute and correct the false narrative of peaceful relations between white settlers and Indigenous peoples that is perpetuated via the Thanksgiving holiday. A National Day of Mourning on “thanksgiving Thursday” was first declared in Plymouth in 1970 by Wamsutta Frank James and other members of both of our organizations, and it continues to be honored annually more than 50 years later, with extensive media coverage and many thousands of people now honoring the day. The 1970 suppressed speech of Wamsutta Frank James is in numerous anthologies and taught in hundreds of schools.

The largely Haitian and Cape Verdean membership of Local 8751 has endorsed and participated in the Plymouth National Day of Mourning for decades. The members’ lived experiences in their homelands and as immigrants within the U.S. are impacted by the systemic inequities of colonialism. As a result, these union members want to express their solidarity with Indigenous peoples right here in Boston where they live and work now. Around the world, there are holidays celebrating colonizers who invaded Indigenous lands, including Canada Day and Australia Day, and accompanying efforts by Indigenous peoples and allies to confront these holidays is international as well.

We have not sought to have Boston or any municipality officially declare a National Day of Mourning in lieu of Thanksgiving, and having the requested reference to the day in the Local 8751 contract does not seem to us to imply that the City is taking a position. Including the reference to the day is simply respecting the wishes of the professional union drivers who safely deliver thousands of children to schools across the city every day. We appreciate the solidarity shown by Local 8751 and ask that their desire to support Indigenous communities in their contract be accepted.