The current spike in COVID-19 infections among the incarcerated in prisons, jails and detention centers is not only alarming and life-threatening to tens of thousands of people, it is an urgent challenge for the prison abolition and prisoners’ advocacy movement. We must build a movement from California to New York to demand mass releases and prison closures during this pandemic. 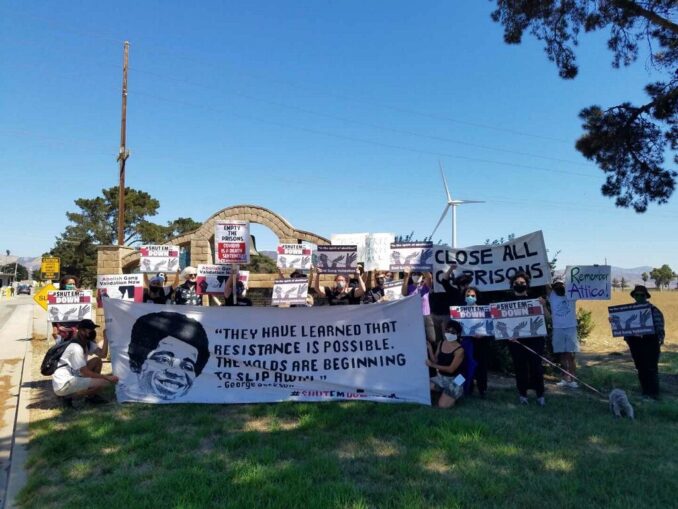 As someone who has worked for decades as an advocate for prisoners with HIV, Hepatitis C and other life-threatening illnesses, I know that it is impossible for our incarcerated siblings to get adequate medical care inside. The prison system is the antithesis of care, and mild medical problems all too often become life-threatening to people inside. In reality in the U.S., there is a large, aging population of poor people, Black, Latinx, Indigenous, Asian and white, who are locked away for decades and at risk of dying from COVID-19.

At the beginning of the pandemic, a group called No Justice Under Capitalism coined the phrase “No State Execution by COVID-19” and fought for mass releases. This group organized many demonstrations at the gates of San Quentin Prison after a prisoner transfer sparked widespread COVID-19 infections at that prison. Demonstrations were held at the state capitol and the offices of the California Department of Corrections and Rehabilitation in Sacramento. Concerned family members and NJUC even protested outside of California Governor Gavin Newsom’s suburban home.

A federal judge even ordered the depopulation of San Quentin Prison by 50%. The politicians promised mass releases. Did any of this happen? No, not in any real way. But infection rates did calm down for a period.

The omicron variant of COVID-19 has not only caused the infection rate to spike in the community, COVID-19 is currently running rampant in prisons, jails and detention centers throughout this country. The response of the jail and prison administrators is to cover it up, minimize the threat to prisoners’ lives and generally to pretend that it’s not a problem. But it is, and the real question is what are we going to do about it.

People who are incarcerated are incredibly vulnerable to COVID-19. Most of the incarcerated population have come from communities that have been underserved by a for-profit health care system. Many have chronic medical problems like diabetes, HCV, hypertension and respiratory illnesses that become life-threatening in the prison setting. These medical problems combined with COVID-19 can and have been a death sentence to many behind the walls.

Who is actually incarcerated right now? The U.S. Commission on Civil Rights just released its latest report, “The Civil Rights Implications of Cash Bail,” revealing the true nature of the incarceration system in this country. Between the years 1970 and 2015, there was a 433% increase in the number of people who were incarcerated pretrial. The number of people languishing in prisons and jails who haven’t even been convicted of any crime is growing exponentially. (U.S. Commission on Civil Rights, Jan. 20)

In fact, pretrial detention is a guaranteed racist institution with Black and Latinx detainees receiving more severe conditions of release. And according to this report, more than 60% of the pretrial incarcerated population (in court they are called “defendants”) are there in places like Rikers Island or Santa Rita Jail because they can’t afford bail! In many states, these pretrial defendants are placed in state prisons while awaiting trial. In fact, more than half a million people are sitting in jail or prison awaiting trial.

And what about our incarcerated siblings who have already been sentenced? In a racist, sexist, transphobic legal system, how can most of the incarcerated population ever get a fair trial? Organizations like RAPP, Release Aging People in Prison, have been working tirelessly to get elderly and immunocompromised prisoners released in New York State and around the country. “If the risk is low, let them go!” is their motto. And for most people inside, the risk is more than low — after decades inside it is time to release them all!

Political prisoners like Mumia Abu-Jamal, Leonard Peltier, Sundiata Acola and Dr. Mutulu Shakur have been held for decades by a racist, colonialist, criminal legal system for daring to expose and fight for the liberation of their communities. Our elderly political prisoners are at risk of dying behind the walls. All must be set free!

Workers World Party has long held the position that U.S. prisons are concentration camps for the poor and must be abolished. Some people may find that too unrealistic or too harsh. But abolition must be our uncompromising starting point. Protecting our incarcerated class from COVID-19 gives us that opening to push our abolitionist demands.

The capitalist system will not readily open its prisons, and it will not willingly provide lifesaving care for those inside. As we build and strengthen our movement for prison abolition (and prison means all forms of incarceration), we must not squabble about what is realistic. We must not compromise the survival of our incarcerated siblings. We must really mean “Free Them All.”

COVID-19 has given us that starting conversation but the real work is yet to be done. The time is now to build that movement to demand real prison closures, mass releases and work harder than ever to bring down this rotten capitalist system. The survival of our class depends on it.