On Jan. 5, 12 people, including nine children in an extended family, died in a row house fire in Philadelphia’s Fairmount neighborhood. All the victims were Black. Four days later on Jan. 9, a fire in a Bronx high-rise in New York City claimed 17 lives, including eight children. The complex housed a large community of Black and Brown residents, including West African migrants from Gambia. In both cities, the fires were the deadliest in decades. 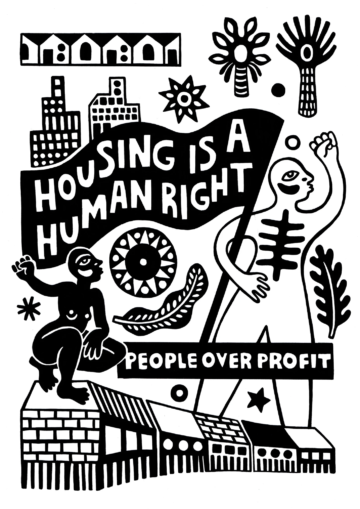 The poverty rate in Philadelphia, a majority Black and Brown city, is 25.7%, highest among the 10 largest U.S. cities. One of the most densely populated U.S. counties, the Bronx has a comparable poverty rate and also a people-of-color majority.

Between 1999 and 2021, the federal government’s failure to provide safe housing has led to residential fires killing Black people at more than twice the rate of white people.

Cuts in federal and state funding for affordable housing have drastically reduced availability over the past two decades. This is not by accident. In 1999, President Bill Clinton signed the Faircloth Amendment to the 1937 United States Housing Act, making it illegal for the federal government to build or fund more public housing units than existed on Oct. 1, 1999.

Since 1999, the U.S. population has grown by around 51 million. The inflation-adjusted median cost of buying a home has risen by 36.83%. At the same time there is a $70 billion backlog in funding to maintain and repair existing public housing. (National Nurse-led Care Consortium, tinyurl.com/46ew9nyh)

In the 1930s, massive workers’ protests against evictions forced the federal government to respond by establishing the Housing Act, which built millions of new homes. However, most of those publicly funded houses were constructed in predominantly white neighborhoods. Decades later, a majority of public housing residents are Black and Latinx, including immigrants. Single parent households with children comprise over 30%. People with disabilities make up 35%.

Two years before Clinton abandoned public housing, a 1997 study by the Federal Emergency Management Agency reported that overcrowding in housing would invariably lead to more fire deaths. The study commented: “One way low-income families deal with the lack of affordable housing is by doubling up in homes with extended family members or friends. By increasing the number of people in a given household, the number of potential victims of a fire also rises. This is especially true for households with very young or very old household members, who may be unable to escape flames or smoke on their own.”

In Philadelphia, the 12 McDonald family members who died, and two others who escaped, were living in an apartment managed by the Philadelphia Housing Authority. Under PHA codes, maximum occupant residency for the unit was eight. In 2011, PHA moved the McDonald family out of their previous home when the family grew to six people — two more than structure code allowed. In 2016, the PHA learned the family had again outgrown the apartment occupancy code, but this time the PHA did nothing. Without consulting the family, PHA put them on a waiting list that had been closed to new applicants since 2013.

Their apartment included the upper two floors of a three-story row house built in 1879. There were no fire escapes or sprinklers. A single stairway provided egress to exits on the building’s first floor.

Members of the family occupying the first floor who escaped the fire reported being awoken by screams from above, not smoke detector alarms. While the PHA claimed to have inspected the smoke detectors in May 2021, fire inspectors found no working units in the structure.

Although the Bronx fire was not in a public housing authority-managed building, it was in a federally subsidized housing complex, one of many owned by for-profit investors. Relying on several government incentive programs, a trio of investment firms including Camber Property Group, Belveron Partners and LIHC Investment Group purchased the 19-story Bronx tower in 2019 for $166 million. These investment companies, collectively holding assets worth billions of dollars, rank among the 20 biggest owners of affordable housing in the U.S.

Fire inspectors blamed a faulty space heater for the fire. However, most victims died from inhaling dense smoke that filled the complex’s exit stairways after two interior apartment doors failed to automatically close and contain the smoke.

While smoke detectors went off during the fire, tenants reported that smoke alarms rang so frequently, many residents came to ignore them. The building was not equipped with sprinklers or fire escapes. Residents had repeatedly complained about the lack of adequate heat, faulty safety doors and other code violations including mice, roaches and lead paint. Some of the survivors of the fire have filed a $1 billion lawsuit against landlords for code violations that caused the fire.

Housing crisis is a working-class issue

Workers in the U.S. are experiencing the worst housing crisis since the 1930s. Even before the onslaught of the COVID-19 pandemic, housing was increasingly unaffordable. In 2021, the National Low Income Housing Coalition found that nowhere in the U.S. was someone working a minimum-wage job able to afford a modest two-bedroom apartment.

Housing costs take up an ever-growing percentage of family income, forcing workers to choose between paying rent or feeding their families. Rising rents, a resumption of evictions and job losses due to the pandemic, coupled with rampant gentrification, have created a widening gap between need and supply. The NLIHC estimates there are only 34 housing units for every 100 low-income households.

Millions of workers are not safely housed under capitalism. You can’t be safe in a place that doesn’t provide heat in the winter. Working-class and oppressed people must demand a right to safe and affordable housing.