This open letter was written on Jan. 14 after a Justice March for Jason Walker, who was murdered by a Cumberland County, North Carolina, Sheriff’s deputy Jan. 8.

Today was a memorable day led by a coalition of social activist organizations in Fayetteville, North Carolina. It was a day of social unity standing against the injustice of Jason Walker and Black /Brown people killed by the police in the community. 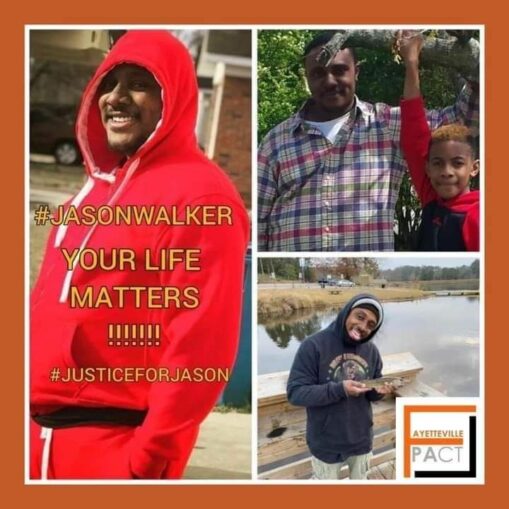 The event started with a gathering at the Cumberland County courthouse where the families of George Floyd, Breonna Taylor and Jason Walker all spoke out against the system murdering Black/Brown people. The Walker family spoke on unity in the community and how Black people need to stick together.

After the families spoke out, the community of organizers and activists took to the streets of downtown Fayetteville. The community marched from the courthouse toward City Council and the police station, which were several blocks from our starting location. The Black Panther Party chapters of Charlotte, Fayetteville and other surrounding areas supplied security for the rally. The only police presence throughout the whole event was the drones that flew overhead as we marched. 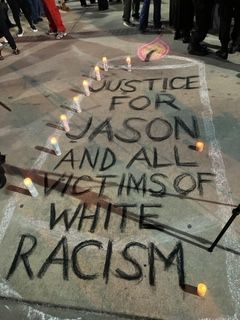 The community marched four times around the historical slave trade market house before heading down Hay Street toward the City Hall building.

The event was well organized with marshals and medics. There was not a police car in sight as the rally stopped and held up traffic, chanting, “Whose streets? Our streets!” along with other social justice chants.

As we marched toward the City Council and Fayetteville police station, more activists and civilians joined the peaceful march. Once the rally headed back to the courthouse for the conclusion of this portion of the Justice March, everyone took a knee (for all Black people murdered by the system) in the middle of a secured intersection, shutting down all traffic.

Once we arrived back to the courthouse, family and friends gave their reflections on who Mr. Jason Walker was to them. Walker’s cousin spoke and said that Jason had a revolutionary consciousness about the Black and Brown struggle in Amerikkka. Others that knew him said that he would do a lot of selfless service for members in his close-knit community and that Jason was a kindhearted person who loved people.

After the families spoke, we all released balloons in the air in [respect of the] life of Jason Walker.

After the march, the families of George Floyd, Breonna Taylor and Jason Walker met all the social activists at Smith Park, where everyone broke bread and socialized with one another. I was able to give condolences to the Walkers on behalf of myself and Black Workers for Justice. The event lasted for a little over four hours. We also had Sister Kass Ottley, a well-seasoned social activist against injustice and a United Electrical Workers (UE) project organizer from Charlotte come down to help lead the chants in the march in solidarity.

As I reflect on the events of today’s Justice March for Jason Walker, I see the need for the whole community to stand together in solidarity at all times, not just in the time of crisis. There is power in community once it is activated in solidarity.

When there is no justice, there can be no peace. We must hold this racist system of local, state and federal government accountable by any means necessary. We refuse to continue to be sheep for the slaughter.

Chris Hollis is a member of the Durham branch of Workers World Party.