Jan. 9 — Protesters angered by the water crisis persevere at rallies at the Hawai‘i Department of Health, the State Capitol in Honolulu and in front of the headquarters of the U.S. Pacific Fleet at Pearl Harbor, all on the island of O‘ahu. 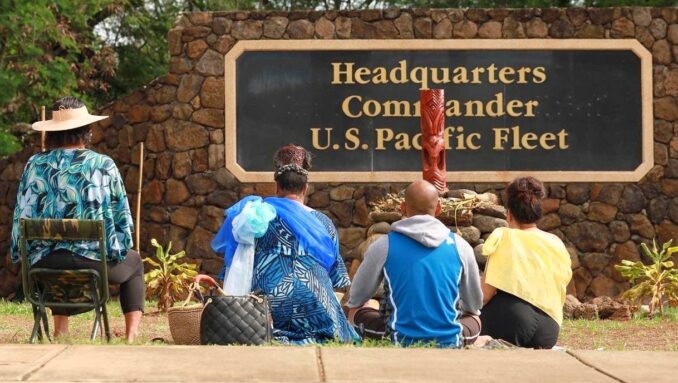 A group of Hawaiian organizations known as Ka‘ohewai celebrated the winter solstice with the Ke Ala Polohiwa A Kanaloa ceremony, in protest of water pollution by the U.S. Navy at Kapūkaki, also known as Red Hill. Credit: Kanaiʻa Nakamura

Local Hawaiians are coming together en masse to protest the desecration of the land and destruction of essential resources. The O‘ahu Water Protectors held a “die-in” at the capitol building on Dec. 10.

On Dec. 12, honoring the winter solstice, a coalition of Hawaiian organizations known as Ka‘ohewai built a ko‘a altar to the Hawaiian gods Kāne and Kanaloa at the U.S. Pacific Fleet’s headquarters and consecrated the ko‘a with hula, prayers and blowing the pū, or conch shell.

Pressure is unrelenting from locals, who plan to continue protest until the land is restored and reparations are given. On Jan. 4 they held protests outside the Hawai‘i Department of Health, with several Okinawan protesters condemning the U.S. Marine Corp.’s contamination of water in Okinawa and the U.S. Air Force’s contamination in Guam. (tinyurl.com/s23hyj36)

On Jan. 6, the U.S. Navy announced its plan to release up to 5 million gallons of treated water back into Halawa stream. The DOH has issued no permits for releasing the water yet. So far, the flushed water from the military base has failed safety tests, with fuel contamination exceeding the allowed 200 parts per billion.

Though the Navy has temporarily suspended operations at the Red Hill storage facility, it is defying a DOH order to decommission the fuel tanks. The Navy claims the order “operates in a regulatory vacuum, unlawfully exceeding DOH’s authority” and that “there is no evidence in the record showing that Facility operations pose an inherent risk of causing harm, such that merely resuming operations would automatically give rise to ‘grave risk; jeopardy; danger’ that is ‘likely to occur at any moment.’” (tinyurl.com/2p8m2n39)

But water protectors are unlikely to forget the effects of many thousands of gallons of leaked fuel that have been putting the population at risk since World War II.

In November 2021, 14,000 gallons of a water-fuel mixture leaked from a pipe in the facility’s fire-suppression system. On Nov. 20, Navy crews responded and reported the leak to the Department of Health. By Nov. 28, residents in the area began reporting fuel in their tap water. On Dec. 3, the Honolulu Board of Water Supply shut down the Halawa shaft, which is O‘ahu’s largest water source serving Honolulu. The Halawa Shaft pulls from the same aquifer as the Navy’s Red Hill well, so the aquifer that services 20% of O‘ahu’s population has effectively been shut down, affecting some 93,000 people.

Families in the Red Hill area have been suffering from fuel-related illnesses for months. A leak of 1,600 gallons of jet fuel was discovered in May, and 27,000 gallons of fuel from a single tank had leaked in 2014.

A source from within the Navy “leaked” a number of emails and documents to the Honolulu Civil Beat, which reveal a cover-up of a fuel leak in 2020. Documents show that as early as January 2020, the Navy was aware of the leak at Pearl Harbor.

Because of a permit renewal hearing for the Red Hill storage facility from Feb. 1-6, 2020, the leak was kept from the public. “There are significant political concerns if this were to become an ‘active’ leak,” one Navy captain wrote, “Activist organizations will use this to advance their anti-Red Hill narrative … at a sensitive time as the contested case hearing begins and (the) legislative season starts.” (tinyurl.com/2p8k3wxb)

The incident was reported to DOH on March 17, 2020. On June 2, 2020, a second leak was reported to DOH. Finally in June 2021, the Navy determined its fuel line at Hotel Pier was to blame for the repeated spills. Some 7,700 gallons of leaked fuel had been recovered in Pearl Harbor by July.

In all, data compiled by the Sierra Club Hawai‘i determines the storage facility at Red Hill to have leaked at least 180,000 gallons of fuel since its completion in 1943. (tinyurl.com/4kzrbhy9, sierraclubhawaii.org/redhill)

Military families came together Dec. 1 at a town hall meeting to express their frustration and to report their illnesses from hydrocarbon toxicity. Many reported itching, rashes, nausea, vomiting, diarrhea, dizziness and headache. Some were hospitalized; one family even had to euthanize their beloved dog.

At least 3,500 military families have moved to temporary housing in hotels in Waikiki, a popular O‘ahu tourist destination. Some 748 civilian families have been affected, according to Navy spokesperson Lydia Robertson.

But in Waikiki, displaced families encounter challenges that many locals have been struggling with for decades: high prices for food and essential goods; and hours-long commutes to jobs across the island.

For more than 1 million people who live on the island of O‘ahu, the response to the crisis at Red Hill’s storage facility is a matter of life and death. For Native Hawaiians, the crisis is a sign that the ‘aina (land) must be returned to its people, and Red Hill must be restored to Kapūkaki.