Starbucks workers at the Elmwood Avenue location in Buffalo, New York, the first corporate-owned Starbucks in the U.S. to unionize, walked off the job Jan. 5 in protest of unsafe working conditions and understaffing. 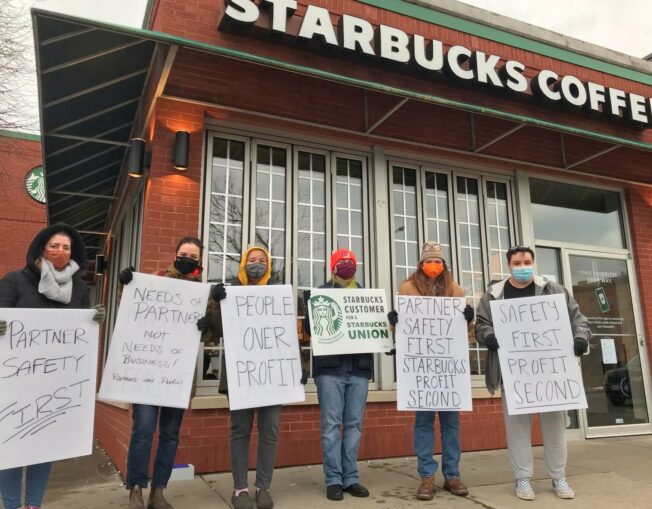 COVID-19 is tearing through Starbucks stores; and while many workers have raised concerns over safety measures, the corporation has consistently ignored them. Starbucks has ignored requests to provide N-95 masks and at times has not allowed workers to enforce state mask mandates.

Multiple stores in Buffalo have had outbreaks causing many workers to become infected. Some workers, who were exposed but not experiencing symptoms, preferred to remain isolated until they could be tested, but they felt forced to work anyway, because they would not be paid to isolate.

Starbucks could pay all workers who are exposed to stay home, as they did in March 2020. But as the Centers for Disease Control and Prevention (CDC) guidelines loosened, Starbucks’ own protocol followed in kind. Rather than living up to their stated principles and providing a safe work environment and allowing all workers who were exposed, regardless of vaccination status, to take paid time off to isolate, Starbucks continues to operate at a bare minimum as is required by law.

Starbucks’ policy, as well as current CDC standards, essentially forces workers to choose between safety and paying their rent.

Starbucks claims their policy is not unique and that they are simply following the guidelines set by the government. However, based on the over 830,000 people who died from COVID-19 in the United States, the CDC guidelines and state COVID-19 policies were clearly insufficient, even before they were slashed back. To contrast, China has less than 5,000 dead with a population of nearly a billion and a half people.

This highlights the root cause of the issue — that rampant capitalism is unable to handle crises like a pandemic as adequately as a predominantly socialist, planned economy can.

We know that huge corporations like Starbucks have a hand in shaping the policy around COVID-19. One example is how Delta Airlines requested the CDC shorten the isolation period from 10 days to five, just days before the CDC announced the change. When corporations are allowed to shape health standards for the whole country, profits are always put before safety, and workers are treated as disposable.