By Monday morning, Dec. 13, everyone with access to news media knew that a devastating series of tornadoes had hit the midsection of the U.S. Dec. 10, destroying whole communities and killing more than 50 people, including workers at an Amazon delivery center in Edwardsville, Illinois. 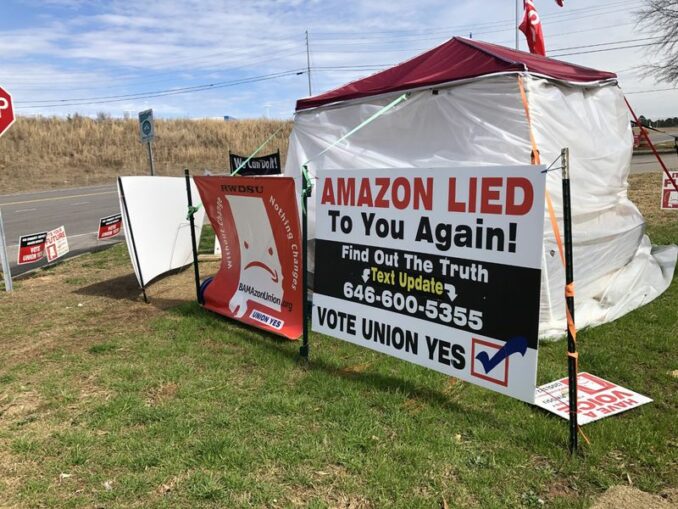 Union organizing at the Amazon warehouse in Bessemer, Alabama, has been ongoing since 2019 and is now heading toward a “Union Yes!” revote. See workers.org ongoing coverage.

Most of the deaths and much of the damage was in Kentucky, including at the Mayfield candle factory where it was first feared more than 100 people had died. Some 90 missing people were later found.

This writer and newspaper join with the demand for full federal and state governmental assistance for rescue and relief of the people of those areas.

Details of the destruction are available in much of the corporate media. One can make a strong argument that the climate crisis, caused by wanton pillage of the environment by the capitalist system, led to the superviolent storm.

The ruling class knows this very well, but — as the recent Glasgow climate summit displayed — their pursuit of profits prevents them from taking necessary steps to halt or even lessen expected future damage. This weekend’s disaster is a sign of what that failure of capitalism means.

This article focuses on the deaths that took place at an Amazon delivery center in southern Illinois. More than any other one entity, Amazon stands for wanton capitalist expansion and the drive for monopoly and superprofits to the detriment of the working class and much of humanity.

The demands raised here against this corporation should be read as just the beginning of what is needed to prevent damage from climate-crisis catastrophes harming the 99%.

The working class gains nothing from the capitalist system of exploitation. The superprofits of Amazon, which have made its key shareholder a centibillionaire, are based on the exploitation of more than a million workers in the U.S. alone and tens of thousands more worldwide. Amazon profits would go far if spent in defending the safety and well-being of those workers, with a ripple effect to other workers and oppressed people.

This holiday season, when capitalist advertising pushes everyone to buy, buy, buy, the Illinois Amazon center was working at full capacity Dec. 10 to get everything sold and deliver the packages.

After the catastrophe, the Edwardsville authorities were unable to report how many workers were on Amazon premises when the tornado knocked the building down. The reason: Only seven of the workers there were permanent Amazon employees.

An article in The New York Times, Dec. 12, clarified, “The more than 250,000 drivers . . . who fuel Amazon’s delivery network do not work directly for the company but instead are employed by over 3,000 contractor companies.”

This strategy of using contractor companies is no accident. It’s management’s direct attack on the working class. It allows Amazon to use the labor of workers paid even lower wages than the pittance Amazon pays permanent workers.

The tactic allows Amazon to avoid liability, putting the responsibility on small capitalist contractors, who hire a large proportion of what is actually an Amazon workforce. If conditions are unsafe, workers stretched beyond their limits, drivers falling asleep at the wheel, Amazon management claims that’s not their responsibility.

With the workforce divided among many subcontractors, organizing workers into a union is much more difficult — another obstacle to unionizing on top of Amazon’s other repressive union-busting tactics. And Amazon’s nonunion delivery network competes with unionized delivery companies like UPS, further attacking workers’ wages.

So at the devastated distribution center, Amazon management didn’t even know who was there.

The Retail, Wholesale and Department Store Union — in a union drive with workers at an Amazon facility in Bessemer, Alabama, since February 2020 — has criticized Amazon for keeping the Illinois site open during the emergency.

These demands are directed at Amazon’s management. Environmental organizations have already made demands on ruling-class entities in attempts to mitigate the climate crisis.

What the most recent disaster emphatically shows is that Amazon workers need a union representing the company’s more than a million workers, if these or other necessary demands are to be accomplished.

Make Jeff Bezos wish he stayed in the stratosphere.