On Nov. 25, 1,300 Indigenous people and their supporters gathered on Cole’s Hill in Plymouth, Massachusetts, to observe the 52nd annual National Day of Mourning.

Kisha James (Aquinnah Wampanoag and Oglala Lakota), youth leader of United American Indians of New England (UAINE), opened the rally: “Once again on the fourth Thursday in November, United American Indians of New England and our supporters are gathered on this hill to observe a National Day of Mourning for the Indigenous people murdered by settler colonialism and imperialism worldwide. Today marks the 52nd time we have gathered here to mourn our ancestors, confront settler mythologies and speak truth to power.” 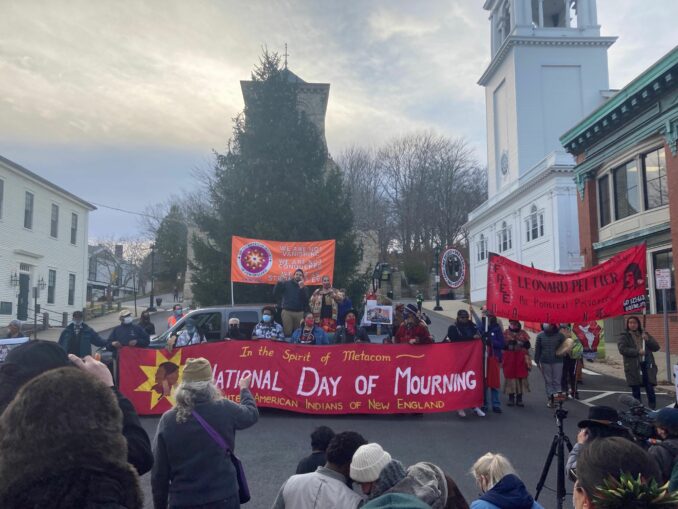 James proceeded to deconstruct the Thanksgiving myth, pointing out that the first official day of thanksgiving was proclaimed in 1637 to celebrate the massacre of hundreds of Pequots at the hands of the settlers. James concluded by saying: “We will not stop until the oppression of our Two-Spirit siblings is a thing of the past. . . . When children are no longer taken from their parents and locked in cages. When the Palestinians reclaim the homeland and the autonomy Israel has denied them for the past 70 years. When no person goes hungry or is left to die because they have little or no access to quality health care. When insulin is free. When union busting is a thing of the past. Until then, the struggle will continue.”

Melissa Harding-Ferretti, chair of the Herring Pond Wampanoag Tribe, offered a prayer in Wampanoag and welcomed the crowd to the tribe’s territory in Plymouth.

Mahtowin Munro (Oglala Lakota), co-leader of UAINE, spoke about the devastation caused by residential schools and Indian boarding schools: “I hear a lot of people talk about reconciliation. Reconciliation is when you try to repair an existing relationship. . . . I don’t feel like we have ever had enough of a good relationship with settlers to think that something that has been so ugly can be reconciled or repaired. For example, can the damage done by residential schools ever actually be repaired?”

Munro continued, “Hundreds of these schools were run for decades by governments and missionaries that made it their mission to ‘kill the Indian to save the child,’ all too often abusing or killing the child in the process. Thousands of the children died at these institutions. . . . In Canada, some of the school grounds have been searched this year, and the remains of more than 7,000 children have been found. More than 7,000 children buried in unmarked graves! How can that be reconciled? . . .

“Here in the U.S., the Interior Department has now said that they are going to try to find out how many children lie in graves at the boarding schools. Every child they find, and every child whose remains have already been found, needs to be brought home to their families and tribal communities. We cannot rest until this happens. Bring the children home!”

Peltier’s remarks were in part: “When we started to emerge from the darkness of residential schools, it became clear that we had to go back to try and reclaim what they robbed from us. And what they robbed us of was the very heart of who we were — our language, our ways and our connections back home. They wanted us, leaving those ‘schools,’ thinking like little non-Indians, who would just go along with the program and not rock the boat.

“Even with all the terrible damage they did to so many of us, many of us did survive them. . . . I am so deeply saddened in hearing the stories of all the children’s graves they are finding at residential schools. I guess I was one of the lucky ones who made it home. But the death of those children is so sad and outrageous, and I am glad the world is finding out at last.”

Ina Metztli Inaru’nikia (Taino) emphasized the importance of unity in her speech.

The crowd marched through the streets of Plymouth before gathering around Plymouth Rock where further speeches were heard. Samantha Malthais (Aquinnah Wampanoag) spoke about her work with Survival International and the #MayflowersKill campaign. June Sapiel (Penobscot) spoke about some of the issues facing her people. Ayeta Aronson (Bulbancha Collective) spoke about the devastation Hurricane Ida has caused tribal communities in Louisiana.

The crowd then marched to Post Office Square, the site where Wampanoag leader Metacomet’s head was displayed on a pike in the 17th century. Rebecca Lodgepole (Chippewa-Cree Tribe) spoke about Missing and Murdered Indigenous Women, and Jean Luc-Pierite (Tunica Biloxi) closed the program by expressing his hope that in future years everyone would be celebrating the death of settler colonialism rather than mourning the deaths of Indigenous people.