The continuing U.S. COVID crisis was predicted in a book published a year ago.

“Capitalism on a Ventilator,” a unique anthology by 50 progressive commentators — written even before the vaccines were rolled out — explained why the much anticipated vaccines alone could not solve the soaring COVID death rate in the U.S. 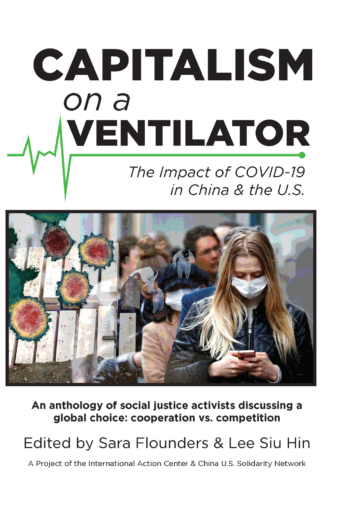 The rapid global spread of the omicron variant of the coronavirus, first publicly identified on Nov. 24, raises again earlier warnings that health care for profit is more deadly than the COVID virus itself.

The information in “Capitalism on a Ventilator,” which documented the impact of COVID-19 in China and the U.S., was suppressed in the U.S. within capitalist distribution channels and media networks.

Many of the book’s authors explain that the lack of a coordinated national health plan, the chaotic for-profit approach to testing and the corporate-controlled vaccine development and distribution would continue to have a devastating impact throughout much of the world. These warnings, despite the continuing health catastrophe, are still being ignored.

Omicron — not the main danger

On Nov. 24, South Africa announced an extremely contagious new variant, dubbed “omicron,” had been identified. The New York Times reported Dec. 6. that the variant had begun spreading through the U.S. before that announcement. A Manhattan convention event of 53,000 people was the superspreader, undetected due to the slow, uncoordinated testing in the U.S.

Rather than put in place a rapid genomic testing system, the Biden administration blocked all travel from South Africa. But the same omicron variant was quickly identified throughout Europe and in countries bordering the U.S. Scientists in many other countries are testing millions of samples of the COVID virus to spot new mutations, in order to keep tabs on how the virus is evolving and how rapidly it is spreading.

The U.S. racist strategy was to blame an African country for discovering a new variant, through its more conscientious testing. This is similar scapegoating to previous U.S. propaganda blaming China for first alerting the world to the emergence of the COVID virus.

The U.S. has consistently demonized China as somehow responsible for the COVID-19 pandemic, after that country announced in December 2019 that it was suddenly dealing with an unknown virus. But in fact scientists in several European countries have found that the original COVID virus was circulating in Europe before the outbreak in China. (tinyurl.com/b7zrhfny)

Spanish virologists at the University of Barcelona announced in June 2020 that they had tested a sample of Barcelona wastewater collected March 2019, nine months before COVID-19 was identified in China, and found traces of the novel coronavirus in that wastewater from Spain. (Reuters, June 26, 2020) BBC reported May 5 and June 19, 2020, that there were early COVID findings from wastewater samples from France and Italy. (tinyurl.com/w9tup3ts)

To date the U.S. has not announced that there has been any testing of any blood samples taken in the U.S. before China’s initial announcement of the virus in Wuhan.

Meanwhile, the process of genomic testing for variants within the U.S. is slower, far more sporadic and completely uncoordinated. Even the U.S. Centers for Disease Control and Prevention sequencing process takes 10 days to complete after receiving a specimen. In some states it takes a month to complete the tests.

For-profit health care is a killer

What was predicted a year ago has been proven: COVID deaths in the U.S. have tripled since the vaccine rolled out. The U.S. has 4% of the world population yet consistently has almost 20% of worldwide infections, according to Johns Hopkins University School of Medicine Coronavirus Resource Center. The U.S. has consistently had the highest number of COVID deaths of any country: 790,442 deaths as of Dec. 5, 2021. (coronavirus.jhu.edu/map)

But Big Business media, competing politicians and uncoordinated national, state and city bureaucracies kept trying to convince the U.S. population that the vaccine itself would end the deadly scourge.

The U.S. ranks last in the percentage of fully vaccinated people in its population, behind the other G7 developed economies — after Britain, Canada, France, Germany, Italy and Japan. (tinyurl.com/3uxavryc)

Even more damning is that the U.S. still ranks 44th in the list of countries in the percentage of people vaccinated. According to the U.S. CDC, as of Dec. 2, only about 197.8 million people, or 59.6% of the total U.S. population, have been fully vaccinated. (tinyurl.com/yc4dxyxs)

Extreme inequalities in health insurance coverage in the U.S. are linked to the spread of the virus and its deadly impact. Racial health disparities, including access to care, have led to disproportionate deaths in communities of color. Shortfalls of needed medical supplies and treatment exist — the U.S. has only half the hospital beds per capita of peer nations.

What could have been prevented

A March 16 report from Public Citizen detailed how hundreds of thousands of deaths and millions of infections would likely have been prevented under a Medicare for All plan. The report evaluates that one-third of COVID-19 deaths and 40% of infections were tied to a lack of insurance.

The U.S. remains the only one of the 25 wealthiest countries to fail to provide universal health care. Even before the global pandemic, the country’s health care system focused on profits and not health and cost tens of thousands of lives annually. Significantly more people — especially people of color — are more likely to die in this system of chronic respiratory disease, cardiovascular disease, diabetes or cancer than people in other comparably wealthy countries with universal health care systems.

“Capitalism on a Ventilator” was written to expose how the pandemic health crisis resulted from a for-profit system that will never deliver health to working and oppressed people. This collection graphically describes the chaos of a time when schools and offices shut down to stop the virus from spreading. Hospital intensive care units were overflowing, and refrigerated trailers became makeshift morgues. States fought over protective equipment and high-tech ventilators.

Since that spring of 2020, repeated surges have overrun the capacity of too many hospitals and traumatized health care workers. But each surge is dismissed as a surprise development of an unpredictable virus — rather than the indictment of a system broken for profit.

The hollowed out health network

A continuing theme in “Capitalism on a Ventilator” is that the U.S. public health network — never completely robust — has been “hollowed out” from years of underfunding, neglect and competitive health monopolies. This is the reason that the high death toll from COVID now continues.

About 50 million people in the U.S. — almost a sixth of the population — have been infected with the COVID-19 virus. Millions of people are now suffering with “Long COVID” aftereffects and other severe, chronic problems. They will continue to need extensive care at overstretched and understaffed health facilities.

The Bureau of Labor Statistics estimates that the U.S. health care sector has lost nearly half a million workers since February 2020. Morning Consult, a health survey research company, says that nearly 1 in 5 health care workers have quit since the pandemic began, while 12% have been laid off. The same survey found that 31% of remaining health care workers have considered leaving due to their utterly grueling work conditions and because hospitals are cutting salaries, reducing benefits, canceling raises, while forcing staff to work more shifts with longer hours.

COVAX fails in its promises

COVAX — an ambitious global collaboration set up early in the pandemic to give people in rich and poor nations equitable access to the shots — has failed to meet any of its many promises. The World Health Organization project was set up to keep vaccine profits and patents in the hands of private corporations. Though the pledge was to give vaccines away free or below price to poor countries, the goal was actually to maintain multibillion-dollar vaccine profits for Big Pharma.

But China alone has directly provided over 2 billion vaccines to the Global South. Of far greater significance is the fact that China is providing the information, raw material and technology so that countries can begin to manufacture their own vaccines. Cuba, who developed its own vaccines, is also distributing hundreds of thousands of doses to low-income countries, particularly those targeted by the U.S., like Venezuela and Iran.

A different social system than that of the U.S. exists in some of the countries that are more successfully managing and controlling the spread of the COVID-19 virus — countries like China, Cuba and Vietnam.

But rather than investigate how China was able to accomplish the control of the virus within its own country and provide global assistance, the U.S. response is to escalate virulent anti-China propaganda.

“Capitalism on a Ventilator” evaluates these two social systems, both confronting a medical crisis: Capitalism, under which everything is dictated by the needs of finance capital; and socialism, which can organize society by prioritizing people’s needs.

China has been able to decisively break the chain of infection in its country of billions — and has done so repeatedly, each time there has been a virus outbreak or appearance of a new variant.

But China’s approach is only possible in a country that is highly organized to prioritize human needs — to value people over profits.

In the Western media, China’s approach is portrayed as top-down, oppressive rule by the state. In reality China’s systematic plan to control the pandemic was a collaboration between the state and hundreds of thousands of citizen volunteers.

Several chapters of “Capitalism on a Ventilator” describe the grassroots, citizen-based involvement, coordinated dynamically with the state.

China still maintains an important base of urban and rural civil organizations developed in China in the 1950s. From the early stages of China’s Wuhan lockdown — where the pandemic was first identified — members of these committees mobilized to conduct door-to-door temperature checks and deliver food and supplies, especially to elderly residents.

Connected but decentralized activities of volunteer members of the Communist Party replaced nonparty medical workers, who didn’t feel safe exposing themselves to the virus, or who were at greater risk.

There were levels of coordination only the state could carry out, including the rapid building of hospitals and the guarantee that all medical treatment for COVID-19 patients would be free. A steady supply of food and fuel at normal prices was ensured by state-owned industries that increased the supply of rice, flour, oil, meat and salt and cracked down on price gouging and hoarding.

The China-U.S. Solidarity Network along with the International Action Center are responsible for the publication of “Capitalism on a Ventilator.” This is a book indispensable to understanding concretely how capitalism will always put profits first and let people, including the most vulnerable, die — while socialist planning can meet the needs and save the lives of a country’s people, especially in the middle of a global pandemic.

“Capitalism on a Ventilator” has been translated into Chinese and will soon be available in print in China. The book is available in English online at