Dec. 5 — The California prison system continues to outdo itself in reckless and inhumane treatment of incarcerated people.

COVID rates are spiking again in the state’s prisons, due to continued policies of mass incarceration. A recent court decision has severely gutted the state’s medical parole process. Now it is only prisoners on ventilators — those who are almost at death’s door — who can be released to nursing homes! 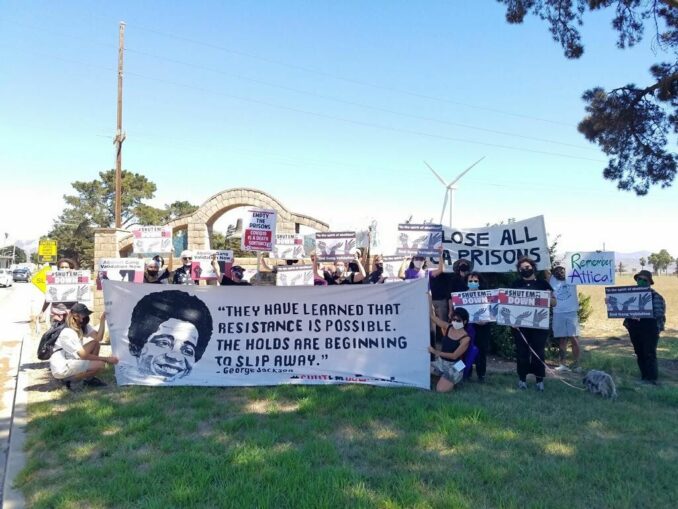 Protesters gather at the gate of Soledad State Prison in July 2020 to protest cell extractions that led to a COVID outbreak and deaths. WW Photo: Judy Greenspan

California has a long, sordid history of fueling the growth of the Prison Industrial Complex in this country, which was accelerated during the 1970s by the infamous U.S. government war on poor people who use drugs. California’s prison system has been a hideous example of a criminal system bent on incarcerating greater and greater numbers of Black, Latinx, Indigenous and poor white people.

When the pandemic began, prison infection rates soared due to reckless transfers of incarcerated workers. San Quentin State Prison had an infection rate of two-thirds of the people locked up there. A state judge was forced to order that the prison population at San Quentin be cut in half.

Calls for the mass release of prisoners came from prisoner support and prison abolition groups like No Justice Under Capitalism, Critical Resistance and the Prisoners Solidarity Committee of Workers World Party. Gov. Gavin Newsom, no friend of the incarcerated population, was forced to order some releases. But COVID spread rampantly through the prisons and many prisoners died inside.

As of Sept. 21, according to the California Department of Corrections, 243 prisoners have died of COVID behind the walls. (tinyurl.com/4afx2rn8)

Since the beginning of November, COVID cases and deaths have started spiking again in the state’s prisons. COVID infections keep increasing despite incarcerated workers in California state prisons having high vaccination rates. Unfortunately, the vaccination rate of prison guards has lagged behind.

There are now COVID outbreaks in several prisons, including the Central California Women’s Facility, where 81% of prisoners are vaccinated compared to only 65% of the guards. Chuckawalla Valley State Prison, the California Medical Facility at Vacaville and the California Correctional Center experienced new outbreaks in mid-November. (The Davis Vanguard, Nov. 16)

In 2014, the state prison system began a medical parole program, which allowed the release of 210 severely incapacitated and disabled prisoners to nursing homes.

But an aging prison population, substandard prison medical care and the COVID pandemic should mandate more releases, not fewer.

Medical parole, along with compassionate release, is available but rarely granted in most prison systems around the U.S. The new federal rule will make it almost impossible for anyone to receive medical parole. (tinyurl.com/y482rjuy)

A recent San Francisco Chronicle op-ed column makes an important plea for the immediate release of large numbers of California prisoners. The spike in COVID rates inside is directly connected to the increased incarceration of people in jails and prisons. (tinyurl.com/5dm8hcwr)

As the prison abolition movement has pointed out time and time again, in order to reduce COVID infection in prisons and jails, the best action is to release large numbers of incarcerated people. There is little or no health care for people inside and no social distancing. The prison guards are fighting vaccinate mandates and are actively bringing COVID to the prison population.

The revival of a militant, visible prisoners’ rights movement here in California is needed to win mass releases and to force the California Department of Corrections to enact real medical parole and compassionate release programs, enabling prisoners to spend their last days with family and friends in the community.