Workers World Party issues this solidarity editorial on the anniversary of the imprisonment of Mumia Abu-Jamal. 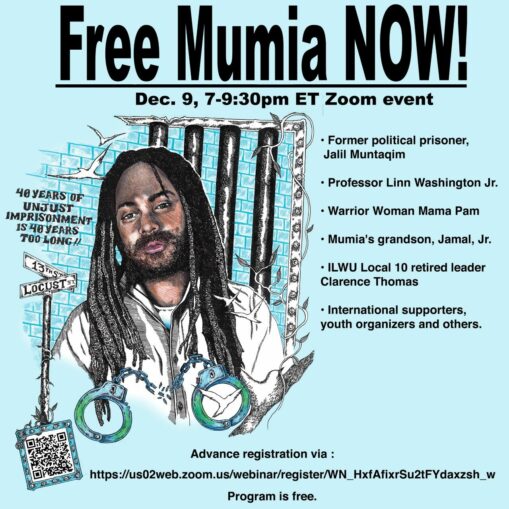 December 9 marks 40 years since Black Panther Party member, activist and revolutionary journalist Mumia Abu-Jamal was framed for the murder of a Philadelphia cop. As a result of police, prosecutorial and judicial misconduct in a highly contested trial, Abu-Jamal was given the racist death sentence in July 1982. Since 1981, he has been incarcerated under inhumane and illegal imprisonment — including almost 30 years in solitary confinement on Pennsylvania’s death row.

Despite numerous appeals, in July 1995 then-Pennsylvania Governor Tom Ridge signed Abu-Jamal’s death warrant to be carried out on Aug. 15 — in the midst of Black August. An international movement responded, filling the streets of Philadelphia and other cities with thousands of protesters, forcing the state to back down. Workers World Party was key among organizers of that protest and many since.

The Fraternal Order of Police and their reactionary supporters have pushed for Mumia’s murder since his unjust conviction, never failing to hide their white-supremacist views. As a nationally recognized Black journalist, Abu-Jamal found himself in their crosshairs when he confronted racist Philadelphia Mayor Frank Rizzo, former head of the police department, over his brutal and bigoted handling of the August 1978 confrontation with the MOVE organization.

The FOP was dealt a major blow when — after nearly two decades of international protests — Mumia’s death sentence was overturned by a federal court ruling in December 2001. After another 10 years on death row, in 2011 he was given a just as cruel, life in prison without parole sentence. But this wasn’t good enough for the reactionaries. They wanted him and all other Black political prisoners to suffer and die.

The movement said: Hell no! Mumia Abu-Jamal will be free!

The struggle to free our brother has only grown stronger throughout the last 10 years. In 2016 a door opened in the legal struggle for his case to continue on appeal, based on the U.S. Supreme Court ruling Williams v. Pennsylvania.

What is crystal clear is the pressing need for the movement, determined to win Mumia’s release, to continue to grow — despite every effort by the FOP, the courts and other capitalist state forces to block his liberation.

Workers World Party joins millions of voices around the globe demanding the immediate freedom of Mumia Abu-Jamal, who is 67 and suffering numerous health issues. We continue to speak his name and fight to free him and all other political prisoners — Sundiata Acoli, Dr. Mutulu Shakur, Ruchell Magee, Leonard Peltier and so many other incarcerated elders. We say free them all! Tear down the walls! 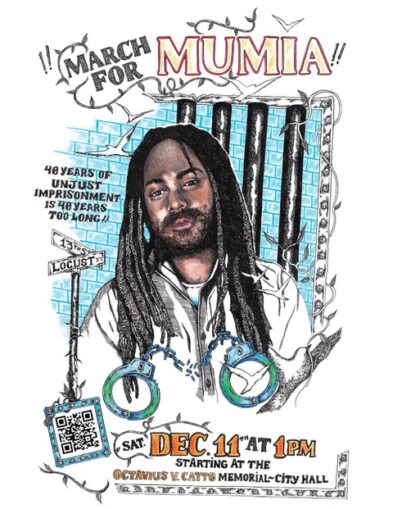 Demonstrations in solidarity are being held Dec. 9-11, in Philadelphia, France, Germany, Mexico and elsewhere. There will be a webinar Dec. 9 to honor Mumia and discuss our struggle to free an incredible revolutionary. Register at bit.ly/3rsz7Jl