This slightly edited article first appeared on the Council on Hemispheric Affairs (COHA) website on Nov. 22 at tinyurl.com/2p8n6n87. The article was updated on Nov. 23. Translations into English are by the authors. 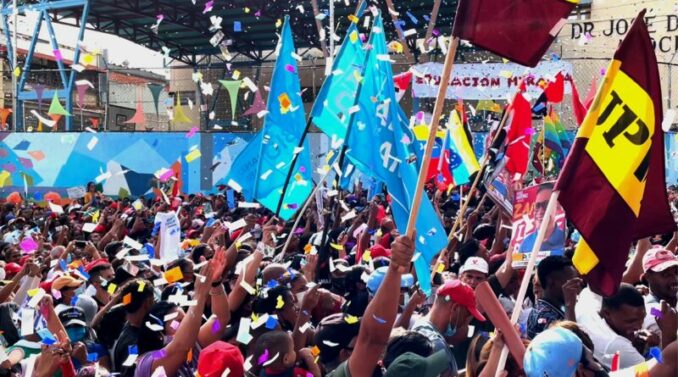 On Sunday, Nov. 21, Venezuela held mega-elections, in which more than 70,000 candidates from across the political spectrum ran for 3,083 state, city and local offices, marking a resounding victory for this nation’s sovereignty and democratic institutions in the face of Washington’s illegal economic war and the ravages of the pandemic.

As this article goes to press, according to the data presented in the first bulletin of the National Electoral Council (CNE) the governorships of 18 states have been won by the Chavista coalition of the Great Patriotic Pole (GPP)*; three states, Zulia, Cojedes and Nueva Esparta, went to representatives of the opposition, and two states are too close to call, Apure and Barinas. These two states, in addition to Zulia, are located along Venezuela’s frontier with Colombia, a zone vulnerable to the penetration of Colombian paramilitaries and organized crime.

According to Venezuelan journalist Eugenio G. Martínez, divisions among the opposition diluted the votes of opposition candidates in several states, possibly impacting the outcome in close elections in Barinas, Lara, Mérida, Monagas and Táchira.

The participation rate and close races in several states are a wake-up call to Chavismo of the need to fortify their base; for the opposition it portends an opportunity, should they manage to forge unity in future electoral campaigns. 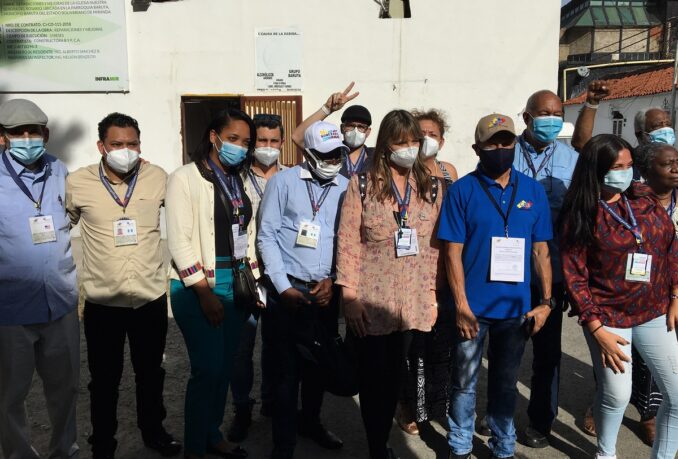 Some of the 300 observers from 55 countries and major electoral observer commissions including the Carter Center and the European Union (EU) in Caracas to observe the electoral process.

It appears that the U.S. has taken a back seat to these historic elections. While the State Department has been busy cultivating an already defunct and notoriously corrupt shadow government, without political relevance outside the beltway, more than 300 observers from 55 countries and major electoral observer commissions, including the Carter Center and the European Union (EU), were welcomed to Caracas to observe the electoral process. In a preliminary response to a query about the elections on Sunday, chief of the EU mission Isabel Santos said everything was proceeding “calmly.”

The case of Alex Saab

An important backdrop to the elections is the U.S. kidnapping of Venezuelan diplomat Alex Saab on Oct. 16, charging him with conspiracy to commit money laundering. This Colombian businessman became a target of Washington’s ire, because he had the audacity to use his extensive international business contacts to circumvent illegal U.S. sanctions to import food, fuel and medicines to Venezuela, all at great personal risk, in order to save lives.

The kidnapping of the diplomat was a blatant violation of the Vienna Convention on Diplomatic Relations (1961). It signals Washington’s commitment to continue imposing crippling sanctions. And it dealt a temporary setback to the Norway-brokered talks between the government of President Nicolás Maduro and the opposition taking place in Mexico.

Another door to negotiation remains open, however, as major opposition candidates voiced support for the electoral process as the appropriate path for settling political differences, signaling the feasibility of their coexistence with Chavismo.

The opposition and the U.S. sanctions

Moreover, most of the opposition participated in these elections, and several prominent candidates used their newfound disdain for sanctions as a selling point for their campaigns, and for good reason. The use of such coercive measures by a foreign power as political leverage is immensely unpopular with the majority of Venezuelans. Supporting U.S. sanctions today, for a Venezuelan politician, is tantamount to political suicide.

For example, the Secretary General of Democratic Action Party, Bernabe Gutiérrez, asked people to vote, tweeting: “The era of guarimbas (violent demonstrations) is over. The time has come to say goodbye to coups, sanctions and calls for invasion. We Venezuelans have to settle our own problems.”

Of course, there was the ever present threat of a terrorist attack by those extremists who see coexistence between Chavismo and the opposition as the ultimate threat to their hard-line agenda to bury all vestiges of the Bolivarian revolution. Thanks to the government’s regional and municipal security plan, however, an arms cache was reportedly intercepted, and election day activities took place in an atmosphere of peace.

These elections constitute an important victory for the Venezuelan people, because despite the U.S.-imposed sanctions, the pandemic and attempts by Washington to politically isolate this Caribbean nation, the National Electoral Council (Consejo Nacional Electoral, CNE) managed to pull off regional elections with the participation of a plurality of parties in an atmosphere of peace.

*Update November 23, 2021: The state of Apure has been won by GPP (PSUV) candidate Eduardo Piñate.

William Camacaro is a Senior Analyst at COHA. Frederick Mills is Deputy Director of COHA and electoral observer during this past election.