Crowds of “sympathy striking” union workers jammed the sidewalks at Kaiser hospital in Oakland Nov. 18 and 19, accompanied by a choir of honking horns and rousing chants. The all-day pickets were there to support Stationary Engineers Local 39, on strike for nearly two months at Kaiser. 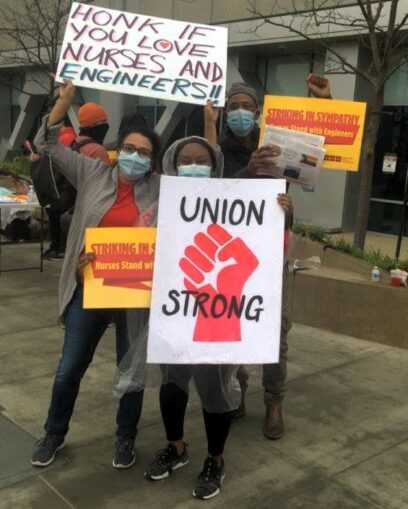 Short staffing is a major issue affecting all hospital workers and their patients. Local 39 says it is striking because Kaiser refuses to bargain in good faith over wages that are below what engineers make at other area hospitals.

UHWW issued a fact sheet on “sympathy striking at Kaiser.” Here are some key points:

“Doesn’t the ‘No Strike’ clause in our contract prohibit us from engaging in a sympathy strike? No. The Ninth Circuit Court of Appeals has ruled that . . . a general no strike clause does not prohibit sympathy strikes. [Children’s Hospital v. California Nurses, 2002]

“Can Kaiser legally fire or discipline me for sympathy striking? No. Since our sympathy strike is a protected, concerted union activity, it is illegal for Kaiser to even threaten an employee with discipline.”

Dave Welsh is a delegate to both the San Francisco and Alameda County Labor Councils.