After a trial thoroughly tainted by racism, on Nov. 19 a jury acquitted white supremacist Kyle Rittenhouse on all counts in the murder of two people and shooting of a third at a Black Lives Matter protest in Kenosha, Wisconsin, Aug. 25, 2020. That rally was protesting the shooting of Jacob Blake, a young Black man, by Kenosha cops. 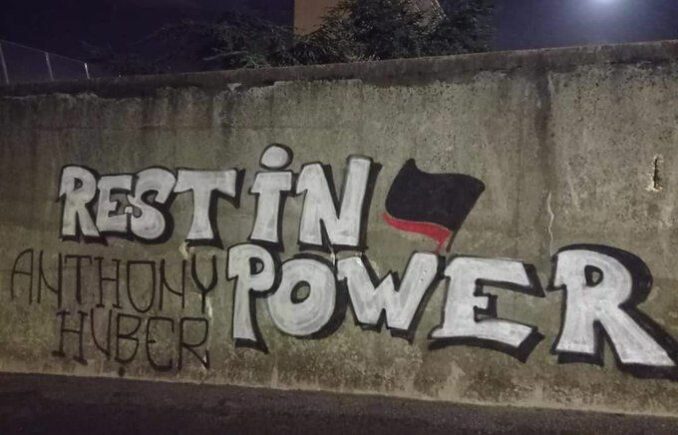 After the verdict was announced, Jacob Blake’s uncle, Justin Blake, standing outside the county courthouse, said: “What we saw here was a terrible, tragic injustice. These young men were trying to support my nephew, shot seven times in the street in the back, in front of his children. The mayor, the police chief, the people who were running the Army, they all have blood on their hands today.” (Kenosha News, Nov. 19)

Across the U.S., activists quickly organized rallies on the day of the verdict and continuing the weekend of Nov. 20-21. These asserted fierce and brave determination to oppose white supremacy and defend Black Lives Matter. Participants rallied to emphasize no backing down in the face of vigilante or state intimidation. Dozens of rallies were reported, including the following. 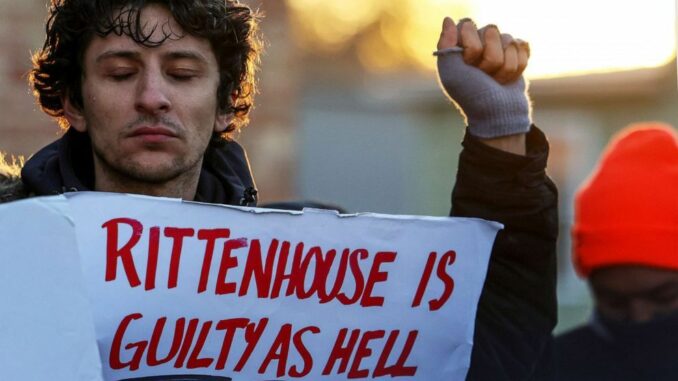 In Kenosha, Wisconsin, Nov. 19, people took to the streets to trace Rittenhouse’s route the night he attacked. Demonstrators carried signs that read: “Reject racist vigilante terror” and “The whole system is guilty!” Protesters chanted “No justice, no peace” and “Anthony and Jo Jo,” referring to Anthony Huber and Joseph Rosenbaum, the two white anti-racists shot and killed by Rittenhouse. 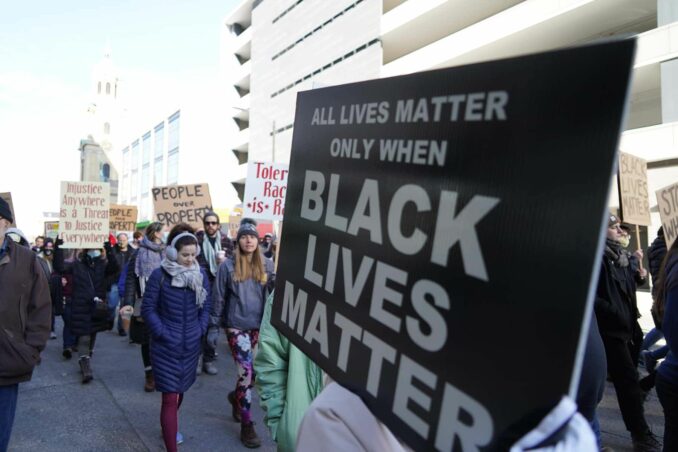 In Milwaukee — 40 miles from Kenosha — people marched Nov. 20 from Red Arrow Park to the federal courthouse to voice their outrage. Protester Mariah Smith said, “Understand — in the world there is a public enemy number one, and it is Black folks; and if you stand with the public enemy, you are a public enemy as well. For them [Huber and Rosenbaum] to come out and to stand with us, and they lost their lives, speaks volumes.” (Milwaukee Journal Sentinel, Nov. 20) 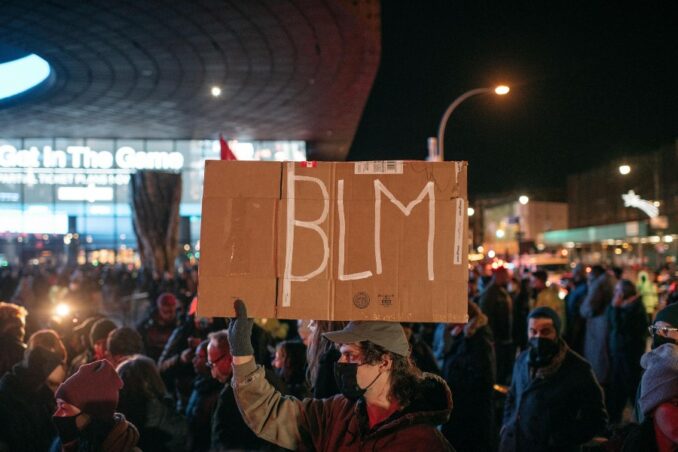 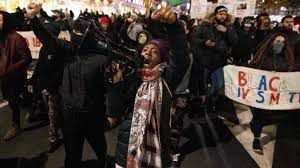 New York City Nov. 19, hundreds of marchers shut down the Brooklyn Bridge as they advanced into Manhattan in an evening protest. 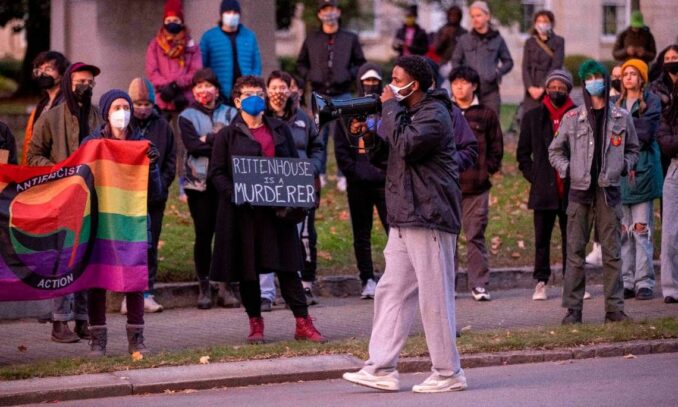 In Raleigh, North Carolina, a crowd of protesters grew to about 75 people on Saturday evening, with speakers leading chants of “No justice, no peace!” and “Abolish the police!” Passersby honked their car horns in support. One speaker said, “It doesn’t matter who’s in charge,” because the criminal justice system is “fundamentally flawed.” A social media meme called for protest: “Rittenhouse is a racist killer. People’s verdict: GUILTY!”

On the evening of Nov. 19 in Chicago, over 100 protesters marched from Federal Plaza demanding justice. The next day Rev. Jesse Jackson of the Rainbow Push Coalition denounced the verdict as a call for “open season by the violence of right-wing military.” (abc7chicago.com, Nov. 21) Over 1,000 people marched again through the downtown Loop. Organized by Black Lives Matter Chicago and other local activist groups, the marchers bore signs reading “Stop white supremacy” and “We’re hitting the streets to protest this racist injustice system.” 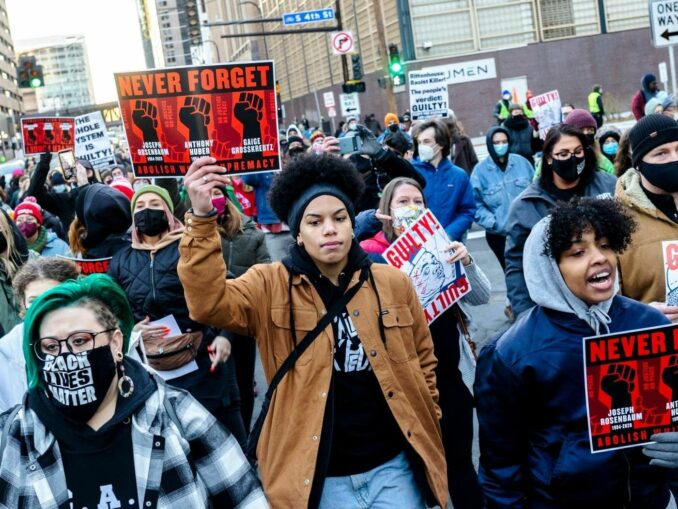 In Minneapolis Nov. 20, a crowd of hundreds, organized by Black Lives Matter Minnesota, rallied outside the Hennepin County Government Center and marched through downtown. People called for the abolition of white supremacy and denounced the racist U.S. legal system, including disproportionate incarceration rates for people of color. Some protesters carried signs with the names of the people Rittenhouse shot. 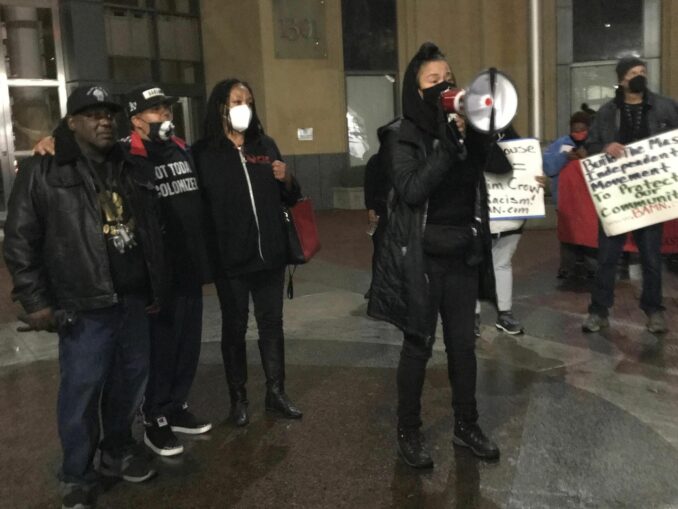 In downtown Oakland, California more than 100 people gathered at Oscar Grant Plaza at a Nov. 19 protest called by Peo Strike-Bay Area and several other organizations. After the crowd marched to the federal building, speakers delivered strong messages supporting the struggle for Black lives in Wisconsin and all over the country and advocating an end to mass incarceration at county jails and prisons. Demanding justice and an “end to white supremacy” were speakers from local organizations including the Anti Police-Terror Project, the Black Panther Cubs, CURYJ (Communities United for Restorative Youth Justice), All of Us or None, Malaya and Workers World Party.

Activists in San Diego gathered at Children’s Park downtown the evening of Nov. 19 to protest. By 8 p.m. over two dozen people, most of them dressed in black, bore witness against racism.

Within minutes after the verdict was announced, a message from the Coalition for Community Control Over the Police in Los Angeles called for protest: “Kyle walked. All out.” (patch.com, Nov. 19) 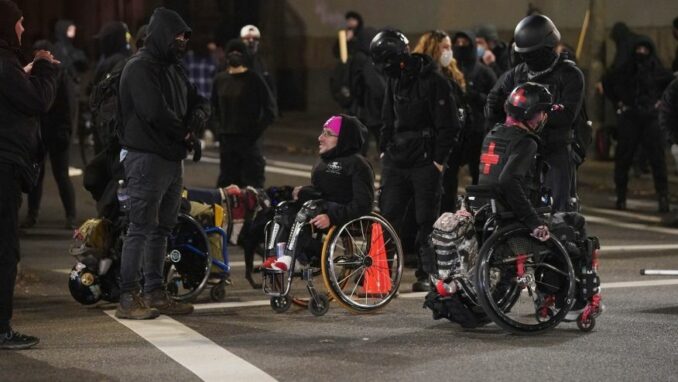 In Portland, Oregon, a crowd of 200 people assembled Friday night near the Multnomah County Justice Center to protest. Police declared the gathering a “riot” after one incident there and warned all present to leave or risk being met with force. In response demonstrators threw bottles and stones.

Judy Greenspan contributed to this article.