Nov. 18 press release from Movement Media has been slightly edited.

The militant mood of workers, whose increasing strikes and union drives are making headlines, erupted Nov. 11 during a union-busting, captive-audience meeting called by Amazon bosses at the company’s Staten Island facilities. 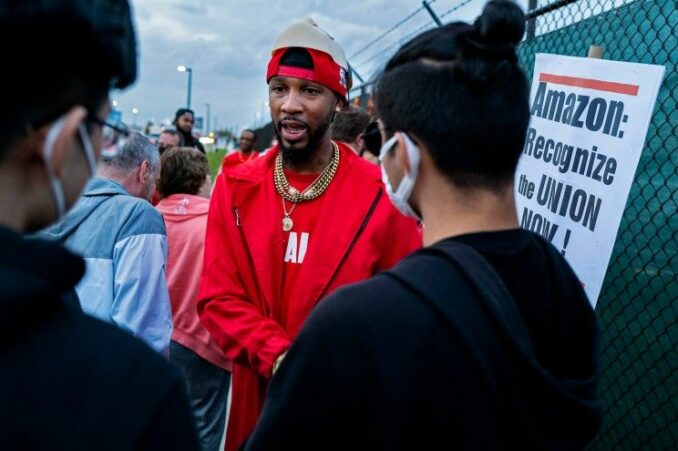 Chris Smalls, president of Amazon Labor Union, was one of the union organizers arrested outside an Amazon Staten Island facility, Nov. 15.

After workers dramatically challenged bosses at the meeting, Amazon responded by ramping up its anti-union tactics, getting two union leaders arrested on Nov. 15.

Workers are tired of accepting daily lies and abuse from bosses, and that was caught on tape. One worker, referring to the Amazon workforce 150% turnover rate, can be heard telling the bosses, “You have to start treating people better instead of turning them over at a rate that’s just insane.”

In addition to the punishing rate-based pace of work, workers brought up work-induced injuries, workers not being told about COVID exposures and a number of other pro-union challenges, before the managers abruptly ended the meeting.

ALU president Chris Smalls stated on Twitter, “After 7 months of campaigning outside Amazon with over 15 barbeques and weeks of having a fire pit for the cold nights, Amazon and its landowner lied to the NYPD to have me arrested.”

Online video shows ALU member Brett Daniels, an Amazon employee, cuffed by police. Daniels’ Twitter feed read, “Just got released from NYPD precinct 121,” where cops wouldn’t “tell me why I was being arrested.”

The arrests show why the ongoing dynamic union campaigns, like those at Amazon or Starbucks, need solidarity and support. Workers forming unions at six Starbucks stores in Buffalo, N.Y., are also facing every dirty union-busting tactic in the book.

“The workers are strong and fighting mad, but they can’t do it alone,” said activist Jay Zacarias, a member of WAAR (Workers Assembly Against Racism). “That’s why we’re having our next workers’ assembly at Jeff Bezos’ luxury penthouse on Black Friday.”