What are the United States’ foundational myths? Who created them, and who do they erase and harm? 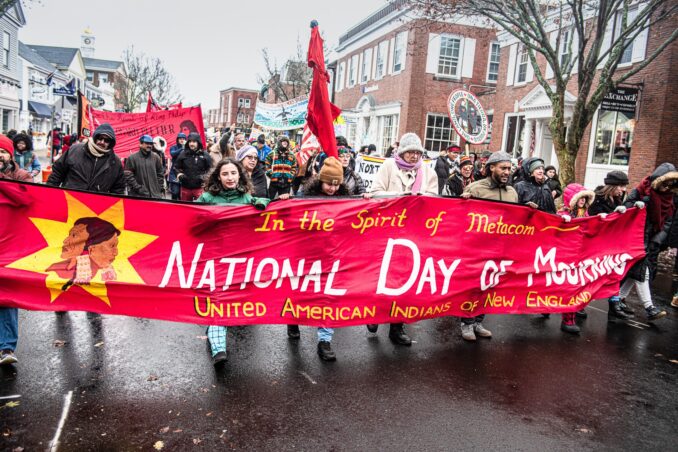 For the past 51 years, United American Indians of New England (UAINE) and supporters have gathered on so-called Thanksgiving Day in Plymouth, Massachusetts, to ask these questions, confront settler mythologies and commemorate a National Day of Mourning for the Indigenous people murdered by settler colonialism and imperialism worldwide.

In his speech, Wamsutta not only named atrocities committed by the Pilgrims, but also reflected upon the fate of the Wampanoag at the hands of settlers. The speech contained a powerful message of Native American pride. “Our spirit refuses to die,” wrote Wamsutta. “Yesterday we walked the woodland paths and sandy trails. Today we must walk the macadam highways and roads. We are uniting. . . . We stand tall and proud; and before too many moons pass, we’ll right the wrongs we have allowed to happen to us.”

The speech contained a revolutionary spirit, clearly inspired by the fledgling “Red Power Movement,” which demanded equal rights and self-determination for Native Americans. This without a doubt frightened the state officials, whose minds were likely drawn to the 1969 Occupation of Alcatraz, a 19-month-long protest involving Native Americans and supporters taking over the abandoned federal penitentiary on Alcatraz Island in California. The Occupation of Alcatraz was the first intertribal protest that garnered national attention, and it had struck fear into the hearts of the ruling class, because it was becoming clear that Native Americans, like African Americans and other oppressed peoples, were saying “no more.”

The flyer for this protest, which was circulated among Native people nationwide, read, “What do we have to be thankful for? The United American Indians of New England have declared Thanksgiving Day to be a National Day of Mourning for Native Americans.”

Members of the American Indian Movement (AIM), such as Russell Means and Dennis Banks, as well as Native people from all over the country, travelled to Plymouth, Massachusetts, for the very first National Day of Mourning. On Nov. 27, 1970, a crowd of around 200 Native Americans and supporters gathered on Cole’s Hill in Plymouth. Native American leaders made speeches about the deplorable conditions Native Americans faced, the genocidal actions of the United States government and the devastation caused by the Pilgrims.

The group next went down to the waterfront, where they buried Plymouth Rock in sand and painted it red. A small group of protesters made their way to the Mayflower II, a replica of the original Mayflower, and boarded the ship. They climbed the rigging and tore down the flag of Saint George, the patron saint of England. They also tossed a wax statue of the captain of the Mayflower, Christopher Jones, overboard along with the flag of Saint George.

One AIM leader would later say of the first National Day of Mourning that it “is a day American Indians won’t forget. We went to Plymouth for a purpose: to mourn since the landing of the Pilgrims the repression of the American Indian; and to indict the hypocrisy of a system which glorifies that repression. We fulfilled that purpose and gained a spirit of unity that spread across the land.” (“Russell Means Recounts NDOM, 1971.”) 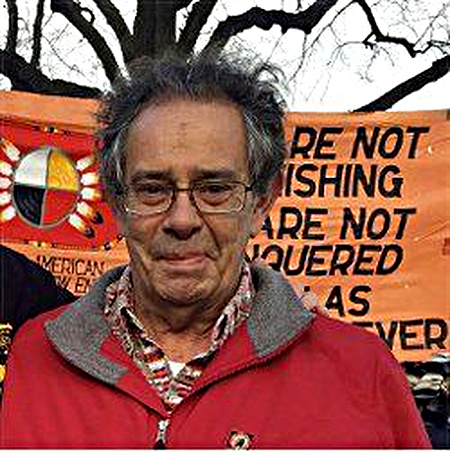 Protesters will gather on Cole’s Hill on Nov. 25 this year and will continue to do so into the future. As Moonanum James, son of Wamsutta Frank James and the late co-leader of UAINE, said to the crowd at the 2019 National Day of Mourning:

“We will continue to gather on this hill till corporations and the U.S. military stop polluting the Earth. Until we dismantle the brutal apparatus of mass incarceration. We will not stop until the oppression of our Two-Spirit siblings is a thing of the past. When the homeless have homes. When children are no longer taken from their parents and locked in cages. When the Palestinians reclaim the homeland and the autonomy Israel has denied them for the past 70 years. When no person goes hungry or is left to die, because they have little or no access to quality health care. When insulin is free. When union busting is a thing of the past. Until then, the struggle will continue.”