The following are excerpts from a Nov. 9 press release from kawsachunnews.com.

On Nov. 9, Canadian and U.S. representatives held a press conference in Managua, Nicaragua, on what they saw on election day, Nov. 7. Over 165 international representatives and 67 journalists from 27 countries visited over 100 election centers throughout the country. 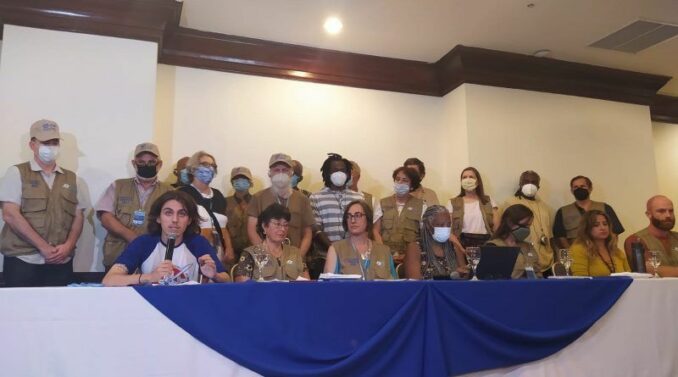 They reported that the election was free and fair and clearly represented the desires of the Nicaraguan people. They addressed several aspects of the democratic process including the process to form political parties, free speech and how the ballots and votes were secured.

While the Biden administration has labeled the election a “sham,” the delegates’ observations contradict these accusations. They observed an election that was efficient, transparent, with widespread turnout and participation of six opposition parties, including two that last headed the government.

The turnout was high in all areas, especially in the morning, and yet the lines moved very quickly. In one of the busier times and places, it took about eight minutes from arrival through electronic check-in and checking of picture ID, to a second check of ID at the designated polling place, sign-in on paper, voting by secret ballot and finally having their thumb inked. Nicaragua inks each voter’s thumb, among many other checks to prevent duplicate voting.

A group of 11 people visited Bilwi on the Caribbean coast. Voters told them of the way the government saved lives during the two category 4 and 5 hurricanes last year. The government quickly restored power, helped restore and rebuild homes. The schools where the voting took place were in good condition, some buildings newly rebuilt.

Before the FSLN government they had one kilometer [0.62 miles] of paved road. Now they have 500 kilometers of paved road; and when another 70 kilometers are completed, it will be possible to drive all the way to Managua. The incumbent FSLN party received its highest percentage vote in this region, an amazing 86.7%.

Josh Higginbotham from Oklahoma spoke about the profound contrast between the status of sovereign Indigenous peoples in his home state and those in Nicaragua’s autonomous regions, where over 30% of the landmass once held by Nicaragua has been ceded back to the Afrodescendientes [Afro-descendant] and other Indigenous communities, and their autonomy is respected.

The results of the election reflect the intentions of the Nicaraguan people, the international witnesses reported. The process was extremely secure, much more secure than in the U.S. There is absolutely no way anyone could alter ballots or miscount them, because every ballot box is secured at all times under the watch of several people from different political parties.

The results reported by the government are highly verifiable, as votes on paper ballots in every voting center can be followed through the counting and tabulation with a secure chain of custody through each level of government — voting center, municipality, region and nation.

The group demanded that the U.S. and Canadian governments recognize the results of the democratic elections in Nicaragua and end economic sanctions.