Cleveland voters made history Nov. 2 when they approved Issue 24, which creates a permanent community review board to oversee police conduct. Nearly 60% voted in favor citywide, with larger percentages on Cleveland’s East Side, the historic base of the African American community. 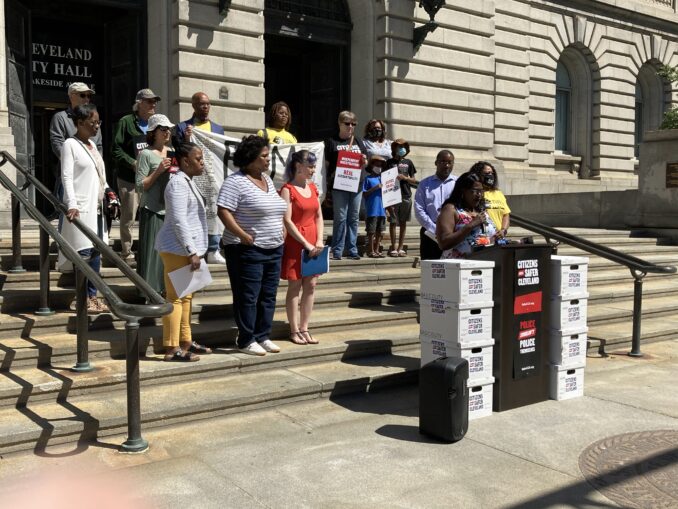 Citizens for a Safer Cleveland delivers ballot petitions for a permanent police review board, June 16 as Angela Kirkman, whose son Angelo Miller was killed by Cleveland cops, speaks outside City Hall.

In 2015, a federal Department of Justice investigation into police misconduct, particularly excessive use of lethal and nonlethal force, resulted in a consent decree mandating a set of reforms. However, the consent decree expired in 2020 and the current Community Police Commission is not a permanent body.

Issue 24 creates a permanent body tasked with keeping residents safe from violent, racist cops. It supports termination of officers for “conduct (including slurs or other language) that is racist, sexist, anti-LGBTQ+, anti-immigrant, national-origin-based, or that is otherwise bigoted and used in the course and scope of employment, and/or is considered a matter of public concern.” The grassroots campaign, organized by Citizens for a Safer Cleveland (SaferCLE), was led by Black women who lost loved ones to police brutality.

Mayoral candidate Kevin Kelley ran a racist campaign against the progressive ballot measure, with a television ad featuring a group of white voters chanting “No on Issue 24.” Kelley’s African American opponent Justin Bibb, who supported the issue and signed a pledge not to accept an endorsement from the Cleveland Police Patrolmen’s Association, defeated Kelley with 63% of the vote.

Michael Polensek, longtime incumbent City Council member in Ward 8, ran a hostile campaign against his first-time challenger and Black Lives Matter Cleveland organizer Aisia Jones — along with candidates outside his ward — denouncing their “progressive agenda” of “defunding the police” in letters to voters. He based these allegations on the candidates’ support of Issue 24.

Council member Polensek attacked Jones for being a renter in a recently redrawn ward where a majority of residents are renters. He even publicized Jones’ street address, threatening the safety of herself, her spouse and her two young sons. Polensek, in office since 1977, was charged with anti-Semitism for suggesting that Ward 12 candidate Rebecca Maurer, a progressive attorney who is Jewish, was pulling the strings in all of the progressive Council campaigns.

Vastly outspent and lacking name recognition, Jones lost this election. But she told Workers World, “I ran a solid grassroots campaign focused on issues and solutions. My campaign was truly people-powered; I started a movement in Ward 8.

“I felt like a winner when I realized Issue 24 passed. I worked a lot behind the scenes on that. I’m so honored to have openly supported the work of the families represented with SaferCLE. Cleveland is one of the few cities that has police accountability! I’m proud of that; for me, as an activist, that’s a major victory! The work continues.”

Four out of five Detroit voters approved Proposal R to create a Reparations Task Force to address the harm inflicted on city residents by systemic racism. Although Proposal R does not have a funding mechanism, the task force can recommend programs, such as for housing and economic development, to rectify the damage done by centuries of oppression. About 77% of Detroit residents are Black.

This continues the efforts of Detroit’s late Rep. John Conyers, who for years brought the just demand for reparations to the halls of Congress. Cities which have adopted similar measures include Asheville, N.C.; Evanston, Ill.; St. Paul, Minn., and Providence, R.I.

Three Detroit suburbs with large Arab and Muslim communities elected their first mayors from those constituencies. Dearborn Mayor-elect Abdullah Hammoud and Dearborn Heights Mayor-elect Bill Bazzi are Lebanese; Hamtramck Mayor-elect Amer Ghalib is Yemeni. This follows the historic election of Rep. Rashida Tlaib, the first Palestinian and one of the first two Muslim women to be elected to Congress. Other suburbs elected Black, Asian and Latinx candidates for mayor and City Council for the first time.

In Minneapolis, where the police lynching of George Floyd took place May 25, 2020, the language in Question 2 was stronger than Cleveland’s Issue 24. Had it passed it would have replaced the Minneapolis Police Department with a Department of Public Safety under the direction of a DPS Commissioner appointed by the mayor and eliminated language mandating minimum funding for the police. But the measure still garnered 44% of voter support in a city almost 64% white.

Under capitalism, the electoral process is not designed to bring about fundamental and meaningful change, but elections are an instrument in the struggle and a barometer of mass sentiment. These election results in the Rust Belt follow the 2020 Black Lives Matter upsurge and they occur as the working class is exercising its power at the point of production. They are a harbinger of things to come.

Martha Grevatt is a resident of Cleveland Ward 8.