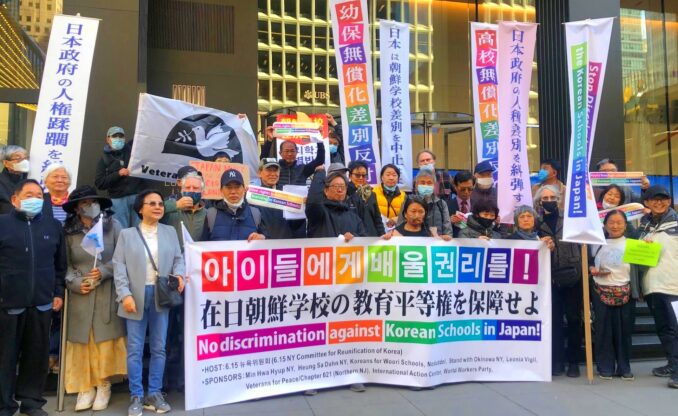 A demonstration in front of the Japanese Consulate in New York City on Oct. 28, with drums, chants and tall banners in Korean and Japanese drew attention to the continued discrimination against the oppressed Korean nationality living within Japan.

Koreans were brought to imperial Japan as conscripted workers for the most dangerous jobs prior to World War II. They were literally enslaved labor. Hundreds of thousands of Korean and other Asian women were brought to Japanese military brothels for sexual slavery during the Asia Pacific War.

Under the decades of U.S. occupation since the end of World War II, the same oppressive class relations were maintained. The Korean people who remained in Japan after the war, due to the U.S. war in Korea and the blockade of North Korea, are still — three and four generations later — denied the full citizenship rights of others living in Japan.

In Japan, as in every one of the imperialist G7 countries today, oppressed nationalities do not have equal rights in education, housing or employment.

To maintain their national identity, language and culture, the oppressed Korean community at their own expense built and maintained a series of kindergartens, grade schools and high schools. The pressing need for computers and more modern technology makes this an increasingly difficult burden. Education is free and subsidized for all others in Japan, including education in several other languages, but not for Korean schools.

The demonstration condemned these racist policies and violations of the Universal Declaration of Human Rights. It was organized by the 6-15 NY Committee for the Reunification of Korea and drew support from a number of antiwar and peace organizations.