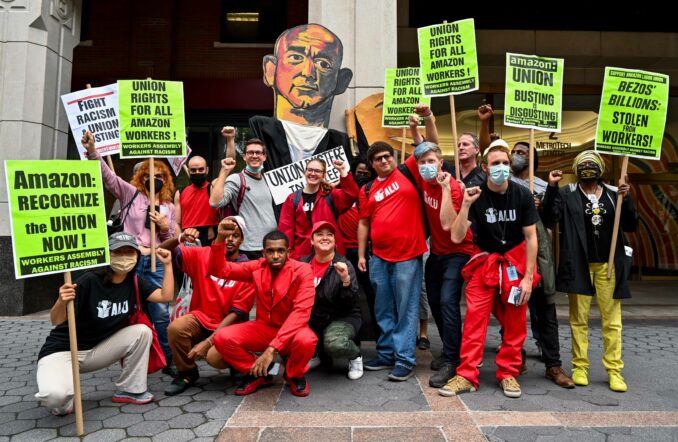 The ALU has successfully built a workers’ committee and signed up over 2,000 workers. Amazon whistleblower Chris Smalls said at an earlier news conference, as he announced the planned filing with the Region 29 Brooklyn NLRB office, “On Sunday, October 17, 2021, members of the committee democratically ratified our constitution and elected me as president of the ALU.”

Smalls continued, “Since the campaign has launched, Amazon didn’t waste any time to begin union busting. “We have endured the same antics seen in Bessemer, Alabama, from signs in the bathrooms to the same firm that was hired: T.B.G. The Burke Group was hired by Amazon to walk around the buildings creating doubt amongst the workers.”

Regardless of Amazon’s anti-union attempts, ALU has earned the trust of the workers, hosting a number of barbecues, as well as handing out food and cold water along with masks and T-shirts daily. Amazon refuses to acknowledge ALU as a current worker-led collective, instead sending out false messaging telling workers they will lose their voices and wages.

Smalls said, “We are proud to be joined by our comrades and several community organizations from the NYC metropolitan area to help support the efforts of the ALU. Workers are demanding Amazon stop their union-busting practices and allow workers to use their rights to organize toward collective bargaining without interference.” 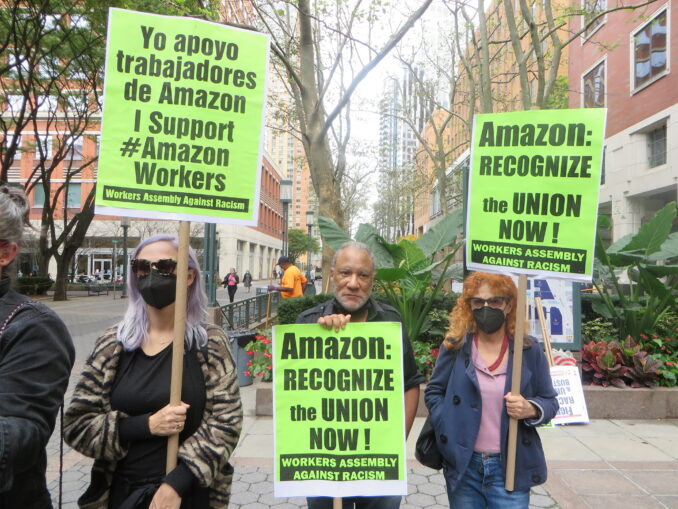 The ALU president explained, “ALU has put together a list of demands which we have full intentions to fight for as a bonafide union. We intend to fight for higher wages, job security, safer working conditions, more paid time off, better medical leave options and longer breaks. We also want to fight to bring back monthly VCP [variable compensation pay] bonuses for attendance and productivity and for becoming shareholders again upon employment with the company on Day 1. Both ended in 2018.”

This day was over a year in the making. The devastating impact of COVID on workers and the lack of basic safety on the job at Amazon facilities and Amazon-owned Whole Foods stores led to walkouts and job actions at multiple locations in the spring of 2020. Chris Smalls was fired March 30, 2020, after leading a walkout at the Amazon JFK8 warehouse.

The unsafe COVID conditions, combined with the general brutal working conditions that leave workers exhausted and lead to frequent injuries, made it imperative to unionize the company. In April of this year, Smalls and other current and fired workers at JFK8 formed the Amazon Labor Union.

That same month the National Labor Relations Board announced the results of a union representation election at Amazon’s Bessemer, Ala., facility. The Retail, Wholesale and Department Store Union had lost the election by a wide margin. The union appealed to the NLRB, filing multiple Unfair Labor Practice charges over the company’s outlandish union-busting tactics. For weeks workers testified at a hearing by the NLRB, describing threats, intimidation and ever-present anti-union propaganda.

The NLRB ruled in the RWDSU’s favor. Another union election at the Bessemer facility is possible.

Although they lost the election, the courage of the mostly-Black Alabama workers has sparked interest among multiple unions to unionize Amazon — and not just one warehouse at a time. At their convention in June, the Teamsters union passed a resolution to “Build Worker Power at Amazon.” As Randy Korgan, Teamsters National Director for Amazon said, “Amazon presents a massive threat to working-class communities and good jobs in the logistics industry.”

In other countries, where Amazon workers do have unions, there have been militant strikes.

The ALU members in Staten Island have taken a big step forward for worker justice at Amazon.

Parts of this article are taken from a news release issued by WAAR. For more information, see amazonlaborunion.org, Twitter: @Shut_downAmazon