Why has David Card been co-awarded the 2021 Nobel Prize in Economic Sciences?

Card, who teaches at UC Berkeley, did his research in the 1990s. The Committee obviously feels his research had major policy implications. (The research of the two other winners is more technical.) Hundreds of newspapers, web sites and other media reported on this award. 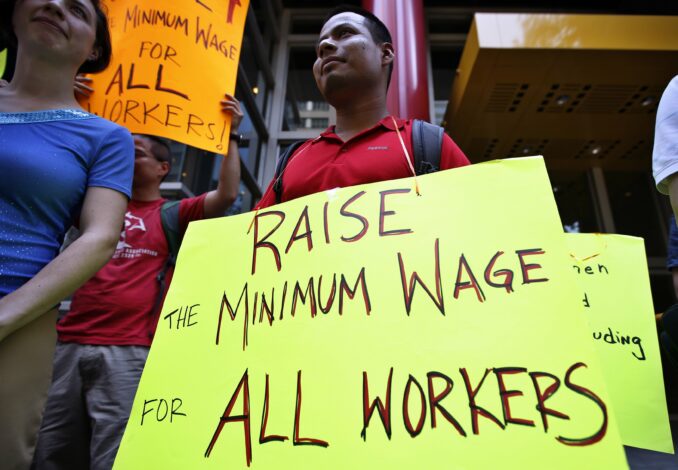 Outside the office of former New York Gov. Andrew Cuomo, May 2013.

The world economy is today in a major, pandemic-linked recession. Back in the 1930s, after five years of deep recession, workers in the United States, under the 1935 Wagner Act, won an undisputed right to organize unions and bargain collectively. That same year, Social Security was established, which included unemployment compensation programs, run by the states. Three years later, a nationwide minimum wage was created.

In 1981, President Ronald Reagan’s smashing of the union representing air-traffic controllers (PATCO) marked a nationwide decision by the U.S. ruling class to adopt a harsher, more confrontational approach to unions and the needs of working people. Union membership dropped sharply during Reagan’s eight years. It is now barely 10 percent of the private labor force.

While politicians don’t need professional economists to agree with their attacks on unions and the workers they represent, their assertion that raising the minimum wage reduces employment provides a lot of cover for refusing to raise wages.

A survey of academic economists in 1979 found that 90 percent agreed, generally, that “A minimum wage increases unemployment among young and unskilled workers.” But by 2015, only 26 percent of professional economists agreed.

David Card wrote a series of papers in the 1990s with Alan Krueger, now deceased, that compared New Jersey, which had raised its minimum wage, with Pennsylvania, which hadn’t. They used Pennsylvania as a control group (like the group which receives a placebo in a test of a new vaccine) for New Jersey (the group which got the real vaccine).

The increased minimum wage had very little if any negative effect on the number of jobs.

The Institute on Labor and Employment at Berkeley extended this research to multiple states over the years between 1990 and 2006. These days some economists believe raising the minimum wage actually increases jobs.

It is clear, looking at David Card’s research, that the Nobel Committee agreed that disregarding it and continuing to restrict unemployment compensation would hurt the world’s economic recovery.

Of course, what would really cause the world’s economy to blossom would be doing away with the whole hierarchy of wages and rewards, along with the capitalist system on which it’s built.