Following the armed attack by the Lebanese Forces militia on Hezbollah and its allies at a demonstration in Beirut Oct. 14 and the subsequent firefight, Workers World correspondent Ted Kelly interviewed Johnny Achi, coordinator of Arab Americans for Syria. Below are excerpts from Achi’s remarks. 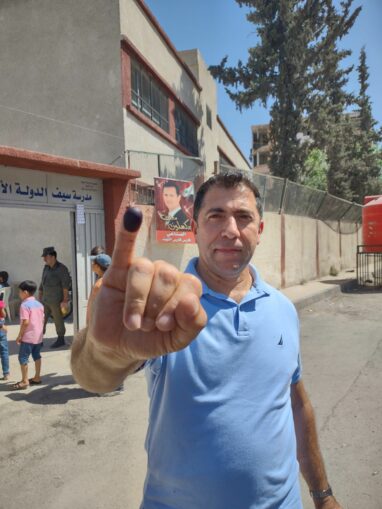 What Syria fought ten years for was to evade “Lebanonizing” Syria. What do I mean by Lebanonizing a nation? That is the condition, when [the U.S.] talks about demanding “progress in the political process.” Syria refuses to agree to Lebanonizing. Iraq, by the way, did agree.

Under the U.S. occupation, Iraq got Lebanonized. And now Iraq does not enjoy freedom, Iraq does not join the fight against the Zionist state. Because the U.S. has got them to believe now that the president has to be a Kurd, that the prime minister has to be Sunni, that the head of parliament has to be Shia. The U.S. divided them, without really dividing them. They forced them to accept this division, which is what Lebanon accepted years ago.

They’ll never be free under these conditions because they’re always fighting among themselves. That’s what the divide-and-conquer strategy is used for.

Syrians were presented, on paper, with a process to create a system based on ethnicities, on sectarian and religious grounds. This will never, ever happen in Syria. If we have to lose Syria as we know it, we will never agree to this U.S.-imposed condition.

That’s what Lebanon is living today, a sectarian divide. And these elements, the Christian militias of Lebanese Forces leader Samir Geaga, they are the arm of Israel in Lebanon. They will always instigate a fight with Hezbollah, which has been so incredibly patient. Every time that Iran or Hezbollah or Syria has a victory, Israel will retaliate through its dirty allies in Lebanon – through Samir Geaga.

The guy is not strong, believe me, but he receives billions of dollars from Saudi Arabia and is CIA-backed. He knows they have his back. He’s nobody on the ground. He doesn’t even represent one fourth of the Christian voices, and he’s losing ground even there. This is a dirty militia that has no shame, who go out on the top of buildings and snipe at civilians. They killed six people yesterday [Oct. 14].

Lebanese people went out on the streets to protest the “freedom and democracy” the U.S. wanted them to do. They had no weapons, were in civilian clothing, standing out front of a court. They said, “Don’t politicize the investigation of the 2020 Port of Beirut explosion [that killed 200 people].” For that the Lebanese Forces snipers fired on them.

These killers will be caught but they unfortunately will not be brought to justice. Because they want to draw Hezbollah into an internal fight, just like they want to push Syria to retaliate against the Jewish state.

We will not be brought into a fight that is not of our own choosing. They should know that our patience is too strong. Our diplomacy is stronger than the world will ever know. Innocent lives should not be lost just to gain some political ground. The armed clash was very unfortunate. But it will not lead to civil war.

Hezbollah knows there is one enemy and the enemy is south of us [in Israel]. This is where the fight is, if we’re going to carry on a fight.

That’s why the Axis of Resistance is coming back, because we will not be brought into a fight that is not of our own choosing.