Before the month is half over, October 2021 already has a nickname: #Striketober! 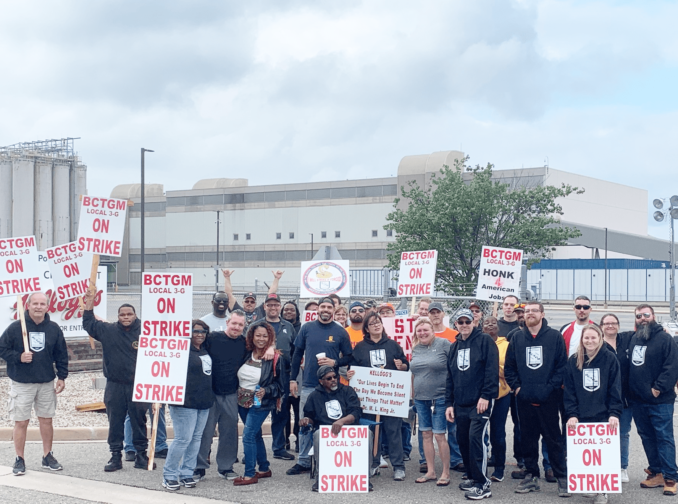 Kellogg workers have been on strike since Oct. 5.

On Oct. 5, 1,400 workers at four Kellogg’s cereal plants went on strike to block the company’s concessionary demands. They are members of Bakery, Confectionery, Tobacco Workers and Grain Millers (BCTGM), which recently struck Frito Lay and Nabisco. That adds up to strikes at three Fortune 500 companies, involving thousands of workers, by a union with under 65,000 members.

Kellogg’s wants to cut health care benefits, pensions, holiday and vacation pay, cost of living raises and union jobs — and, adding insult to injury, take the union label off cereal boxes. The company wants a two-tier system whereby future workers will pay more for health care and will not collect a pension when they retire. 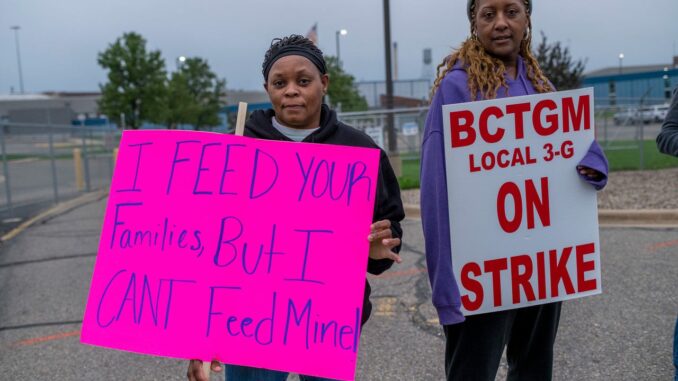 As the union explains, “A two-tier system is a devious way for employers to slowly, but surely, take power from union members, their contract and their union. The company is trying to divide the workforce by asking the current workforce to sell out the next generation of Kellogg workers.” (bctgm.org) These workers have put in long hours of hard work throughout the pandemic.

That a small union would take on Kellogg’s and two other Fortune 500 companies in a few months’ time is indicative of a new mood of militancy in the working class.

Health care workers are on the move. More than two dozen California hospitals have experienced strikes and 24,000 members of United Nurses Associations of California/Union of Health Care Professionals have overwhelmingly approved a statewide strike against Kaiser Permanente. Nurses in Worcester, Mass. — on strike at St. Vincent Hospital – have been out since March 8. In Buffalo, N.Y., 2,000 health care workers followed suit at Mercy Hospital on Oct. 1.

Alabama coal miners have been on strike since April 1 against Warrior Met — and, indirectly, against major Wall Street stockholder BlackRock, the world’s largest investment firm. Metalworkers struck two factories in Cabell County, West Virginia; over 400 are still out at Special Metals. 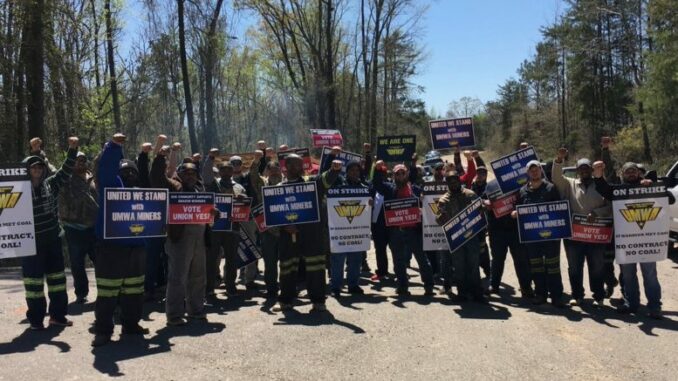 Warrior Met coal strike, begun in April, is still on.

Another 10,000 workers began a strike Oct. 14 against John Deere, hitting 14 plants in Iowa, Illinois, Kansas, Colorado and Georgia. This strike is the first in 35 years against the agricultural and construction equipment company. Over 90 percent of United Auto Workers members at Deere rejected the first contract presented to them. 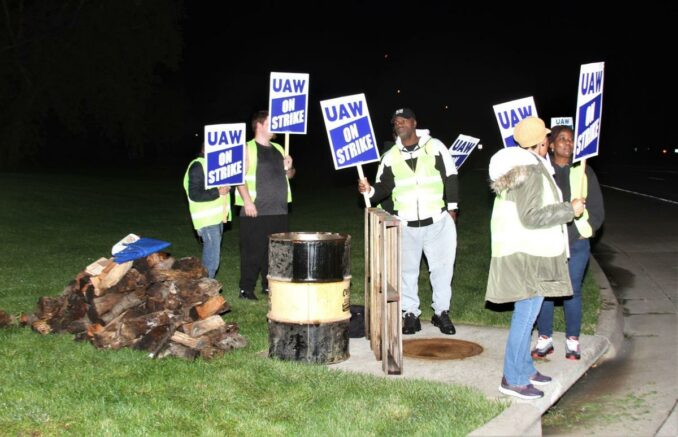 The media emphasize the company’s offer of 5 to 6 percent raises. But in a six-year contract, this amounts to 1 percent or less per year, while annual inflation is running at 5 percent. The two-tier pay scheme in place since 1997 — still paying “post-1997” workers substantially less — remains intact. Now Deere wants a third tier with future workers ineligible for pensions.

This same company is poised to make nearly $6 billion in profits this year — an all-time record.

The rank and file aren’t having it. Two strikers, speaking on a zoom call with rank-and-file UAW activists, complained of “disrespectful” management and the mistreatment of workers deemed “critically essential” because they manufacture farm equipment. Community support has been “overwhelming.” 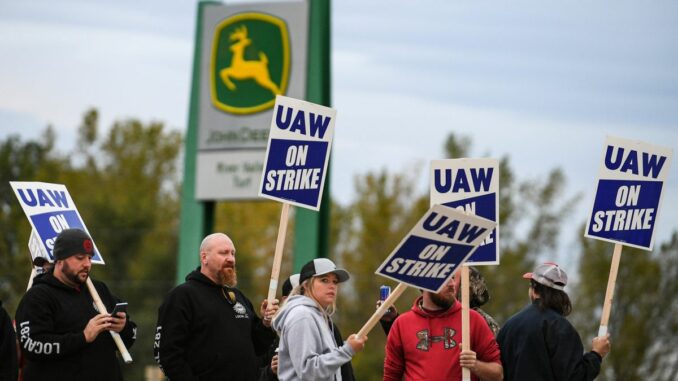 In a tight labor market this year, Deere employees have logged hours of mandatory overtime. From a strike standpoint this means two things: one, workers are angry; two, many workers have savings and can withstand the hardships of a long strike. 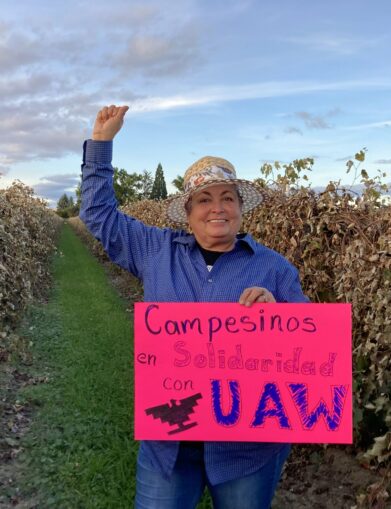 The difficulty finding workers may have been a factor in recent negotiations between the film and television industry and the International Association of Theatre and Stage Employees. Some 60,000 IATSE members were set to begin a countrywide strike Oct. 18, lifting the total number of current strikers to over 100,000.

Members are now voting on a new contract with the Alliance of Motion Picture and Television Producers. The union says, “We went toe to toe with some of the richest and most powerful entertainment and tech companies in the world, and we have now reached an agreement with the AMPTP that meets our members’ needs.”

There could still be a strike, which would bring Hollywood production to a halt if the workers vote no. Many are concerned that the issue of breaks between work shifts is not adequately addressed.

Many actions of unorganized workers — often atomized or with only a handful of coworkers — are still of an individual character. Millions of workers have been leaving their jobs, a record 4.3 million in August. The lowest-paying jobs are seeing the highest number of quits.

But organized group quits are becoming a trend. From fast food restaurants to dollar stores to trendy microbreweries, workers are leaving their jobs together and posting signs saying the place is closed because “we all quit.”

Other workers are using their power at the point of production to demand changes — not only in compensation and working conditions but in corporate policy. Amazon white-collar workers have walked out over the company’s contribution to the climate catastrophe. McDonald’s workers have stopped work to protest sexual harassment. Transgender workers at Netflix are threatening a walkout over the continued streaming of an anti-trans comedy special.

In a groundbreaking development, the Amazon Labor Union at the company’s JFK8 facility in Staten Island, N.Y., announced plans to file for a union representation election with the National Labor Relations Board. A number of unions, including the Teamsters, are planning a huge unionization drive at Amazon.

The power of the working class to resist capital is amplified in a tight labor market. But capitalism has faced a generalized systemic crisis for decades. At a dead end, it is driven to squeeze as much productivity from workers as possible and at the same time cut labor costs to the bone. If companies are paying higher wages, they are getting it back, and then some, by making workers work harder and longer.

How can our side win?

The current uptick in strike activity and workplace resistance reflects the sharpening of class antagonisms.

The big question is, how can the workers tip the scales in their favor?

A popular slogan on picket lines is “One day longer, one day stronger!” This expresses the determination of the strikers to hold out as long as it takes to win their demands. But as a strategy, it has been proven inadequate against an aggressive capitalist class determined to maximize exploitation with a heavily militarized state at its disposal.

Too often, striking unions obey a court injunction limiting the number of pickets and strikebreakers who are able to cross the picket line. Workers eventually go back to work with a weak contract — or, worst case scenario, they are permanently replaced. The fraction of unionized U.S. workers has hovered around 10 percent, even though polls show workers favor unions by a substantial margin.

It will take a broad, global, class-wide movement to turn the tide in labor’s favor, for both organized and unorganized workers.

As Workers World Party First Secretary Larry Holmes explains: “From a genuine Marxist perspective, as the changes in the productive forces bring more workers across the planet into contact with each other, class-wide solidarity becomes not only more practically possible, it also becomes more necessary. Indeed, without greater political and strategic solidarity, the capitalist ruling class will use technology and globalization to isolate and atomize the working class.

“It is in this context that we should understand the importance of mass working class solidarity, which means workers who are not directly affected by a particular struggle, organizing themselves to support other workers anywhere and everywhere who are at the center of a particular struggle, be that struggle small and local, large and global.”