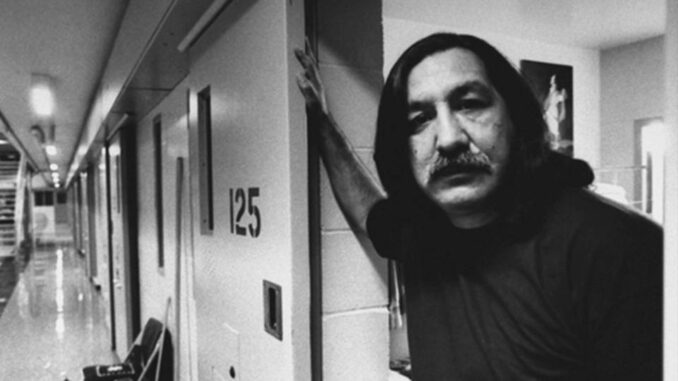 During the era of colonial theft and conquest, North America became a proving ground for European imperialists. This was where strategies of biological warfare and genocide were honed, as well as the industry that has become a pillar of modern global capitalism: mass incarceration.

One cannot talk about the struggle of Indigenous peoples and nations against settler colonialism without talking about the struggle for prison abolition. “Indian Removal” relied on the establishment of mass internment camps, “emigration depots” and prisons.

U.S. prisons have been and are concentration camps for the poor and oppressed. One certain function of this imprisonment is to prevent colonized peoples from fighting for their national self-determination — the right of any group of people to practice their own culture, customs, language and self-governance on their own lands.

In 1838, despite strong and coordinated resistance, 15,000 Cherokee people were violently displaced at the point of a bayonet by white settler militias and the U.S. military, an atrocity known as the Trail of Tears. But a plan to commit genocide on the Native inhabitants of the continent had been underway long before President Andrew Jackson took office, before even the establishment of the U.S. government as it exists today.

In 1780 the Virginia colony’s 37-year-old governor Thomas Jefferson wrote, “If we are to wage a campaign against these Indians, the end proposed should be their extermination or their removal beyond the lakes of the Illinois River.” (tinyurl.com/fnccanc2)

George Washington himself came from a long line of violent racist colonizers. His great-grandfather John Washington was called “Hanadahguyus,” an Iroquois word meaning “Town Destroyer,” because he massacred Native people. The future president and commander of U.S. armies inherited his bloodstained title, along with tobacco plantations on stolen land and hundreds of enslaved African workers.

Imperialists didn’t holster the weapons of mass incarceration and displacement after forcing Native nations of North America onto reservation lands. Children were kidnapped and taken to boarding schools, where they were subjected to terrible abuse by their jailers. This further disrupted the social cohesion of Indigenous societies, by preventing children from speaking their own languages and practicing their own cultures.

The Canadian government now admits that the bodies of at least 5,000 children have been discovered in mass graves on the sites of “residential schools” — that country’s name for these juvenile prisons. While the grim revelations of crimes committed against First Nations in Canada are far from over, no such process on that scale has taken place in the U.S.

But it is beyond doubt that the phenomenon of “kids in cages” did not begin — nor end — under the presidency of Donald J. Trump.

Jakelin Caal, a seven-year-old Qʼeqchiʼ child, and an eight-year-old Chuj child, Felipe Gómez Alonso, both from Guatemala, died within weeks of each other in December 2018, while in the custody of U.S. Customs and Border Protection. Many of the thousands of migrants who seek asylum on the U.S. border today are members of Indigenous nations, who speak many different and unrelated Native languages, and research shows they are less likely to receive medical care than Spanish-speaking refugees. (tinyurl.com/3v25n3mh)

Prisons are used to eliminate the leaders of Indigenous resistance. Sitting Bull, the great 19th century Hunkpapa Lakota leader, was a U.S. political prisoner from 1881 to 1883 and was assassinated in 1890 during an attempt to rearrest him. The Oglala Lakota freedom fighter Crazy Horse was murdered by his jailers in 1877 at a concentration camp in what is now Nebraska. Chiricahua Apache resistance leader Geronimo died as a prisoner of war at Fort Sill, Okla., in 1909.

This history is why it is so crucial that revolutionaries and people of conscience join the movement to free Leonard Peltier, a member of the Turtle Mountain Chippewa also of Lakota and Dakota heritage, who has been incarcerated by the U.S. since 1975. Peltier, an American Indian Movement member, is one of the most well-known Native political prisoners from the period of militant struggle in the 1970s.

As we fight to support this generation’s political prisoners, like the #NoDAPL Water Protectors Red Fawn Fallis, Michael “Rattler” Markus, Michael “Little Feather” Giron and Dion Ortiz, we must fight to make sure no prisoners of war are left in custody to have their fates decided by their imperialist captors.

Peltier wrote in 2018, before the COVID pandemic ravaged the incarcerated population in this country and before he underwent heart surgery, “It doesn’t seem as if any changes for the good or safety of Mother Earth will happen soon. But the good-hearted people are fighting back, and some good people are winning in the struggles to beat back some of this evil and to make the Changes, the safety networks, we need for our grandchildren and great-grandchildren so that they will be able to live happy, successful lives, at least decent lives, that most of the poor underprivileged in my generation never got to experience or enjoy in [their] short lives.” (Workers World, Dec. 3)

The International Leonard Peltier Defense Committee is urgently requesting donations to support his campaign for freedom at the ILPDC Facebook Page (facebook.com/PeltierHQ/) and the fundraising site (tinyurl.com/yxtkb77a).

This is still the year to free Leonard Peltier!