The annual Philly Trans March kicked off with a short rally in Washington Park near Philadelphia’s historic district on Oct. 9. A two-hour energetic and militant march around the area followed, returning to the park for a final rally. Many of the nearly 300 participants were trans youth of color. 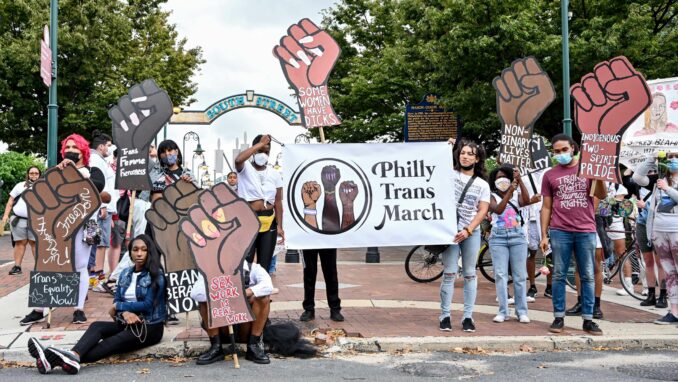 The event began with inviting Indigenous trans participants to come to the stage, where one gave opening remarks. Organizers acknowledged the City of Philadelphia was built on the stolen land of the Lenni Lenape people. Some of the large, clenched fist signs carried by participants included the words “Indigenous, Two Spirit pride.”

All the speakers were people of color. The march was led by Black trans youth on the microphone, and Black trans and other participants were asked to come to the front to lead the march. As demonstrators marched down heavily gentrified South Street and through some of the city’s wealthier neighborhoods, they chanted: “Liar, liar, gentrifier” and “Liar, liar, colonizer.”

The response from people on South Street was mostly friendly, with some stopping to listen to speakers when the march stopped at different intersections for a prolonged time. During one stop, a speaker addressed requests made by some white organizers that the event be “family friendly,” by explaining that “A real trans march cannot be family friendly, since the racism, chattel slavery and murders that impact the trans community are not family friendly.” 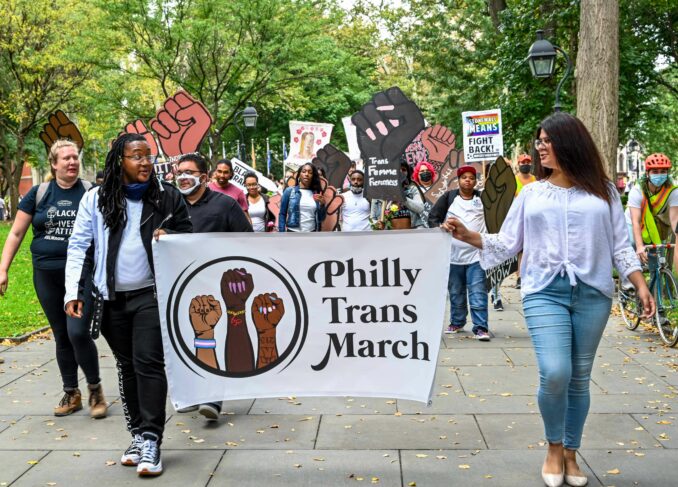 Since 2010, Philly Trans March has held annual protests against the hate, social injustice and inequality faced by trans, nonbinary and gender-nonconforming individuals and communities. Several speakers addressed how oppression has impoverished many trans people — particularly those of color and the elderly. Appeals were made to support low-to-no income members of the community, while signs with their Cash App accounts were circulated through the crowd.

March organizers distributed a flyer noting the broad diversity of the trans community and the Philly Trans March. “We are an all ages, unified, community group that supports no policing, sex workers, formerly and currently incarcerated folks, those that are houseless, disabled, undocumented, little to no income, and any other historically and traditionally excluded and silenced member of our community,” it read.

Speakers raised demands Philly Trans March has generated over the years   including: “the abolition of prisons and police; protection for people impacted by ever-growing rates of deportation, policing, separation from families and detention while seeking asylum; and the end of various forms of harassment, assaults and murders that affect us every day.”

Other demands spelled out the need for economic justice: “investment in transformative justice infrastructures; the building of Black trans leadership and compensation; safety and affirmation for trans students; protection and better resources for trans elders; and reparations to be given to Black and Indigenous trans people.”

Rally organizers called on white activists to be “accomplices” not just “allies,” urging them to become active participants in anti-racism work and to not remain silent when they witness discrimination in their communities or work spaces.