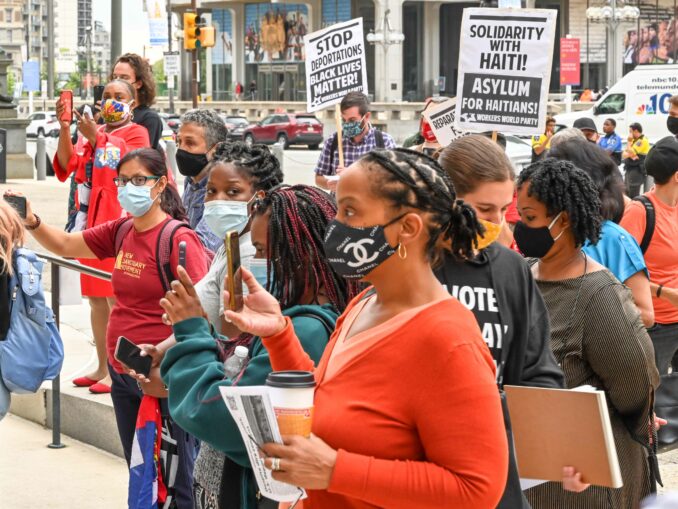 As the solidarity rally in Philadelphia with Haitian refugees began to gather Sept. 28, around 75 participants were greeted by steady beats of recorded Haitian music accompanied by a live drummer.

There was a large banner taped to the wall of City Hall, reading “Haitian stories of truth, experience and memories.” People were encouraged to write messages on the banner if they had lost a loved one in Haiti due to the recent earthquake, political violence or someone trying to cross the U.S. border.

Rally chair Marline Say opened by recognizing that “We are standing on the land of the Lenape people, the original inhabitants of land taken over by European colonialists. So, let’s be clear, no one is illegal on stolen land!” She led a chant of “Reparations, not deportations.”

Haitian activist Steve Paul, standing next to a full-size cardboard cutout of President Joe Biden, recounted a history of French and U.S. colonial and imperialist occupation of Haiti, the first country in the Western Hemisphere to overthrow slavery.

Mercedes Piquion and other speakers read statements from Haitian migrants, including many who came to the U.S. decades earlier following natural disasters and political unrest. Protected by the Temporary Protected Status program, they now face the threat of deportation.

There was broad support from groups involved in the fight to “Shut down Berks,” an Immigrations and Custom Enforcement facility in nearby Berks County. Several Philadelphia Democratic City Council people spoke including Jamie Gauthier, Helen Gym and Kenyatta Johnson, who all denounced Biden’s treatment of Haitian refugees at the Texas border last week.