September 19 — Striking Nabisco workers at six locations across the country voted “yes” to the latest contract offer by the owners, Mondelēz International. However, the overwhelming sentiment expressed by strikers in Portland was a resounding “No!” 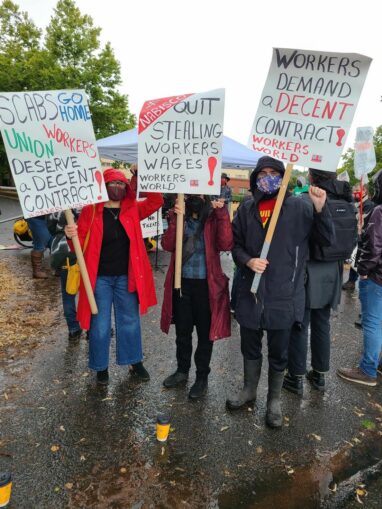 Mike Burlingham, vice president of Portland’s Bakery, Confectionery, Tobacco Workers and Grain Millers International Union Local 364 told this reporter, “Their contract is the first step in dividing workers.” The new contract will allow “Monster-lez” to deny overtime pay to workers on regular 12-hour shifts, working three days in a row on weekends. These less desirable shifts will punish newer workers and could sow division between junior and senior workers.

Every worker at Portland’s Nabisco plant walked out Aug. 10 — 200 BCTGM bakers and those on other union jobs, including Teamsters union members, engineers and electricians. Solidarity for the 24/7 picket line grew throughout the strike to include Portland city commissioners, celebrities and workers from dozens of unions.

The huge show of unity helped force the company to concede some benefits: no change in their health plan, a pay raise and an increase in disability benefits. But Portland strikers urged Nabisco workers in all locations to reject the contract.

Sharon, who worked at the company for 53 years said at a Sept. 18 rally, “the company is so sneaky and dirty, trying to pull things off behind our back.”

Mondelēz tried to give some workers bonuses directly instead of bargaining with the union. Sharon explained that workers at the plant “have always been a team that took pride in our work. The company is destroying that feeling of comradery. Every time you divide people, you make us weaker.” 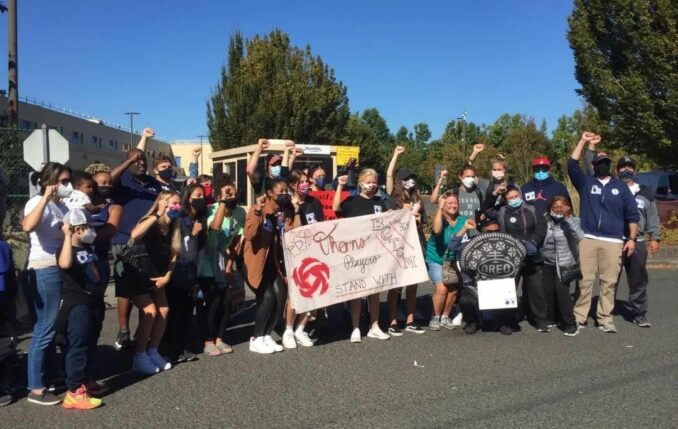 Portland’s professional women’s soccer team, the Thorns, joined the Nabisco picket line Sept. 14. “We’re out here because you guys are fighting a lot of the same battles we are,” said player Emily Menges. She was referring to the U.S. Women’s National Soccer Team’s current fight for salaries equal to the Men’s National Soccer Team. She added, “When professional athletes and factory workers at a bakery in North Portland can find common cause, I gotta tell you, we’re gonna win this thing.” (tinyurl.com/f7jjy2ys)

“Those ladies are kick ass,” said Burlingham. “They marched the length of Columbia [3 blocks] and stood their ground, while the vans and buses were trying to bring in scabs and baking supplies into the plant.”

Community action forced Mondelēz to drop a restraining order against the union for preventing scabs and supplies from entering the Nabisco plant. Company attorneys had to admit that the actions were performed by outside supporters and not by union members.

Jesse Dreyer, a Portland Teamster, filed a federal lawsuit for assault and battery on Sept. 14 against Huffmaster, a strikebreaking company hired by Mondelēz. Dreyer said a Huffmaster guard punched him in the head while he was picketing. A video of the incident shows Dreyer being pushed against a van for several minutes by the Huffmaster guard.

Shad Clark, BCTGM Western Region Vice President, told this reporter that “Mondelēz has been exploiting Nabisco workers here at the expense of their workers in Peru, Argentina, Egypt, Venezuela. Workers at Mondelēz plants in Australia have currently gone out on strike; and five years ago, Irish workers walked out of a Mondelēz plant in Ireland.” He said, “Mexican Nabisco workers make less than $1.00 an hour, but in some countries conditions are worse.”

A speaker at a rally Sept. 18 said, “Mondelēz is international, but so is the working class.”