The 9/11 commemorations should be seen for what they are: an opportunity for the U.S. ruling class to use a collective trauma — the attack on the World Trade Center in New York City — to whip up jingoist and superpatriotic sentiment. The goal of this whipping up is to convince much of the population to rally around the U.S. flag and support Pentagon military intervention anywhere in the world. 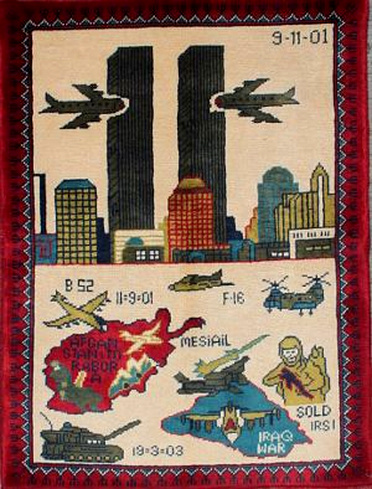 This Afghan rug shows the connection between 9/11 and U.S. aggression in Afghanistan and Iraq.

In this 20th anniversary year, the propaganda onslaught is coated with the balm of an appeal to national unity. In 2001, the ruling group in George W. Bush’s White House used the trauma to declare a “War on Terror” — as a pretext to unleash wars of terror on the people of the world.

That’s no exaggeration. According to the latest 2021 figures, issued by the prestigious Watson Institute of Brown University, U.S.-backed wars since Sept. 11, 2001, have killed a minimum of 929,000 people in battle, with multiples of that number dying from conditions created by the wars. They have transformed a minimum of 38 million people into refugees, driving them from their homes with only their clothes, starving them and their children. The numbers include victims in Afghanistan, Iraq, Pakistan, Yemen, Somalia, the Philippines, Libya and Syria, for which both Republican and Democratic administrations can be blamed. (tinyurl.com/4jytx9s8)

The Bush administration’s neocons and their successors in the Democratic administration had a goal. The goal was to reconquer, for imperialist domination, parts of the world that had achieved a certain amount of sovereignty.

The existence of the Soviet Union until 1991 had, in most cases, defended that sovereignty from direct imperialist intervention. With that defense now removed, the Empire has been waging war to replace its yoke firmly on the backs of the world’s people.

Whether refugees from this U.S. strategy fled inside their own countries, fled to neighboring states, or tried to make it to wealthier places in Europe or the United States, each one has a tale of human misery. Each piece of suffering was caused by imperialist strategists seeking obscene profits.

Recall the official public details of the September 2001 attacks. Saudi citizens in Al Qaeda, allegedly angry over the U.S. occupation of their country since 1990, targeted symbols of imperialist power: Wall Street financial capital, the Pentagon war machine and probably the U.S. Capitol. Biden just visited the World Trade Center memorial, the  site of a plane crash in Pennsylvania connected to the September 11 attacks and the Pentagon.

Bush’s gang punished none of its Saudi allies. Instead, they wielded the popular trauma like a club. They first invaded Afghanistan, then invaded and occupied oil-rich Iraq. In the name of a “War on Terror,” the Bush administration and, following it, Barack Obama’s Democratic administration intervened with weapons or fighters in the countries named in the Watson study.

Trump followed by making threats against Iran and the Democratic People’s Republic of Korea and imposed murderous sanctions on many other peoples, including those of Cuba and Venezuela — stretching beyond all recognition the concept of “War on Terror.”

Biden has finally withdrawn all U.S. troops from the impossible war in Afghanistan. Even there, in the last moments, a U.S. drone strike hit an Afghan man working for a humanitarian NGO, killing him and seven children in his family. The Pentagon had claimed this was an Islamic State terrorist target. The war ended as it began – with a big lie.

The 9/11 attack on symbols of U.S. oppression also had human victims — a real cross section of the U.S. population worked in the World Trade Center, including all types of essential workers who maintain buildings, serve and clean up food, as well as every type of office worker, of all beliefs and from all parts of the world including all oppressed nationalities, gender identities, able-bodied and disabled. People who wrote then and continue to write for this newspaper worked at the WTC or near enough to share the risks and the trauma, and we mourn the victims.

These losses make us even angrier at U.S. strategists who use the anniversary to again manipulate the feelings of people here, hyping up a false national identity to build toward the next imperialist war.