George (Geo) Ciccariello-Maher’s “A World Without Police: How Strong Communities Make Police Obsolete” is both one of the most compelling arguments for police abolition and a complete depiction of the nationwide George Floyd uprisings (and events around this historic time of rebellion) to date. Using extensive historical and contemporary evidence, Maher shows that violence meted out by police on people of color and the working class is inherent in the institution and therefore not something to be adequately addressed short of outright abolition. 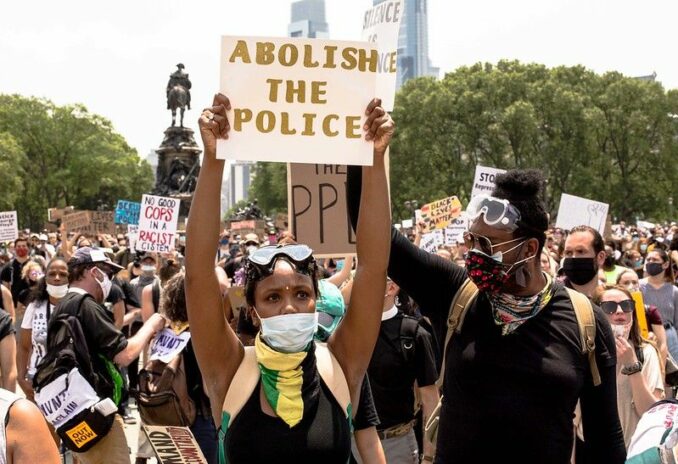 This ongoing struggle is not simply a matter of doing away with the police. It implies the creation of alternative structures, which truly protect and empower working-class communities of color. As Maher states, “Today, as a century ago, the positive, creative face of abolition, the building of a world we want to see — of security, equality and freedom — is inseparable from the process of destroying those relics of that past that continue to stain our present. Abolition is a tight spiral, a double helix, of both processes.”

The abolitionist cause is a struggle not only against the police but the entire white-supremacist superstructure (e.g. political, legal and cultural institutions) of capitalism. It is not the cops alone that perpetuate the systemic violence upon which U.S. capitalism relies, but the entire pig majority.

As Maher states, “The pig majority includes the police, but it exceeds them as well. It comprises all those volunteer deputies eagerly doing their violent work alongside them. It is the judges, the courts, the juries and the grand juries. It is the mayors and the district attorneys who demand ‘law and order’ and denounce those who protest police brutality as ‘mindless rioters and looters.’ It is the racist media apparatus that bends over backward to turn victims into aggressors and — above all when the former are Black and the latter white — killers into saints.”

Maher thoroughly debunks the idea that our carceral institutions can simply be reformed. While acknowledging the benefits of reforms which legitimately weaken the power and impunity of police, Maher argues that the more “reformist reforms” act as a backstop to systemic change — a “perennial containment strategy of an imperiled system.” Reforms, such as increased training, are an “alibi” those in power fall back on when public pressure grows.

Maher characterizes this cycle as: “Another instance of brutality, another rebellion, another series of commissions, another set of useless proposals that don’t grapple with the reality of police power.” He demonstrates this recurring process at work throughout the history of the white-supremacist institution of policing.

He also argues that police reform not only misdiagnoses but actively contributes to the problem. This is apparent in the aftermath of the George Floyd uprisings, when politicians created the George Floyd Act, which included an additional $750 million earmarked for police. In the hands of the white-supremacist and capitalist state, police reform is about managing public perception rather than addressing police violence — an act that would undermine the power of the capitalist state by diminishing its primary means of enforcement and coercion.

The book invites readers to consider what an abolitionist future would look like and provides several practical steps already taken toward this end in the strategies of communities to ensure their own collective safety and well-being. These include the self-managed security collectives, such as those that sprang up in Minneapolis communities in 2020; transformation of occupied hotels into shelter for the homeless; and the long-standing traditions of self-defense and grassroots social services in working-class Black communities.

Maher points out that examples abound outside the U.S., such as in the autonomous Zapatista-controlled area of Chiapas, Mexico, and the grassroots militias that protected Venezuelan neighborhoods from the intertwined violence of the drug trade and police prior to the country’s Bolivarian revolution.

Born out of the struggle against capitalist state violence, communities in the U.S. and abroad are constantly taking their destinies into their own hands and building from the bottom up structures outside of and at odds with the international capitalist order. All these examples provide a glimpse of a more just and equitable world which is already being built little by little, day by day, by the world’s exploited and oppressed masses.

For years to come, this book is sure to be a key abolitionist text for activists and organizers. Supported by extensive historical documentation and journalistic rigour, it is an invaluable testimony to both the role of police as “a violence machine that produces brutality, impunity and corruption with every turn of its gears” and an undying commitment to building a world without police.