This Aug. 25 interview with Claudio Katz, Argentine member of Left Economists and political analyst, was published in lahaine.org and translated by Michael Otto. 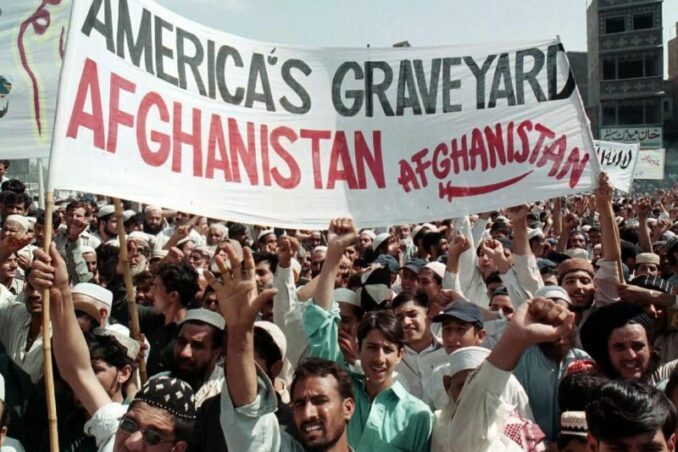 Pakistani protesters rally against the U.S. invasion of Afghanistan in Karachi, Fall 2001.

Mario Hernández: The images of Saigon come to my mind, regarding the situation in Afghanistan. Only the images, because I do not have the same ideological identification with the Taliban. But undoubtedly this withdrawal of U.S. troops from Afghanistan reminds us of the defeat of imperialism in Vietnam. What do you think about it?

Claudio Katz: First the obvious: It is another defeat, a fiasco and a total humiliation of U.S. imperialism. The army they had trained with Special Forces deserted; their puppet government disintegrated, and there was an abrupt flight of everyone who worked for the Pentagon. The images you mention are pathetic, of helicopters, airports overwhelmed by a mass of people desperate to escape. A striking image.

I would say that we have to remember that the negotiations with the Taliban that [President] Joe Biden was carrying out, and that Donald Trump had started, collapsed, because these presidents had already concluded a long time ago that the U.S. had lost the war. They expected to keep some contingents of U.S. troops in place, but everything was left up in the air. It was a crushing defeat.

The U.S. was unable to win a war during two decades in which it had deployed 200,000 troops and spent $35 billion per year.

First, what is relevant is that this lightning withdrawal demolishes all the lies spread by the U.S. for so many years. We now know that they did not invade in retaliation for the attack on the Twin Towers — because that crime was committed by a Saudi network — not by an Afghan network. Osama Bin Laden [head of al-Qaida] was not an Afghan. And Biden admitted that the U.S. never intended to create a democracy. It’s what we always knew.

The U.S. occupied Afghanistan because of the strategic location of that country, which is very close to China and Russia, crisscrossed by all the routes across Central Asia. The U.S. did not go there to modernize the country. They installed military bases that were financed on the ground with the production of opium and heroin, which expanded significantly during all these years of NATO presence.

Nor was the goal to fight terrorism. We recall that the mujahideen who preceded the Taliban were fabricated by the CIA in 1978 to destroy an Afghan government that was secular, progressive and allied with the USSR.

And, of course, the U.S. never defended women, even to the extent that in recent years they have been dealing with the Taliban, who operate a network of buying and selling of women with unimaginable degradation.

What Washington really wanted to do with the Taliban was to arrive at a coexistence similar to the one it has with the theocratic regime of Saudi Arabia, which oppresses women in a very similar way that the Taliban does.

The abrupt retreat created a crisis scenario with everyone blaming each other. Boris Johnson disagrees with Biden. Trump has resurfaced, and the Yankee generals don’t know what to say. The U.S. confronts a dilemma: Either maintain a tough stance to see if they can regain lost international space — or seek to negotiate with the Taliban, which could help the U.S. save face by manufacturing the image that they have changed and become more reasonable.

Let’s see what the Taliban do, because there is a new generation of leaders. Let’s see if they disguise their fanaticism or plunge the country back into the Middle Ages, dominated by the most reactionary religious law.

I think these Taliban now are not as isolated as the Taliban of the past generation. They have many agreements with Russia. Putin is very pragmatic, and he made arrangements with the Taliban, as he wants to distance them from the terrorist groups that are closer to Saudi Arabia. Above all, the Taliban have signed many agreements in recent years with China. The country has already been incorporated as a de facto member of the Silk Road.

MH: Because it is a strategic location.

CK: To let the gas pipeline pass through there, as it were. So, I would say that the fall of Kabul is a geopolitical fact, with consequences that we will see later. In the immediate term, it severely affected Biden’s domestic program, which was for a Keynesian revival and the coordination of an international bloc against China. But in order to carry out his program, he needed political oxygen, and that oxygen has been sucked out with this defeat in Afghanistan.

I would like to make a final point. We must be very careful with the analogy that is being made all the time with Saigon in 1975.

MH: I am referring only to the images.

CK: Precisely because of that. Because there are many images that are similar. The abrupt departure from the two places is so similar, even the very role-playing that Biden did, promising that the escape from Saigon would not be repeated. But as you well warned, be careful with the comparison because the only thing they have in common is the imperialist failure. Everything else is totally different.

In Vietnam the revolutionary forces triumphed, and in Afghanistan it was the reactionary militias. The Taliban are the absolute inverse of the Vietcong. It is a band of troglodyte clerics, who are the opposite of a liberating army. The medieval oppression that they promote is the antithesis of an emancipatory project of communism. What we have is a defeat of imperialism, not a triumph of anti-imperialism in this case.

Likewise for Latin America this is good news, because any defeat of imperialism on a global scale widens the margin of autonomous action within our region, because it restricts the aggressive capacity of the U.S.