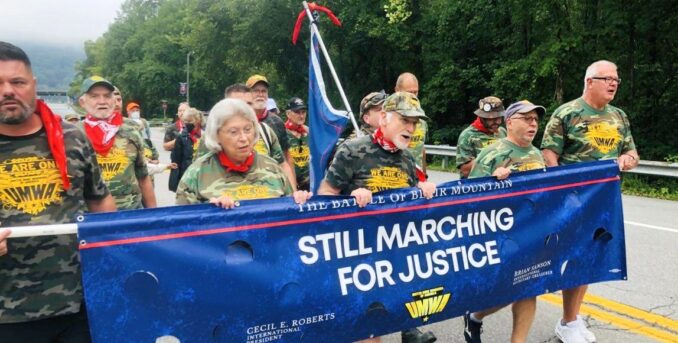 The Battle of Blair Mountain was the longest and most violent clash between two sides within the U.S., aside from the Civil War against the slavocracy. As with any class struggle, the Battle at Blair Mountain developed through a dialectical process.

In 1920, thousands of coal miners of many nationalities in Mingo County were organizing and went on strike against very exploitive conditions. At that time, 90% of coal miners in West Virginia were forced to live in company houses inside company towns that were operated by coal bosses. Mine workers were limited to shopping at company-owned stores with company-issued money known as “scrip,” and they were forced to send their children to company-operated schools.

In some instances, women were subjected to sexual abuse by company town officials, in exchange for scrip. (Appalachianhistory.net, 11/6/13) According to Dr. Chuck Keeney — great-grandson of Frank Keeney, a socialist labor leader and a key figure in the Blair Mountain Battle, “West Virginia had the highest percentage of company towns than any other state.” (The Valley Labor Report, April 5)

After miners began to organize, they were kicked out of the company houses and forced to form tent colonies along the Tug River. In June 1921, coal bosses hired the West Virginia State Police — an outfit created for the specific purpose of busting miners’ strikes — to ransack, raid and surround the tent colonies with guns pointed at the miners and their families. A Black miner named Alex Breedlove attempted to surrender, but the racist, union-busting agents shot him down as his hands were raised in the air. The cold-blooded murder enraged coal miners across the state.

The evictions and murders carried out by the coal barons led one Mingo County police chief, Sid Hatfield, to cross class lines and side with the mine workers. Hatfield participated in a gun battle against union-busting gun thugs from the Baldwin-Felts agency in the town of Matewan, which is fairly depicted in the John Sayles movie with the same name. Soon after, Hatfield was falsely charged in a conspiracy of shooting up a nonunion mine camp in nearby McDowell County.

On Aug. 1, 1921, Hatfield and Ed Chambers, one of his officers who also sided with miners against gun thugs and state police, were set for a trial in the McDowell County town of Welch. On that morning, both were shot dead in front of their spouses by Baldwin-Felts goons in Welch on the Courthouse steps. Hatfield and Chambers were the only two police officers in U.S. history recorded to have sided with workers against their class enemies. For that they were murdered.

In late August, thousands of armed coal miners formed an encampment in Kanawha County, close to Charleston. Sporting red bandannas and identifying themselves as the “Red Neck Army,” thousands of Black and white coal miners marched south, starting in the Kanawha County town of Marmet. Many were Italian immigrants. 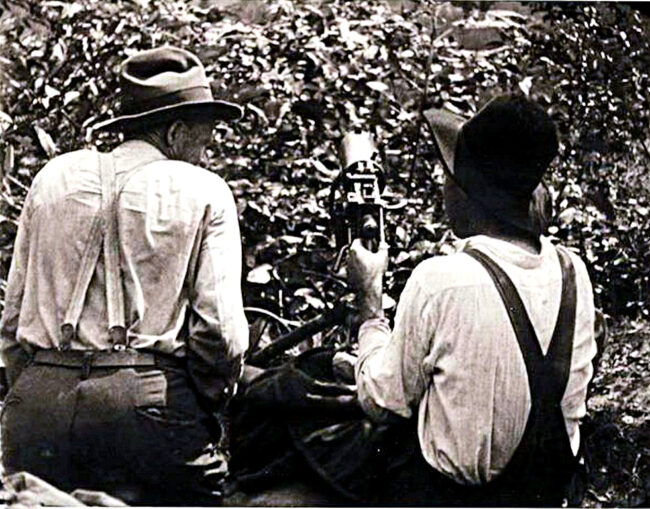 Unfortunately, the miners could not reach their intended destination as they were confronted by the notoriously anti-union Sheriff of Logan County, Don Chafin. Chafin was known by the miners for trying to shoot up the United Mine Workers Union District 17 headquarters in a drunken rage in 1919. He ended up shot but to the miners’ detriment, he survived.

Chafin confronted the Red Neck Army with his own private army of deputies known as the “Logan Defenders.” It was at that moment the battle ensued at Blair Mountain. Chafin’s army even flew planes that dropped homemade bombs. Luckily, the bombs did not hit their targets, but people were shot and killed on both sides.

Following the Battle of Blair Mountain, hundreds of miners were indicted on charges of murder and treason. Many other mine workers were blacklisted and red-baited to the point where even their family members were denied employment in the state, forcing them to leave.

Public school textbooks have intentionally omitted mention of Blair Mountain for the same reason they have historically ignored the Tulsa massacre, as well as other examples of genocide and murder committed by the U.S against workers and people of oppressed nations.

The “Battle of Blair Mountain Centennial Kick-Off” was held Sept. 3 at the Civic Center in Charleston. Progressive and labor organizations, ranging from the UMWA to the anarchist-oriented PM Press, had information tables. Events in several parts of the state led up to the kickoff.

Throughout the Labor Day weekend, there were art exhibits, teach-ins and reenactments, including one of the shooting of Hatfield and Chambers at the courthouse in Welch. There were storytelling dinners with food from that era and a free screening of Sayles’ “Matewan.”

This author attended an event sponsored by the West Virginia branch of the Industrial Workers of the World at a Unitarian Universalist Congregation church, where a pro-union band from Minneapolis called the Wooden Shoe Ramblers played. Using old-time instruments with a folk and blues style, they sang not only songs related to Blair Mountain but also songs about George Floyd and the Greensboro Massacre, as well as their own unique rendition of Paul Robeson’s “Old Man River.” A song that received the most enthusiastic applause was about the 2018 education workers’ strike that started in West Virginia and carried over to other states. 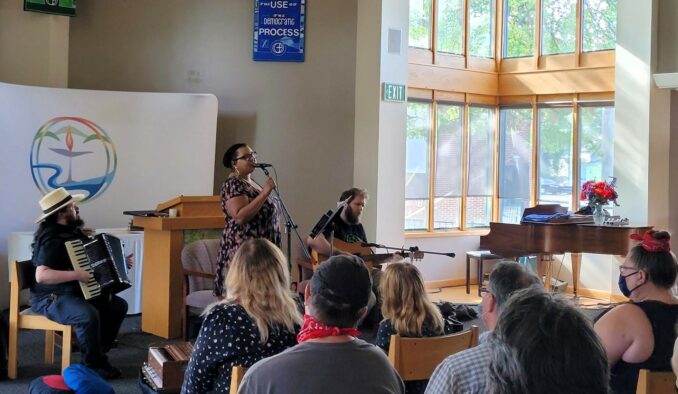 Workers World spoke with one of the WV-IWW organizers, Brendan Muckian-Bates, who said, “Our local in this state wanted to participate in the activities, because we wanted to honor the legacy of those miners from a century ago by using the power of a song, a Wobbly tradition, to remember the past and inspire us to future action.”

Another event on “The Legacy of the Red Bandanna” was presented by various groups such as the Steel City John Brown Club and the WV United Caucus, which is a rank-and-file caucus of education workers that formed because of the 2018 strike. WV United Caucus member Nicole McCormick spoke about the significance of defiant education workers wearing red bandannas as a symbolic gesture of solidarity, just as the miners did during the Battle of Blair Mountain.

UMWA marches to commemorate the Battle, solidarize with Alabama miners

Also Friday, Sept. 3, the UMWA started a three-day march, starting in Marmet in Kanawha County and ending up at a UMWA Hall in Logan County Sept. 5. The march was led by UMWA International President Cecil Roberts.

On Sept. 6, the UMWA held its 83rd annual Labor Day rally in Racine, located in Boone County between Kanawha and Logan Counties, where the historic march began and ended. While attendees emphasized the 100-year centennial of the Battle of Blair Mountain, they also showed strong support for their union siblings in Alabama, who have been on strike at Warrior Met Coal Inc. for close to six months.

As forces of reaction continue to attack the working class — whether it be through attacks on abortion rights or through the forced separation of migrant families — for our class to successfully fight back, it is important to honor and study historic struggles such as the Battle of Blair Mountain!