In December, 1981, Bobbi Campbell, a nurse and a gay man from Tacoma, Wash., then living in San Francisco, became the first person with Kaposi’s sarcoma to go public with his diagnosis. People infected with HIV who develop AIDS frequently contract KS. 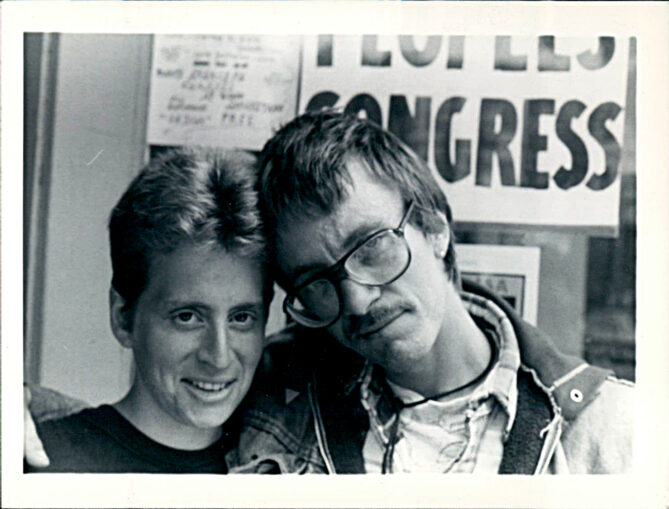 By this point, the “rare cancer seen in 41 homosexuals,” barely mentioned in the New York Times in July 1981, had become widely known as the “gay cancer.” Even health officials called HIV/AIDS this unofficially, as if there were some scientific merit to that naming.

At the time, KS was being discussed widely only in New York City. In San Francisco, coverage remained largely elusive. In October, two months before Campbell publicly announced he had KS, he went to the Walgreen’s pharmacy in the gay Castro District armed with photos of his KS lesions and taped those on its windows. His messages encouraged other gay men who had the lesions to immediately be seen by a doctor.

With Campbell’s public announcement came his realization that not nearly enough was being done in San Francisco to bring about awareness of the illness and combat it. He took it upon himself to swing into action. (bit.ly/2TMKzBj)

In February 1982, Dr. Marc Conant, whose first KS patient had been Bobbi Campbell, invited him to a meeting with other doctors and activists. This became the nucleus of the Kaposi’s Sarcoma Research and Education Foundation established by Cleve Jones — a former intern of Harvey Milk, the gay activist and San Francisco’s first out gay city supervisor who had been assassinated in 1978. The group later changed its name to the San Francisco AIDS Foundation. Campbell, who quickly joined the Board of Directors, told Jones, “Nobody’s doing anything. We’ve got to get people organized.” And they started to do just that.

Other San Francisco organizations began springing up in opposition to the U.S. government’s lack of response to the ongoing epidemic. People With AIDS was founded there by Bobbi Campbell in 1982 and became the first local group run by and for people with AIDS.

By 1983, Campbell was part of a larger national grouping that drafted The Denver Principles, the first manifesto of the AIDS Self-Empowerment Movement that sought to establish equal rights for people with AIDS, as well as demanding that PWA not be scapegoated or blamed for the epidemic. The principles called for greater transparency in the medical field in dealing with PWA and for solidarity between PWA and people not living with AIDS.

On May 2, 1983, PWA and other organizations held the first-ever candlelight vigil in San Francisco for those who had died of AIDS. Some of those present carried a banner, “Fighting for Our Lives,” which became a popular slogan in the HIV/AIDS struggle. More than 10,000 people attended.

All the while, the Reagan administration continued to ignore and even mock the tens of thousands who were organizing and mobilizing against a plague that was killing them.

In July this writer interviewed Workers World Party Bay Area member Joanie Marquardt, who lived in both Los Angeles and San Francisco during the early years of the epidemic. She emphasized that early organizers in the HIV/AIDS epidemic were veterans of the anti-war, anti-imperialist and anti-racist movements of the 1960s and ’70s. They were queer people who had protested against the Vietnam War and the U.S.-backed coup that overthrew democratically elected President Salvador Allende of Chile.

They were queer people who had participated in the 1979 White Night Riots, after the acquittal of former cop and Supervisor Dan White, who shot and killed Harvey Milk and San Francisco Mayor George Moscone in November 1978.

As the U.S. capitalist class let hundreds and eventually thousands of working-class and oppressed persons suffer and die of HIV/AIDS, gay and bisexual men were those who were primarily affected at the beginning of the epidemic.

Organizing shifted to militant queer mobilization against the mass murder of queer people. The lessons organizers had learned from the anti-racist, anti-imperialist movements of preceding decades came into play. As more deaths surged, more militant mobilizations did as well. For instance, AIDS Action Pledge was founded in San Francisco to conduct actions to raise awareness and demand treatment for AIDS. AAP became ACT UP San Francisco in 1987.

In July 2021 this writer spoke with Stephanie Hedgecoke, a Workers World Party member who lived in San Francisco during this period. Hedgecoke recounted how the AIDS-Related Conditions (ARC) Vigil began in 1985. This protest started when two men with HIV/AIDS, Steven Russell and Frank Bert, chained themselves to the door of the Federal Building in U.N. Plaza in San Francisco to demand the U.S. government stop its policy of inaction and apathy towards the epidemic.

The ARC protest lasted over 10 years, until 1995, becoming a full people’s encampment in the U.N. Plaza, complete with counseling, food, health services and information on risk prevention. The participants consisted largely of homeless gay men who were constantly subjected to anti-gay harassment and ridicule by passersby. Fortunately, the solidarity of the people of San Francisco was stronger than the attacks of the few, and the encampment was kept stocked with food, blankets and other supplies.

Demands of the AIDS/ARC Vigil included $500 million for AIDS research, benefits for people with AIDS-related conditions, Food and Drug Administration approval for U.S. physicians to prescribe treatments available in other countries — and for Reagan and his administration to condemn discrimination against those with AIDS, AIDS-related conditions and all affected groups.

The year the AIDS/ARC Vigil began, Reagan backed spending $286 billion on the military alone. (bit.ly/3xB9DZI) That the ARC protest lasted long after the Reagan presidency tells one whether the vigil’s demands were met or not.

Despite the radical origins of many of the San Francisco organizations, the early formations were hesitant to embrace a socialist perspective. Many participants believed that entry into the Democratic Party was the key. But over time, as militant resistance grew, a movement was born, with thousands and eventually millions of people demanding free housing, free treatment and free health care for people with HIV/AIDS.

Ellen Catalinotto, who contributed to this article, worked for 22 years as a midwife in New York City hospitals, where she participated in research that led to the first breakthrough in preventing mother-to-child transmission of the AIDS virus. Devin Cole is a transgender Marxist organizer and writer. They are the president of Strive (Socialist Trans Initiative), a transgender advocacy organization in northwest Florida and a member of the Workers World Party – Central Gulf Coast (Alabama, Florida, and Mississippi) branch.