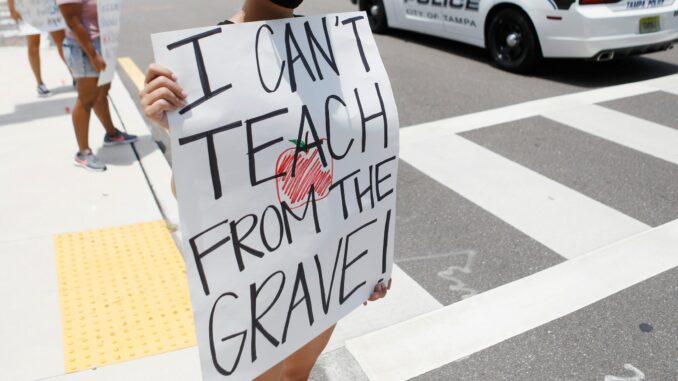 In 2020, Tampa teachers protest over lack of COVID protection.

Schools are reopening in September for tens of millions of students; more had already opened in August. Many students are entering the building for the first time in a year and more, after having little or no provisions for distance learning from home. Their educational needs conflicted with parents’ nervousness about the COVID pandemic. The risk of infection remains high.

The students want to go back for their education. But they are being ordered back because the Biden administration demanded a reopening of the capitalist economy at the beginning of July — despite a raging pandemic. Arbitrary decisions to reopen the schools were made even earlier.

A big contradiction here is that none of the masked or unmasked 5 to 12 year olds entering the schools are vaccinated. But COVID is spreading across the country worse than before. It does not make sense to put young students including teenagers into crowded classrooms. But many school districts are intent on reopening with plans that are not adequate for the dangers posed to youth and children by the Delta variant.

Indeed, the U.S. health care system is faltering. Hundreds of nurses have died of COVID. Around 1,500 national guard troops with teams of health care staff are being sent into Oregon hospitals, and Idaho has called in troops and 220 medical workers to assist overwhelmed hospital staff. (The Guardian)

The highest rates of COVID infection and deaths are across the South, where Black and Latinx people are disproportionately affected. Oxygen supplies are running short in the South.

The lack of FDA approval for vaccines for children 12 and under is risking COVID exposure for this age group as they return to the classroom. Youth and children do not seem to have priority, nine months after the first vaccine was made available.

Protests by school teachers along with students and communities helped stop the opening of public schools in 2020 during the pandemic. Unfortunately, the Trump administration abandoned the teachers, parents and students — just as he abandoned the overall fight against the pandemic.

President Joe Biden, having won a capitalist election, wants to be seen as the big leader of the fight against COVID. He’s trying to shore up and save the capitalist system at the same time. But he ordered the reopening of the economy in July with little or no protections for workers. Since then the coronavirus pandemic has surged to new levels.

The hoped-for economic recovery has slowed due to the pandemic. Federal pandemic unemployment benefits for 9.2 million workers were terminated. The eviction moratorium affecting millions of workers ended in August. The Biden administration hasn’t done anything to stop the anti-worker attacks.

Joe Biden and Democratic governors can’t stop COVID, because they are tied closely to the capitalist system. The people are being abandoned just as they were under Trump. Students, along with their teachers, bus drivers and other school workers, should not be made to basically walk a tightrope to go back to school!

But Peoples’ China has shown the way to stop COVID and have economic prosperity at the same time. Only 5,000 people in China, which is four times bigger in population than the U.S., have died of COVID. In the U.S. the deaths are around 650,000. In China a great social mobilization of the working class stopped COVID. That’s not authoritarianism, that’s mass participation with workers’ solidarity.